I've greatly enjoyed participating in the Blogging from A to Z Challenge over the past few years.  I took a break from it in 2014, but I gave it another spin in April & May 2015.

My 2015 posts were centered around the theme of Fiery Manifestos, but I extended that to also include some manifesto-ish songs, poems, and codes of life.  Here's what each post was about:

For April 2013, my theme was "An A to Z of Masters of the Imagination that You Oughtta Know About."  In other words, on each day I profiled a person whose brains were just overflowing with weirdness and creativity.  Here's a list of the posts:

My theme for the 2012 challenge was "An A-Z of Symbols, Glyphs, and Sigils... To Enrich Your Games and Lives!"  The general idea was to discuss one specific SIGN or SYMBOL per day, with examples of how it can spur ideas for making one's games more enjoyable.  The posts sometimes veered off into esoteric and philosophical places, but I tried always to keep my feet on the gaming table, too.  :-) 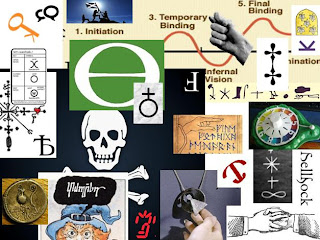