Much of the history of this blog has been about my getting re-acquainted with old-school role-playing games like Dungeons & Dragons.  I still haven't gotten back into the groove with an in-person group, but I haven't ruled it out.  If I do decide to take the reigns and perform as the world-building "Dungeon Master," there's one aspect of it in which I've decided to go decidedly new-school...

I'll need a computer at the table.

This may be sacrilegious to some, for whom anything beyond "paper, pencils, dice, and the imagination" is no-go territory.  I'm happy to stick with low-tech for a lot of it, but in order to weave a world worthy of capturing the attention of players, I'll need to have a spare brain on call.

So with apologies to the non-D&D-types out there, I'd like to use this post to archive my current ideas for what I'd consider the ideal set of software tools to have at the gaming table.

The name for this project, up in the title to this post, came to me upon hearing of the sad passing of actor James Garner, who played a character that inhabited the kind of world -- i.e., never boring, always on the cusp of adventure, yet grounded in flavorful verisimilitude -- that I'm trying to help build with these tools.  (If you don't know the appellation "Rockfish," go find some episodes guest-starring Isaac Hayes as Jim's old pal Gandy...)

RPG insiders will quickly see that the following outline contains tools for building a "sandbox" type world.  This probably all could be done with dice and lookup tables, but the sheer number of random numbers needed makes it ideal for a computer.

For each new day in the campaign world, I'll click a button and it will tell me the following day's
There will be a pulldown menu for me to choose the current terrain type (forest, mountain, desert, etc.), which will influence the
The program should be smart enough to rule out crazy combinations (snow in the desert) but still contain small chances for weird & interesting phenomena (thundersnow, will o' the wisps).  From all of the above, the program will also display customized charts for

This is only for when the players are entering a "new" (previously unexplored) region that I hadn't yet mapped out in detail.  If they've been here before, it will still be the same.

For a new wilderness hex, I'll have a handful of input options that specify its overall terrain type, and whether there are any major features (like coastlines or big rivers) in it.  Then it will generate a set of random landmarks, small waterways, paths, hills, animal dens, and so on.  (Definitely will be inspired by Alexis' work, here.)  These are keyed to the terrain type (e.g., a desert hex may have an oasis; a mountain hex may have a bubbling geothermal vent).  Some weird things -- graveyards? kooky hermits in huts? -- may crop up nearly anywhere.

For a new village, town, or city, it will generate some rough guidelines about the

If a new NPC (non-player character) is called for, there will be a screen that I can refresh to get a description of a random person's


This is the heart & soul of the program... but I've blogged before about what I'd want this to look like.  In short, it kind of unifies several other existing ideas in role-playing games, including

Here we go!  This is my entry in the Songs of Summer bloghop, hosted by the Armchair Squid, Suze, and yours truly.  (I'm posting early, but not as early as Yaz Pistachio did...)  The goal is for each of the participants to post about 5 of their favorite summer songs, so between us we can swizzle up an awesome mixtape of tunes to carry us through the fall and winter. 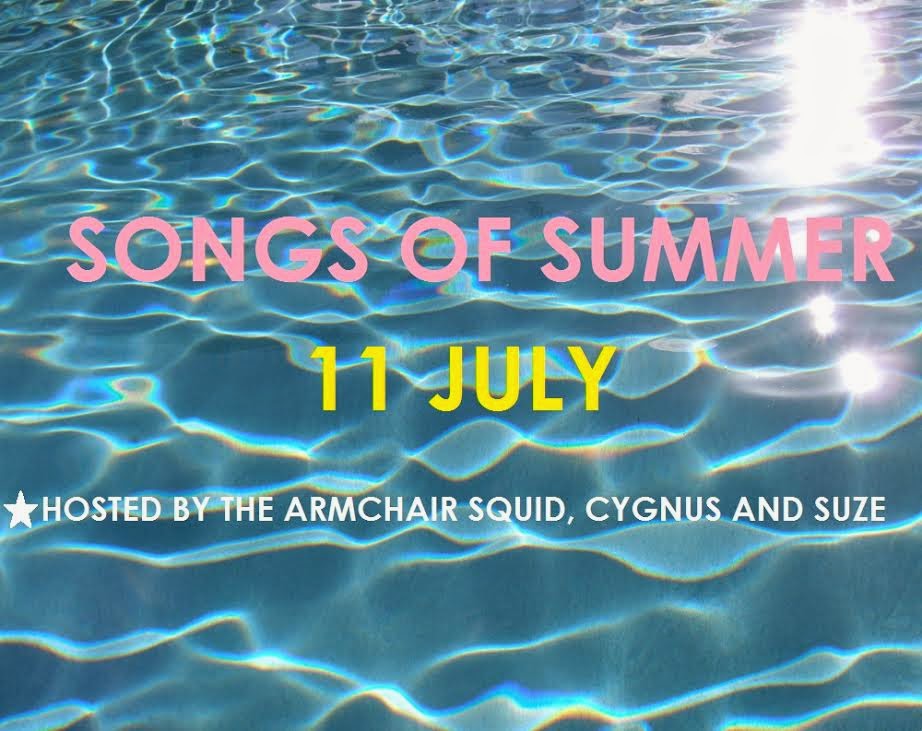 I wonder if summer memories tend to overlap strongly with coming-of-age (high school?) memories.  I could have filled this list, and several more, with songs from just a couple of pivotal years.  You'll see those years represented below, no doubt, but I did try to stretch a bit both backward and forward in time from the days of Bueller and Spicoli.  :-)

1. Under the Boardwalk, by the Drifters.

I grew up just 20 minutes from the Jersey shore, so for me the idea of "summer songs" pretty much requires something that gets sand in your shoes.  It took me a while to figure out which sunny, beachy song would help me get this theme out of my system.  I could've chosen anything by the Beach Boys, of course.  Springsteen's Jersey Girl hits close to home, but the lyrical protagonist is kind of a jerk. The Ramones' cover of California Sun is awesome, but I only discovered it a few years ago.  Nah, I've got to go with this 1964 classic.  It's never gone out of style.  This is the prototype, the patriarch, the Ur-beach-song, for me.

Okay, now let's jump into history.  It's June 1984.  Junior year of high school is ending, and little do I know that this will be the summer that changes everything for me.  More on that in a bit.  All I know in June is that some strange things are going down.  My best friend -- who normally was as straight-laced and nerdy as me -- was rebelling against the system and about to go to summer school for his transgressions (speaking truth to power, I still say).  I'd just had my first "real" kiss, after the Junior Prom, and was about to start working my first "real" summer job.  Life was feeling pretty topsy-turvy.  So, when I saw Ric Ocasek walking on water, crooning about how summer turns him upside down... and is like a merry go round... I knew I had my theme song for the coming months.

Ah, but did I really know what life had in store?  Not quite.  Fast forward to August 1984.  I left my summer job early because I got into a three-week program for future scientists at a local college.  Even my nerdy, D&D-playing friends joked that I was nuts to voluntarily go to anything resembling schoooooool during the summer.

Suffice to say, going away to that program was a defining moment in my life.  For one thing, it helped me discern what I could, should, and would do, career-wise.  That was huge, but it wasn't the most important thing.  It put me in a dorm with 99 other kids who, more or less, were just like me.  Have you had this experience?  The realization that "These are my people," which feels both like a weight being lifted, and like an urge to close your eyes, fall backwards, and crowdsurf?  Down, down, down...

At a weekend dance party, one of these 99 fellow weirdos put on this weird record by a weird band I'd never heard of before, and whose crustacean-ish song I still don't claim to understand.  To this day, though, it brings me back to that time.

4. Your Love, by the Outfield.

I went on to my senior year of high school a changed Cygnus, and graduated in 1985.  Then came college in the fall, which found ways to keep blowing open my doors of perception even beyond what I've mentioned already.  New friends, new things to learn.  And I also had Philadelphia as a playground -- a big city to explore with those new friends.  In early 1986, we got the spring fever bad, and started making firm summer plans probably around March.  I earned some of my worst grades in college in that spring semester, but our many walking trips to the museums... parks... bookstores... oh, anything and everything... of Philly were worth cutting class for.

This silly pop song by a British one-hit wonder band was peaking along with our wanderlust, and I remember sitting back in the dorm room, playing it over and over on vinyl 45 with my two best college friends.  That song (whose lyrics, for some reason, I never cared to think one whit about) cemented those friendships and helped build us into the adults we wanted to be.

I'm not sure if I have a coherent story about this one.  It was released in 1993, and I most associate it with a trip I took to a conference in Quebec in 1996.  Ten years after that Philly spring, I was a graduate student about to defend my PhD thesis and (finally!) go out into the real working world.  This trip was to a drop-dead gorgeous lakeside resort (Lac a la Truite, St-Michel-des-Saints), and we swam and kayaked on that lake in between talking science in the conference rooms.  It's still one of the only times when I've stood with my colleagues under a sparkling night sky and talked about life, love, and stellar astrophysics.  I don't know... something about this song just meshes with that moment.


Nightswimming
Remembering that night
September's coming soon
I'm pining for the moon
And what if there were two
Side by side in orbit
Around the fairest sun?
That bright, tight forever drum
Could not describe
Nightswimming

It's been interesting... and a bit scary... to use music to go deep into autobiography, here.  Apologies if I've blathered too much about peak experiences.  There were of course lows to match the highs, but summer isn't the time to focus on them.

Now, go (blog) hop around to see the other participants, good people!

First, I've noticed that the total view count odometer for Servitor Ludi has just "turned over" at 100,000.  This number is small potatoes for a three-and-a-half year old blog, but I'm proud nevertheless.  Thanks so much to all readers past and present.

Second, I ought to announce that in January 2015, my family and I will be moving.  I've gotten a new job in Colorado, and it looks like our stretch of roughly 18 years in New England are just about over.  That pretty much matches the only other span of time I've spent in one place -- birth to age 18, in New Jersey.  (To quote Archie Bunker, "Nobody wants to live there, but someone has to!")

Does English have a word that simultaneously means "excited," "optimistic," and "nervous" -- with a hint of "scared out of our wits" thrown in for good measure?  Well, let's call it kltpzyxm.  We're quite kltpzyxm about this next step.  :-)