More fun with alphabets can be found by recognizing that English spelling is quite messed up.  Even going back before there even was English, people have been trying to come up with more logical approaches to written orthography.  Last year, I talked about the Roman Emperor Claudius and his suggestions for some new letters.  Those letters didn't survive much past the end of his reign, but the impulse to muck with the status quo has never died out.

Pretty much since the dawn of modern English in the 1500s, there's been a steady stream of advocacy for English spelling reform, some of which was successful (it is a sinne to ghossip), some of which wasn't (I hav to gard the iland).  But for every dozen or so spelling reformers, there were one or two oddballs who suggested that the real solution is to change the alphabet.  Ben Franklin was a proud member of this cabal, too.  I think his suggested letters and ligatures are particularly pretty...

George Bernard Shaw had his own phonetic script, too.  In My Fair Lady, Henry Higgins uses it when trying to make sense of Eliza Doolittle's speech.  There were some other fascinating phonetic alphabets proposed in the 1700s and 1800s, but I'll save those for future posts.

Fast forward to this past century, and we see a few more phonics reforms in schools that had their own alphabets. 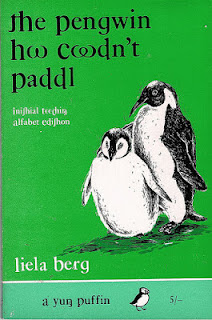 This always struck me as a bit weird, since the goal is to have students eventually unlearn those alphabets and replace them with regular English.

Starting in the 1950s, there was one last attempt to get everyone to switch to something more logical and modern than those hoary old Roman letters.  UNIFON may have gotten its start in the post-war Jetsons era, but it didn't really get much publicity until the dawn of the personal computer age in the 1980s.  It does have a very Apple ][, Bits and Bytes kind of feel to it, don't you think...? 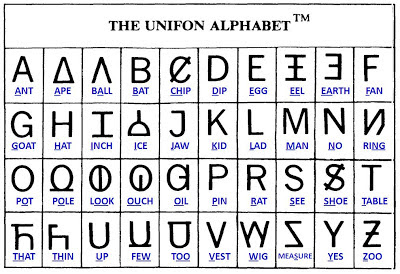 I'd be delinquent if I didn't also mention the International Phonetic Alphabet, which was designed by linguists to be able to accurately record the exact sounds made by a person saying something in just about any language.  With 107 official phonemic symbols plus hundreds of other variants, diacritic marks, and so on, you can distinguish clearly between the accents of Jersey City and Staten Island...

Email ThisBlogThis!Share to TwitterShare to FacebookShare to Pinterest
Labels: alphabets

I'm starting a new mini-series on the blog, wherein I gush geekily about my favorite alphabets, ciphers, and alternate writing systems.  It's sort of related to the theme of my 2012 April A-Z posts on signs and symbols.  In January I unofficially started this series with a post about the Alphabet of Neptune.

Today is all about the granddaddy of all fictional "conlangs" (constructed languages).  In his novels of Middle Earth, J. R. R. Tolkien invented dozens of new languages to convey a sense of otherness about this fantasy world.  In some places, he claimed the languages came first and the world and stories came second -- merely as fulfillment of the desire to "see" people speak the languages!  Most well-known of them, I think, are his "Elvish" languages.  Although the Elves had several different writing systems, the one you may see the most often is Tengwar.  Isn't it gorgeous...?


The letters remind me a bit of the Georgian Nuskhuri script, with maybe a hint of Devanagari (Sanskrit) in places.  Tolkien included many examples of Tengwar in illustrations throughout the books, including an "Easter Egg" containing his own name in the title pages of The Lord of the Rings.

The actors in the Peter Jackson movies got in on the Tengwar love, too.  Eight of the main nine actors all got tattoos of the Tengwar transcription of the English word "nine," to honor their hard work and Fellowship.  John Rhys-Davies (Gimli) may have been a spoil-sport, but Peter Jackson ended up getting one too, and even the awesome Ian McKellen (Gandalf) was up for it...

Tolkien's Elvish scripts may be impressive, but the actual languages he devised may be even more so.  The one I've always loved the most is Quenya, which you can see from its Wikipedia entry has been quite fleshed out and developed by fans.  I don't know how many fluent Quenya speakers there are in the world, but the enthusiasts surely number in the thousands.  Here's an example of some Quenya poetry you can listen to.

To further convey the fey and mellifluous nature of Quenya, let me quote the first part of a famous poem called Namárië ("Farewell"), included in Book II of Lord of the Rings, transcribed and linguistically analyzed by Helge Fauskanger:

In the 20th century, there were several attempts to create new languages to test the Sapir-Whorf hypothesis.  Put simply, this is the idea that the language you speak affects the way you think, and the way you see the world.  Tolkien may not have been thinking about this when he created Quenya and the Tengwar, but I've got to believe that if you had such harmonious sounds (and such flowing letters) swirling around in your brain, it's got to lead to at least slightly more bliss and grace.

Even more:  Could Quenya be the best language to use when attempting to induce ASMR... or trance... or nirvana...?
Posted by Cygnus at 11:21 AM 8 comments:

Excuse me, it seems someone has stolen my [blogging] mojo....

Here's the thing: I've got no shortage of plans and projects for this blog.  But I've also got work -- that's been quite draining lately -- and home -- that isn't draining but also takes its own chunk of the day.  Because of these, my blogging time ends up being concentrated into a few hours right before bed, when I'm usually just in the mood to browse.  Certainly not to write, and usually not to comment that much, either.

So the question is:  how to get back into the groove?  I just took a little stroll through memory lane (i.e., past posts) and reminded myself of some of the projects that I'm hoping to get back to:
The problem with many of these things is that I assign them to the category of "stuff that requires deep thought."  In other words, I have the prejudice that they require fresh daylight time when I've got a nice stretch of hours in front of me.  In other other words, I've got some unreasonable expectations, there.  :-)

The posts that I do tend to churn out are those that, for one reason or another, I don't assign to that "deep thought" category.  Maybe there's some ironic humor in there, since many of my posts probably end up being pretty esoteric and introspective.  But I don't pre-judge them to require the kind of white-hot spotlight of concentration that is reserved for "serious" writing.

So it's looking that I've got two mini-goals for myself...

1. Trick my brain into thinking about the writing of my preferred projects as one-off blog posts, and not components of the Most Important Work of All Time.  Now that I think of it, I wonder if a simple solution could be to just do that writing in the very Blogger composition tool that I'm typing into right now, instead of in the LaTeX-linked text editor that I associate with deep thought (and with work)?  I'll try it.

2. Start a new series of blog posts on something fun and light, so that I can keep to my goal of posting roughly once or twice a week.  Of course, me being me, I know I'll find a way to make these posts pretty esoteric and strange.  My current idea is to profile some strange alphabets and writing systems.  I really love those things.  It's related to what I had fun with for my 2012 April A-Z posts, and I did do one post sorta like this back in January.

(What say you, good readers?  Is it fair for me to ask if you have any specific posts of mine that you think might make for a fun series?)

Anyway, apologies for the navel-gazing.  I do think that writing this all out has helped me to find a bit of extra purpose to continue on....  And, hey, there's that mojo.