To Oz with Urth

In comparison to many OSR bloggers, my Appendix N cred is probably quite low -- I've still never read any Howard, or Leiber, or Moorcock, for example. But next week I'm taking advantage of a loooong series of plane trips to repair one major chink in my fantasy/sci-fi literature armor: I'm bringing all 4 books of Gene Wolfe's Book of the New Sun with me on a business trip to Australia. I've heard great things about Wolfe, and about this series in particular.

Heck, it's been called "Science fiction's Ulysses," which is good enough for me. :-)
In my travels, I often try to read books that are related to my destination. I loved Nadja in Paris, and The Name of the Rose in northern Italy.  But it doesn't always work out... The Fountainhead was my companion in Kyoto, and the cognitive dissonance wasn't too crazy. We'll see the result of having Gene Wolfe at my side in Melbourne!
Posted by Cygnus at 7:45 PM 2 comments: 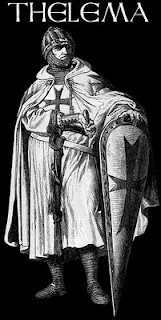 Here's another song by Thelemic rapper Scholar; a.k.a. Christian Fitzharris. The first one I posted is here. To some, it may seem strange to associate the D&D character class most strongly associated with Lawful Good with a spiritual tradition that stems from "the wickedest man in the world," but hey, life is complicated sometimes... :-)


I spit alchemical fire.
Sulfur in my veins and blood.
Battle ready I stand strong awaiting the flood.

Templar!
Trained and initiated.
Duly prepared, empowered on my path, I blast...
Never ending demons to the back get cast and sacked.
Attackin like a rabid pack of wolves.
I bust back with another Gnostic track.
Inflict sick cryptic wicked mantras and metaphors.

The metamorphosis from Narcissus.
Within this chrysalis is like an arsonist may burn away the dross.

Hot coals pop holes.
Revealing the True Self.
Within this micro-chasm of emptiness -- The Abyss.

Choronzon wants a bite.
So I ignite.
Enflame myself commanding energy around me.
Focus! Fear not at all.
Nu my refuge. Hadit my light and so I fight.

Fighters of the rights of Life and Liberty.
Soldiers for the war, draw swords from your floor boards.
Freedom to Fight freedom to organize.
Free to beat the freedom oppressors who keep freedom from being free.

Therion!
Call upon the beast within me.
Triple six sun shone.
Hone the solar On.

"You're too obscure.
"Your thoughts lost on your audience.
"Are you a satanist? What's with the Beast and triple six?"

"Who are you fighting?
"What's the war talk all about?

"Do whatever you want, and flaunt it!
"Irresponsibly compromise, other people's lives."   (pause)

And to finally kill these rumors, once and for all.
Read for yourself the Book of the Law.

Fighters of the rights of Life and Liberty.
Soldiers for the war, draw swords from your floor boards.
Freedom to Fight freedom to organize.
Free to beat the freedom oppressors who keep freedom from being free.

P.S.: I think Scholar has since renounced his relationship with the current manifestation of the O.T.O., but I think he would still approve of the eternal ideals outlined in this song. "Fight On" indeed!
Posted by Cygnus at 8:15 PM 2 comments:

I can certainly grok having fun with crazy new kinds, even if they may be a marketing gimmick in the case of DCC. I can also see that if there's a random resolution with, say, 5 or 7 options that will be rolled a lot (not just once in a blue moon), it's probably worth it to have an honest-to-goodness d5 or d7 around, instead of rolling a d6 or a d8 and treating the highest number as a gentle reminder to "roll again."  Or using a handy conversion chart.

(Full disclosure: Right now in the draft player's guide of Homebrew '82, there is a table in the character generation chapter that calls for a d7. But it's the result of pure laziness! If and when I think of one more entry to add, it will be changed to a d8!)

Have they really been tested enough to ensure that the chances of all sides coming up are uniformly distributed? And I don't mean just sending 100 or 1000 of them down a tube into some kind of dice-rolling box.  I mean real hands holding them and tossing them onto a real table, in similar conditions as real gaming. Look at the direction perpendicular to the triangle for the d5 (or the pentagon for the d7): if that dimension were increased or decreased by even just a few percent, I could see the probabilities shifting majorly.

I should admit, of course, that I have no valid reason to doubt that these dice are statistically "fair." Lou Zocchi has patented the above d5, he has said a lot to justify the high quality of these dice, and Jeff Rients did some additional digging to find out that Zocchi's sales pitches do have lots of truth behind them. It's just that the physics geek inside me cringes when I see those non-isotropic shapes. Is Pythagoras rolling over in his equal-angled grave...?
Posted by Cygnus at 2:07 PM 8 comments:

Harry Potter and the Order of Mystic Mathematicians?

You know the story. An orphan boy is raised in a harsh environment, in ignorance of his true (and famous) parents. He goes to a boarding school where he learns a wide variety of strange and arcane powers. He's much better at using some of these powers than most of his classmates. There's angst. There's romance. Oh, did I forget to tell you that he received a lightning-bolt shaped scar on his forehead in a major battle with someone who will end up being his arch-enemy?

You know the story, do you? Maybe not!

In my earlier post about David Zindell's Neverness novels, I gave a list of other authors with whom one might compare, in order to get a better feel for these books.  I said, parenthetically, "(dare I say J. K. Rowling?)"

Maybe I should have dared a bit more, since as I've been re-reading these books, I realized that the first paragraph of this post accurately describes the protagonist and plot of Zindell's 1993 sequel The Broken God! I'm definitely not claiming anything nefarious on the part of J. K. R., especially since it's on record that she first got the idea for her famous wizarding stories as early as 1990. But it's a fascinating set of similarities nonetheless.

And no, there's no Quidditch in the Neverness universe.  :-)
Posted by Cygnus at 7:30 PM No comments:

Structural Constraints: Too Much vs. Not Enough

This is a Glass Bead Game post, but it might be applicable to the endless debate over "sandbox" versus "railroad" RPG adventures...

A key problem that I've faced when trying to design some kind of real-world variant on Hesse's mythical GBG is the issue of the symbolic language. Hesse's game wasn't supposed to be a free-for-all conversation, where people just talk about comparing and contrasting ideas across various fields. It's supposed to utilize a kind of "universal syntax" that formally allows deep and exact comparisons to be made -- and archived -- between far-flung ideas. But developing such a language is both (1) more than a life's work!, and (2) a pretty high barrier to entry for people to "just" play a game.

Thus, different game designers, eager to have something ready to play in our lifetimes, have taken many different paths with regards to the formal structure of their games. Let's look at two interesting extremes... 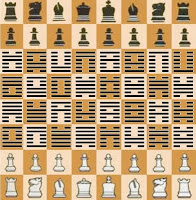 1. William Horden's Intrachange. This GBG variant takes advantage of some deep similarities between the mathematics of the 64-square chess board and the set of 64 hexagrams of the Chinese I Ching. Each move of a possible chess game can be made to correspond with a specific pattern of the archetypal "book of changes." Even the simplest of games has multiple co-existing levels of formal interpretation. I think that delving deeply into Horden's symbolic correspondences would very likely be rewarded with new insights -- but is the effort worth it? 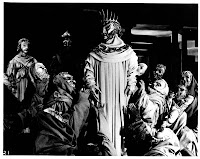 2. Terence MacNamee's Ludus Sollemnis. (No website, but Charles Cameron has archived at least one game here.) Here, a game is presented like a liturgical play. There's a straightforward series of statements made in the game, and each of them can be illustrated by showing a work of art, reciting a poem or other text, playing a song, and so on. People viewing or reading the game are given "glosses" on each item (i.e., instructions for meditating on the item, or links for further research). All of the ways that the items can be compared and contrasted with one another are implied by the dramatic presentation, not stated explicitly.

Two very different approaches! I wonder if these differences have their roots in the famous divide between the Two Cultures of the hard sciences vs. the soft humanities.

Subjectively, I find myself liking MacNamee's approach more, since I often find it hard to follow the "golden thread" through Horden's structures and lists. However, I think the Ludus Sollemnis is still not a perfect fit to Hesse's ideal GBG either... for the same reason that I found Charles Cameron's Hipbone games a bit unsatisfying: still not enough formal structure!

Now, the cliched approach, when presented with two straw-man extremes, is to just blithely say "We need to find a middle ground!" But the devil is in the how! Just like poetry and musical composition, one needs just the right amount of structural constraint and rules, not too much and not too little. One needs to know those rules inside and out (and to know when to break them!) in order to build insightful and satisfying works. A well-designed GBG variant just can't get around this particular Goldilocks problem! :-)
Posted by Cygnus at 7:45 PM No comments: