Yesterday I was commenting on a blog post about the Open Game Licence (OGL) that many old-school game publishers are using when issuing new products. Unfortunately, after 29 comments there appeared at the bottom of the page a message that "New comments are not allowed."  The conversation between two other people was getting a bit heated, so I don't blame host Roger the GS if that's a conscious decision he made.  However, it may just have been an automatic shutdown of comments after a set period of time. (I think that's an option in Blogger...)

Edit:  See Roger's follow-up post, which also has now had comments shut down.

However, I had started composing another reply, and I'd like to now expand it into a full post. The topic may be a bit "inside baseball" for readers not that into the old-school D.I.Y. role-playing community, but c'est la vie.

Anyway, the issue at hand is what kind of legal copyright/trademark/licencing needs to be done when someone wants to publish a document that contains (1) references to Dungeons & Dragons (D&D) by name, or (2) announcements of compatibility with D&D or other related systems, or (3) uses of many of the time-worn terms and tropes from D&D, like armor class, hit dice, and so on. For me, I'm talking mainly about new rule-sets, NOT secondary products that are designed to be used in conjunction with D&D or other "retro-clones."

Many old-school game publishers like to use the Open Game License (OGL) issued by Wizards of the Coast (WoTC), the current copyright holder of D&D. However, several people have raised some skepticism (e.g., here and here) about the need to enter into a contract with WoTC when one isn't publishing anything that is formally connected to a WoTC product.

In yesterday's comment thread, I talked a little about how I've been planning to issue Homebrew '82 without the OGL. I will definitely do more research on this topic, but the one new thing I wanted to do was list a few of the games out there that are also not using OGL. Many of these other games have been talked about quite positively in the OSR blogosphere. Many are similar in spirit to my own project, in that they're at least obliquely inspired by D&D and other 1970s/1980s games, and they use a handful of terms for game mechanics and ability scores from D&D (some of which have definitely filtered into broader usage, too), but they're clearly new and original games. My question to the other commenters would have been something like: "If it's okay for them, then why shouldn't I go that route?"

(I now also want to list these games out of a sense of solidarity... kind of similar to Adam Sandler's Hanukkah Song... here's a list of people who avoid the OGL... just like you and meeeee...)   :-)

I apologize if I've erred in listing products that aren't in fact "similar in spirit" to my own ideas for Homebrew '82, but they all seem like relevant comparisons to make.
Posted by Cygnus at 8:08 PM 2 comments:

Another dip into the Rankin-Bass well before the holidays officially commence... This time it falls on me to report on the existence of a powerful Artifact/Relic that escaped the attention of Gary Gygax when he composed the AD&D Dungeon Master's Guide:  the great axe of the Great Ak, from The Life and Adventures of Santa Claus. 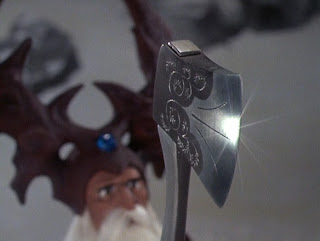 The Great Ak is a Lesser God, serving as the Master Woodsman of the World. The Celts worshipped him as the Master of the Wild Hunt (Deities & Demigods, p. 31), but they mistakenly depicted him with a spear instead of his Axe.

The Great Ak's Great Axe was forged by the first Dwarven king, as a near-twin in appearance to the Axe of the Dwarvish Lords, but with different powers. Its blade has the effect of a vorpal sword, +3 to-hit and damage, with additional chances of instant decapitation on modified rolls of 20 or higher. It does double damage against any type of Demon, including especially the toy-stealing Awgwas and their allies the Goozzle-Goblins. Like the Axe of the Dwarvish Lords, it gradually imparts long life and health on its possessor, but instead of converting a human wielder into a dwarf, it converts him or her into a jolly, rotund, red-cheeked, and white-bearded demigod.

Once per day, the Great Axe can also act as a Wand of Lightning and emit a laser-beam-like ray equivalent to the magic-user spell Lightning: 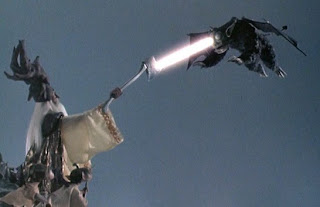 And, of course, ingenious DMs can incorporate a generous degree of gonzo randomness in the usual way as well:

Hat tip to Chris Sims, whose recent post made me aware of the awesomeness of this particular R-B special that I've actually never watched all the way through.  I'd been minorly offended that it departs from the Kringle-centric continuity established in the earlier specials of the 1970s, but I'll definitely have to find it A.S.A.Now!

Final Note: I guess talking about a powerful weapon of war on Christmas Eve is as about as far as you can get from the spirit of Luke chapter 2... but, hey, at least I'm not flooding the web with more posts about Krampus!  :-)
Posted by Cygnus at 6:30 AM No comments:

If there's one scene in the whole oeuvre of Rankin-Bass stop-motion Christmas specials that cries out for a sequel, it's this one:

"The Meisterburgers... they kind of died off and fell out of power."  Really? I always felt that was a bit anti-climactic. Power doesn't just give itself up so easily. I always imagined a sequel, maybe a generation or two after the events of Santa Claus is Coming to Town, in which the Meisterburgers go one step too far in their cruel repression, and they are delivered a fierce beat-down by the Kringles.

This scenario is actually kind of perfect for playing out in a classic fantasy RPG. You've got a beleaguered town in need of saving, a rag-tag group of misfits on the outskirts that is called in to help, and a garrison of low-morale soldiers that may (or may not) obey their evil lord's whims.

Mix that in with the following elements... 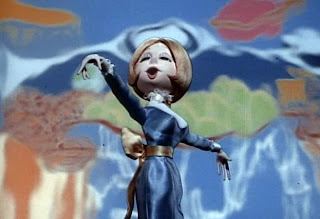 . . . and you've got yourself one memorable D&D campaign scenario!
Posted by Cygnus at 7:48 PM 1 comment:

On this darkest day of the year (at least for those of us north of the equator), I thought a few inspirational words may be in order.  This was written by someone named "Knight Monk" in a LiveJournal group a few years ago.  I'm not omitting any intro; what follows is the entire post:

I am writing about more than sunlight, you know... although the swift-passing window of the Winter Day is no small matter either. These are the shortest days. And for many they are filled with hectic activity. For others they are cold and barren desert of Depression. Lao Tzu writes: "Movement overcomes cold."

Translating this into one's own practice means that during darkest days of Winter, instead of hiding under a comforter and napping all day, one should keep active. Do many things even if you feel like sitting still - this is how one makes it through the worst Winters, even the most terrible Winters of the mind.

The converse also holds true. During the hot days of Summer, or even the most hectic and anxious times of any season, one should seek to still the mind and body. "Keeping still overcomes heat."

The words hold not just literal truth for the thermostat of the human body. Properly applied, the words can govern our moods. They put into the hands the reigns of the intellect. Anxiety and panic are also ruled by the still Player. 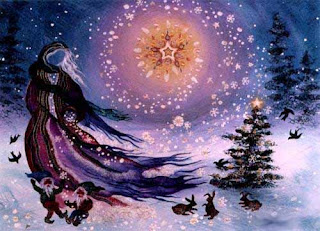 Well, now I've got to go fight off the cold/flu I've had for more than a week and start following this advice!  :-)
Posted by Cygnus at 7:38 AM 2 comments:

Email ThisBlogThis!Share to TwitterShare to FacebookShare to Pinterest
Labels: philosophy

I recently rediscovered a speech given by Bruce Sterling back in 1991.  It's official title, I think is "The Wonderful Power of Storytelling," but on the internet it's become known by it's most memorable axiom as "Follow Your Weird."  Let me just give a couple of quotes for flavor...


Don't become a well-rounded person. Well-rounded people are smooth and dull. Become a thoroughly spiky person. Grow spikes from every angle. Stick in their throats like a pufferfish. If you want to woo the muse of the odd, don't read Shakespeare. Read Webster's revenge plays. Don't read Homer and Aristotle. Read Herodotus where he's off talking about Egyptian women having public sex with goats. If you want to read about myth, don't read Joseph Campbell, read about convulsive religion, read about voodoo and the Millerites and the Munster Anabaptists. There are hundreds of years of extremities, there are vast legacies of mutants.

One of the things I love about the Old School RPG community is that this is the default, go-to mindset for so many of you awesomely nutty do-it-yourselfers.  Sure, many of us end up reinventing the wheel in some ways, but it's often part of the process of breaking down the assumptions and fundamentals of this pastime and building it all back up again.

I'm aiming to keep at it, too.  Work has been busy lately, but I've been trying to do just a little thinking and development on Homebrew '82 every day.  We'll see what the new year will bring!
Posted by Cygnus at 7:52 PM 6 comments:

Email ThisBlogThis!Share to TwitterShare to FacebookShare to Pinterest
Labels: philosophy

Cthulhu Time with Finn and Jake

Just putting the word out, hopefully without spoilers... I recommend that fans of both H. P. Lovecraft and the D&D-inspired cartoon Adventure Time should go watch the holiday special "Holly Jolly Secrets" immediately... 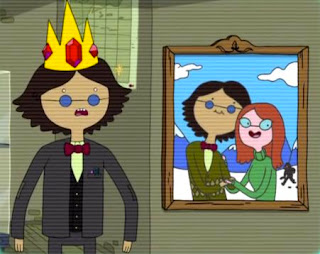 It certainly makes me think differently about the creepy giant penguins from At the Mountains of Madness!
Posted by Cygnus at 7:27 PM 3 comments:

The DIY Dungeon at last!

Way back in March, I blogged about getting started on creating a home-made version of TSR's old 1975 board game "Dungeon!"  (The exclamation point is part of the title.) I'm embarrassed that it took this long to finish the project, but it wasn't my top priority. Still, here it is... 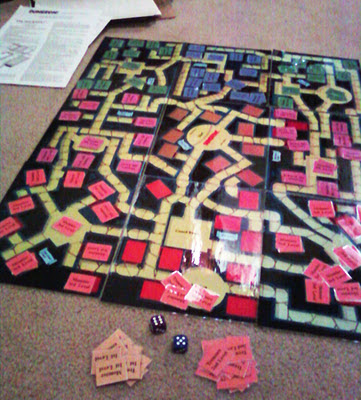 Boardgamegeek had half-decent scans of the original roll-up board, which I broke up into a 9-page (3x3) version, touched up via Powerpoint, printed, and laminated. I re-created the cards from scratch, using online spreadsheets that kindly laid out how many of each type one needs for a complete set. My cellphone camera didn't do a great job in capturing the cards, so here's a screen-capture of a selection of them (also done in Powerpoint): 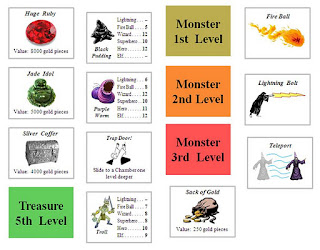 My son was 9 when I first blogged about it, and now he's 10.  We've played a few games so far, and he found it "really fun but frustrating." I think the frustrating part comes from having a game avatar that isn't so invincible as in most video games.... :-)

My wife asked me if this was Dungeons & Dragons, and I said "No, but it's the gateway drug!"

We also had a third player, but she was having trouble with rolling the dice... 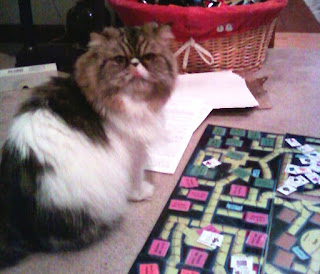