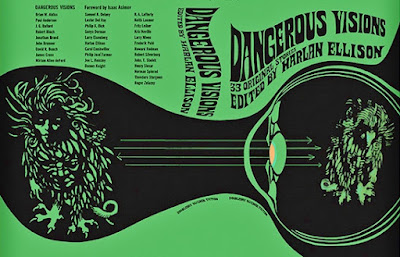 I think this might be the first time (for this collection) that, when finishing the story, my immediate thought was "I'm going to have to read more from this author."  Shame on me for being a fan of classic D&D and never having read Leiber before, but what can you do?

On the surface, this seemed like a classic American spooky tall tale, descended from Ichabod Crane through the genealogy of Ray Bradbury and Stephen King.  There wasn't very much sci-fi, so maybe you can think of this story as the slightly more red-blooded cousin of Rodman's "The Man Who Went to the Moon -- Twice."  Despite the (feigned?) simplicity of the first-person narrator's working-class point of view, Leiber's words are poetic and cadent and gleaming.  Just for the craft alone, I've gotta say WOW.

Initially, I was put off by the Twilight Zone trope of the creepy kid with the weird powers, but Hensley took the idea much further than I've ever seen it taken.  Hats off to that.  The author's vision of the not-too-distant future was hugely pessimistic.  A fair bet in the 1960s, I suppose, but I'll never be a fan of the anti-Panglossian vision of the "worst of all possible worlds."  Still, Hensley kept the tension running high throughout, and the ending did kind of leave you wanting more.  So, on balance, let's say OKAY.

Quite interesting.  I've read some Anderson before, and he always seemed quite adept at exploring the fuzzy boundaries between sci-fi, fantasy, and other thematic corners of speculative fiction.  This story was no exception, because it contained a combination of:

(a) The classic trope of dimension-hopping adventures between alternate Earths,

(b) Philosophical musings about how human society should be ordered,

(c) Just a pinch of taboo-busting, to give it the dangerousness required for this anthology.

Did it really need (c)?  I probably would have been more comfortable with the story if that aspect had been left out, but it didn't ruin the story for me, either.  I'm actually curious to find out if Anderson ever wrote any other stories set in this interesting multiverse.  But, for this one in particular, I think I won't go farther than OKAY.

Oh lord, I was actually rolling my eyes.  War Bad.  Yes, we get it. Maybe there's a smidge of something interesting here regarding the unintended consequences of transhumanism (i.e., uploading ourselves into robot bodies), but it's really just an unmitigated SKIP.

Editor Harlan Ellison really talked up Bunch's writing, to the point of giving him two back-to-back stories in this anthology.  This second one ended up being an abstract mood piece, without even a hint of sci-fi set dressing.  Maybe I should call it the outline of a thought of a seed of an abstract mood piece.  The words were engaging and surreal, but at just over 3 pages there wasn't nearly enough room to see how this seed might sprout into something truly interesting.  OKAY.

Sigh.  Not another Twilight Zone trope.  It had some interesting concepts, and some key details of its execution certainly appealed to the wannabe Greco-Roman classicist in me.  Definitely too heavy-handed on the condemnation of 20th century consumerism and status-seeking, but that's the 1960s.  I could probably write out exactly what Rod Serling would've said at the end.  OKAY.

Weird weird weird.  I can't quite tell if this story takes place in an alternate universe, or if it's our world and all the "dangerousness" was in the mind of the narrator.  The one main weakness of it, I suppose, is that I didn't truly understand what the author intended to convey until reading her Afterword.  Interesting concept, but mainly just OKAY.


19. "Shall the Dust Praise Thee?" by Damon Knight

Kind of a mix of the eye-rolling banality from stories #1 ("Evensong") and #15 ("Incident in Moderan").  Please just SKIP.


20. "If All Men Were Brothers, Would You Let One Marry Your Sister?" by Theodore Sturgeon

The stories that I rank "okay" are a mixed bag.  Some I like, and some I don't like. This one I liked.  The writing popped and entertained.  I'm not sure I've read any Sturgeon before, but I can see clearly that his craft was on par with the greats.  The story was probably included in this anthology because of some solidly Dangerous™ squick, but you can see in my reviews that this doesn't automatically repulse me.  No, my avoidance to give the highest grade, in this case, comes from a violation of that old standard: "show, don't tell."  It's a 39-page story, and the story itself was almost over (except for a big reveal) by page 29.  Unfortunately, the big reveal came in the form of a dry 10-page monologue, told by one character to another.  Isn't that Ayn Rand's territory?  So close, but alas merely OKAY.


21. "What Happened to Auguste Clarot?" by Larry Eisenberg

Is it true that the worst thing you can say about a joke is "I don't get it?"  This wasn't sci-fi in the least, and although it was a mildly inventive take on the hard-boiled detective story, it just went nowhere fast.  SKIP.

I'm impressed that such a short piece could be so stupid, so offensive, and so pointless all at the same time.  Please skip this one.  If you read it, you'll think very much less of this collection and all its participants.  Every story here probably contains some little thing that marks it as having been written in the 1960s, but there's dated, and there's dated.

(In the author's afterword, there was an interesting question raised about whether fiction ought to highlight our best angels or our worst.  The case for the latter being that rose-colored glasses can sometimes blind us to real problems in our midst.  It's the case for 1984 and other dystopias.  But every piece of fiction need not play this role!)

Ack... only one "WOW" this time around.  That makes only 3 out of 22 so far.  Will the remaining stories change that ratio?  Come on back to see...

Posted by Cygnus at 8:45 PM No comments: