My God, It's Full of Stars

I haven't written too much about my own personal religious or spiritual beliefs.  (Well, by implication, maybe just a little...)  I don't intend to start now, but I do want to talk about a small meditative "project" that I'm beginning today.

I've been long fascinated by astrology, but I should make it clear that I'm a pretty strong skeptic about its usual claims. I don't believe that the positions of the actual planets and stars in the sky have any kind of causal effect on someone's personality. But the psychological symbolism of astrology goes much deeper than the literalist claims of the horoscope-peddlers. Specifically, the 7 classical planets have been claimed to correspond to some pretty deep personality archetypes. (This book gives you a deep drink from this pool... this one looks interesting, but I haven't read it.)

Also, there's also some fascinating symbolism in the geometrical aspects that two or more planets can have with respect to one another. Two planets "in conjunction" are united in their operation... in "opposition" they work against one another. The range of harmonies and dissonances are similar to the musical/emotional ones that I discussed here. (So yes, this is relevant to the Glass Bead Game, too...)

So, what the best way to throw oneself into this interplay of archetypes, to learn more about them -- and maybe about myself? Well... there ARE those real planets up there in the sky, and they're slowly but surely cycling through all the possible combinations. Loath as I am to pay attention to them with an eye toward my own inner life, I've decided to give it a try. I've constructed a little push-pin orrery that I intend to update once a night before going to sleep: 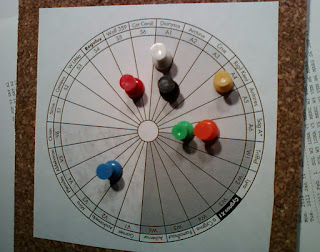 Other than move the pins around, I'm not 100% sure what I'll be meditating about. I'll definitely look for "interesting" aspects and think about what they may mean to me, but beyond that it's open-ended. Doing it before bed may also seed my subconscious with interesting fodder for dreams...

Being an inveterate tweaker, I put aside the 12 standard zodiac signs and instead mapped out a 24-fold sidereal division of the ecliptic. Accounting properly for precession, I've labeled each 15-degree chunk with my own favorite star or asterism. I've also labeled them by the seasons (e.g., V1 is the first house after the vernal equinox, W4 is the fourth after the winter solstice, and so on). I printed out a table of which of the 24 "houses" is occupied by each of the 7 classical planets for the next year or so, so I can update it every day in "real time."

Part of my reasoning for blogging about this is that I'd like to avoid slipping into superstition... i.e., I don't want to wake up one morning actually believing that the planets and their movements are literally doing stuff to me! Talking about it up front like this will (hopefully) help me stay grounded.

Anyway, I'll keep readers informed if any scathingly brilliant insights pop into my mind as a result of this practice!  :-)
Posted by Cygnus at 1:52 PM 1 comment:

Some people are upset that VH-1's declaration of today as "National Metal Day" could crowd out a proper observance of Veteran's Day. However, I think quite a few vets would be jazzed to see someone express their thanks by throwin' the horns and giving them a hearty "Rock on!" 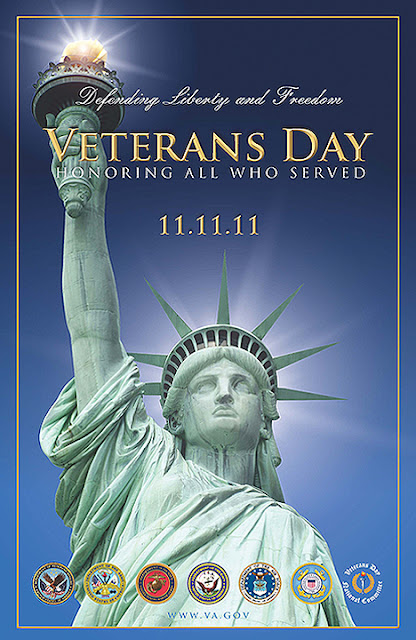