All righty then, back to the eternal Game.  (I won't keep linking the posts containing earlier moves, but at the end I'll put up a list of links to the whole thing somewhere up top... maybe I'll change the name of the "Free RPG Adventures" banner to something more like "Free Games 4 U" and categorize this as such.)  :-)

Today I'm picking up the pace and adding two new beads to the network.  They're both on the third row down (or the row right above the central golden thematic bead of Beethoven's Ninth): 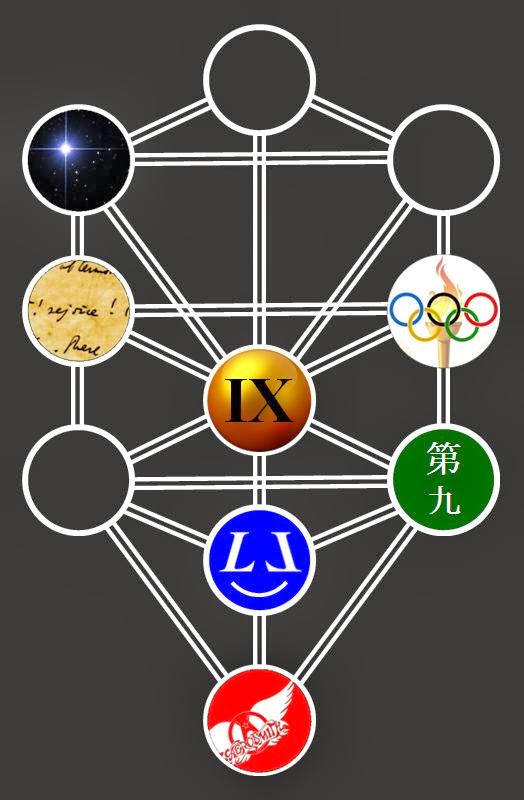 On the right, in the 2:00 position up from the middle, I'm taking the Armchair Squid's advice and placing The Olympic Spirit.  I've superposed the 5 rings, which were crafted by the Baron Pierre de Coubertin at the beginning of the modern Olympic era, with the divine eternal flame that links back to the ancient Greek Olympic games.  All this symbolism -- as well as the lofty ideals behind the symbols -- makes the Olympic games much more special to me.

(Despite being a life-long fan of the winter games, this time around I didn't get into the spirit too much... I ended up not really watching any of it on TV.  I was inspired by some of the stories, but I was both incredibly busy with the ramp-up to a stressful job interview last week, and also quite put off by ol' Pooty-Poot.)

On the left, in the 10:00 position from the middle, and directly below the Queen of the Night, I place a quote from my favorite quasi-religious piece of "channeled" automatic writing.  In Chapter 2, verse 44 of Aleister Crowley's Book of the Law, is the text:


"Aye! feast! rejoice! there is no dread hereafter. There is the dissolution, and eternal ecstasy in the kisses of Nu."

On the surface, this verse seems to be talking about moving beyond traditional religious ideas of the afterlife, and embracing a more pantheistic idea that when one dies, one is dissolved back into the web of atoms and molecules that moves on to create new life.

Specifically, I've centered the image of my bead on the word "rejoice!" in the original 1904 manuscript.  Why?  Well, if you obey the discarnate speaker (who may have been a spirit called "Aiwass," or a piece of Crowley's subconscious mind, or maybe a person hiding behind a curtain in his incense-filled hotel room in Cairo), you will have taken the 65 pages of the original manuscript for this book and arranged them into a grid...


"Paste the sheets from right to left and from top to bottom: then behold!"

If you do that and make a 13x5 grid, or a 5x13 grid, the exclamation point terminating the word "rejoice!" is right at the center of the whole thing.  Joy.  At the center.

You can now see how this links to Beethoven's Ninth Symphony.  :-)

Other links:  "rejoice" links up to the Queen of the Night, since the verse I quoted above talks about her directly.  "Nu," in Crowley's book, is in fact a name of the Queen of the Stars that personifies the infinite play of matter and energy in the universe.  It links to the Olympic spirit in the obvious sense of individual athletes rejoicing with victory in the games... and also the lesser (or comparable?) joy of just getting to compete at this elite "starry" level.

The Olympic spirit links to Beethoven's Ode to Joy for a similar reason as I outlined above, but also because the OtJ has been used more recently as an anthem of international cooperation -- a key goal of the modern games.  The link to the Japanese Daiku below recalls the globe-spanning choral performance at the opening of the 1988 Winter Games in Nagano, Japan, which Squid pointed out was quite sublime.
Posted by Cygnus at 4:17 PM 9 comments:

Remembrance of Toys Past

Maybe it's time for a break in the high-falutin' Glass Bead Game that I've been building.  It's been a while since I've done a fun picture post.  I've also been puttering around airports and hotels with free wi-fi for a few days now, so what's better to pass the time?  :-)

A few days ago, I was distracted by some unexpected search-engine hits that brought me back to the 1970s... the land of my childhood.  There are some games and toys from that period that everyone seems to remember, but there are some (that were special to me) that just don't seem to show up on the "I Love the Seventies" TV specials.  Here, they find a home. 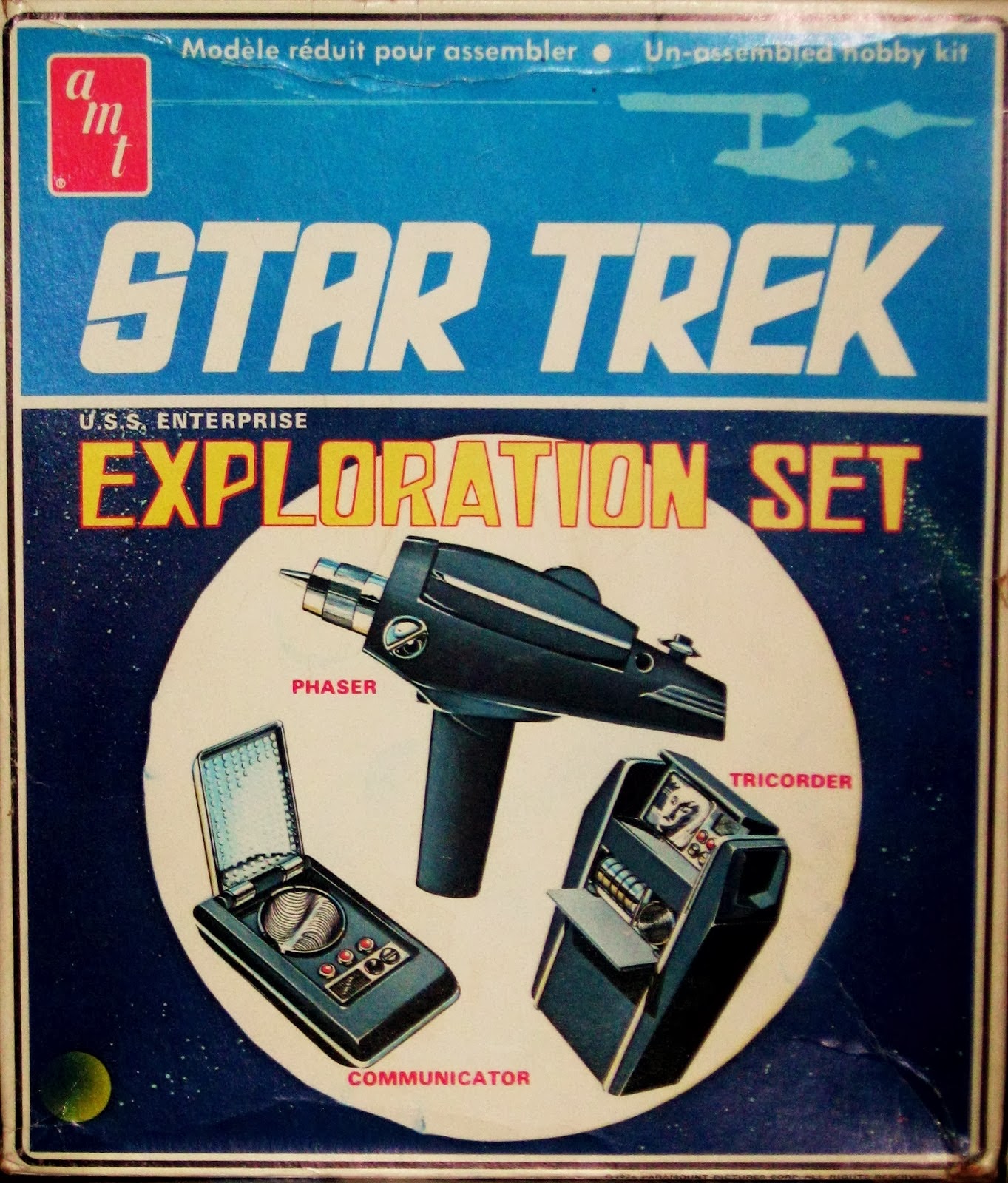 The above was standard issue for the nerdy kid growing up in the post-Watergate, Trek-rerun era.  I'm pretty sure the mini-sized phaser, tricorder, and communicator didn't come pre-assembled, and there was airplane glue involved.  (Contrary to the cliche, I thought that stuff smelled horrible... no apocryphal buzz could make up for it!) 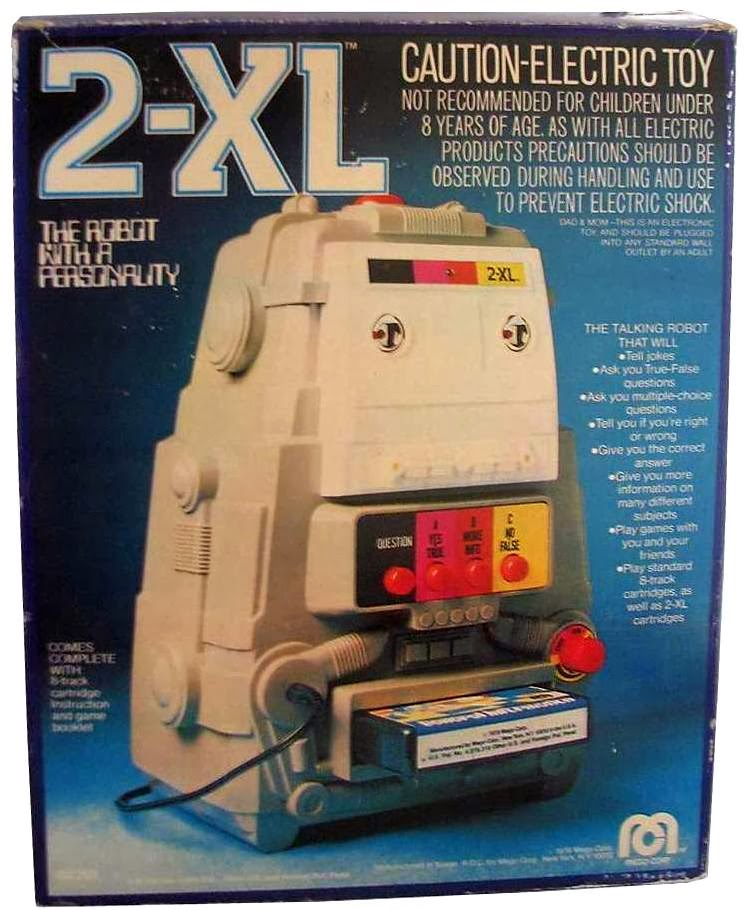 I'm sure you've heard of the 8-track tape machine, but did you know that some of them came with a snarky AI that insulted you if you answered one of its questions incorrectly?  2-XL was billed as a robot that quizzed you and was responsive to your answers.  Actually, there were 4 parallel audio tracks that you switched between by pressing the buttons.  I remember letting them all play through, on each track, just to hear all the funny quips.  Gotta get ones' money's worth, even if means slogging through lots of "Oh, you chose the wrong answer" responses! Another entry in the "ooh, it's robotic" craze of the late 70s, Big Trak actually let you program in a series of motions, turns, sounds, and light flashes.  The trick was getting it to go from one room to another, without bumping into walls, to pester other family members with its boops and pew-pew's. 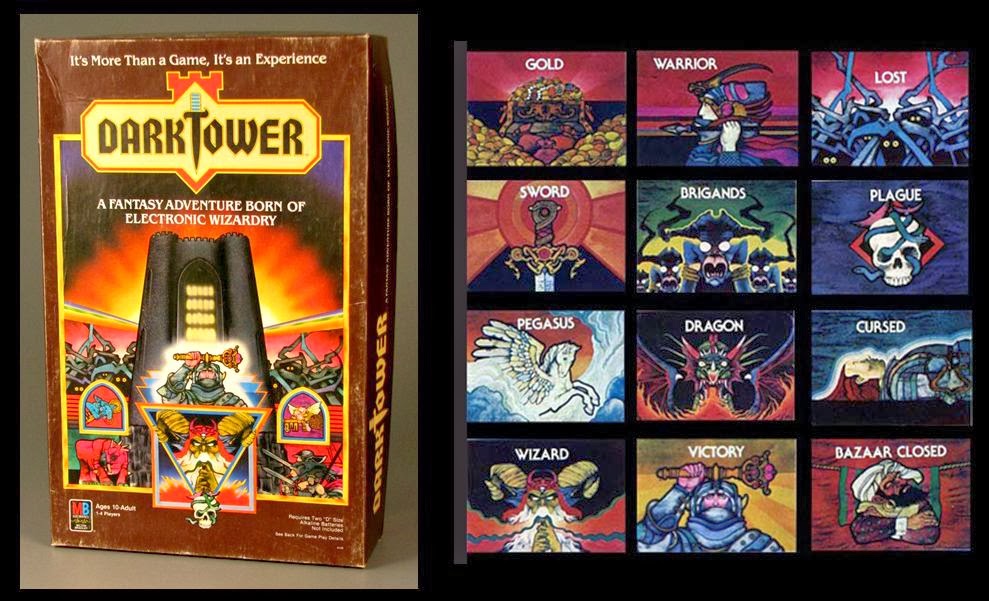 I didn't ever own the game Dark Tower, but many of my friends had it.  This was a surprisingly sophisticated combination of a board game and video (ish) game.  It's display was only red LED lights and a rotating screen with little painted images on it (see above), but it kept track of lots of things that made each game a very different experience.  Play it online if you dare!  Most people assume it piggy-backed off the popularity of D&D in the late 1970s, but I think it owes a much more specific thematic debt to Ray Harryhausen's movie epics -- Sinbad, Jason & the Argonauts, and so on.  It's just got that feel. 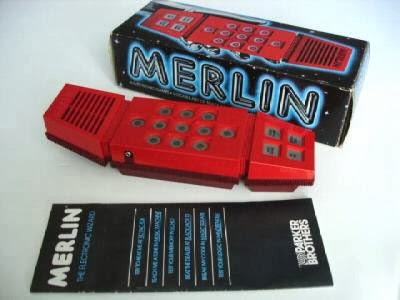 Well, here's one that lots of people probably remember.  Merlin was a handheld computery device that let you play games, test your memory, and create short programs of musical notes.  (A few posts ago, I mentioned that its list of suggested tunes included my first exposure to Beethoven's Ninth Symphony!) 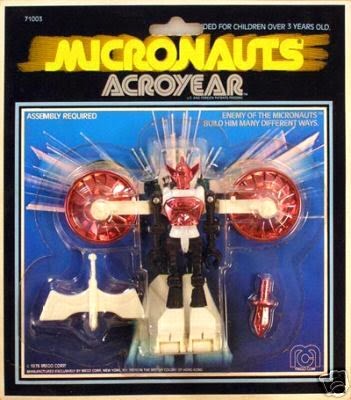 Micronauts was a franchise in search of a story.  At the time, though, we didn't care about who they were or what their motivations were, we just thought their translucent robotic parts and spaceships were super cool.  Marvel Comics later created a story around them -- they were put into a tiny subatomic world that (somehow) sometimes interacted with our own -- but it was nowhere near as awesome as what we dreamed up. 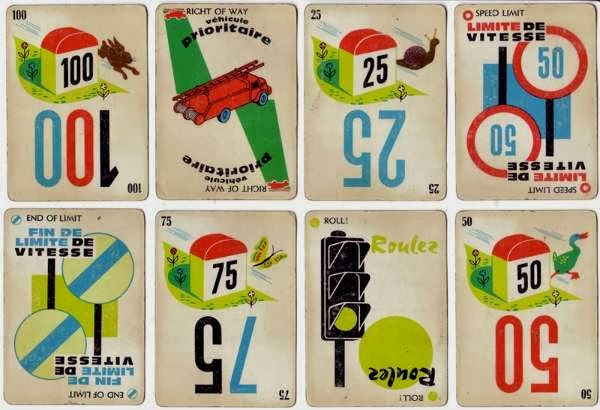 I'm not sure if the French card game Mille Bornes was a 70s fad or not, but cards of the above trippy vintage happened to be around when I was a kid, and I was fascinated by their colorful iconography.  I don't think I ever played the game as it was supposed to be played.

I remember almost nothing about the rules of Pokeno, but I remember playing it -- along with Yahtzee and, of all things, the Mad Magazine Game -- with my Mary Poppins-esque grandmother back in the day. 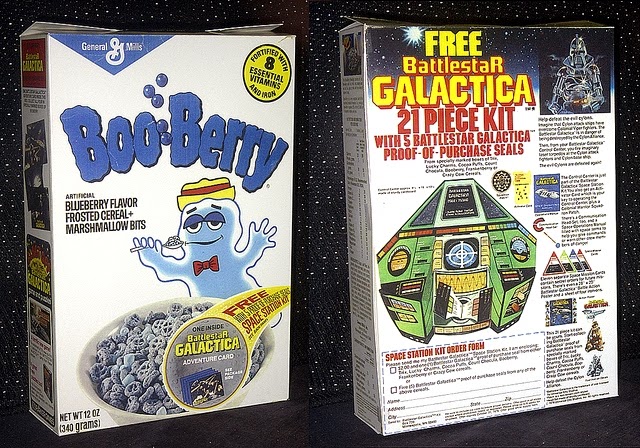 Oh, Battlestar Galactica.  Yes, I know you were a cheesy rip-off of Star Wars, dressed up in creator Glen Larson's murky view of some strange Mormon traditions, and marketed to kids my age until the proverbial cows came home.  But you were mine.  Especially after sending away for, and receiving, this cardboard Colonial Viper cockpit simulator.  That silly thing was truly the gateway to the stars for me.  A few years ago, I found it, mildewy and decaying, in my parents' basement.  In the state it was in, it was right to throw it away, but I did my best to photo-document the heck out of it before that... 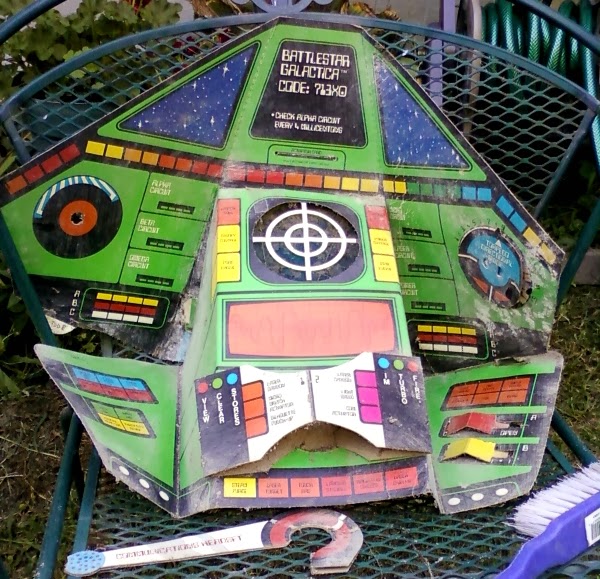 Is it silly to be focused on nostalgia like this?  In moderation, I don't think so.  The D&D blogosphere deals a lot with the products and experiences of the past, but I think they tend to keep one foot looking forward, too.  Anyway, I hope this little trip down memory lane was fun for you!
Posted by Cygnus at 7:11 AM 5 comments:

The Ode to Joy Game: Half Time

So, okay... five down, five to go.  The Glass Bead Game (here are moves 1-3; here's move 4) plays on.  I was thinking about slowly working my way up the tree, but I decided it might be more fun to stake out new territory, and then fret later about how I've painted myself into a corner...  :-)

I christen the upper-left bead with the symbol of The Queen of the Night.  I've never watched Mozart's opera The Magic Flute from start to finish, but I've always been fascinated by the mythic plot, the garish Egyptoid costumes, and the music.  The Queen of the Night, who has no other name in the opera, is the big bad villain of the story, though that's not known at the beginning. 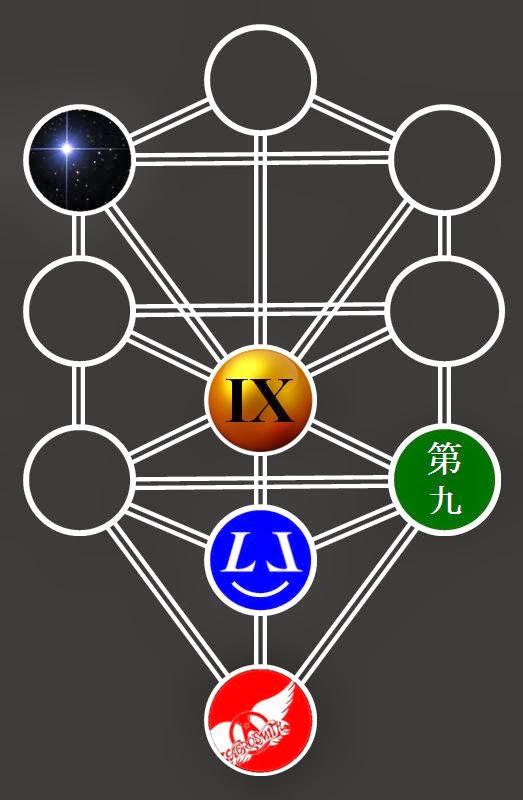 (Actually, I told one lie above.  In some versions of the libretto, the Queen is referred to as "Astrifiammante," which is (ear-poppingly beautiful) Italian for "star-blazing.")

The opera is almost a protean version of the Princess Bride.  There's the triumph of true love, the redemption of pirates and vagabonds, and -- on the way -- plenty of trials, tribulations, and torture.  The Queen is portrayed as irredeemably nasty as Chris Sarandon's Prince Humperdinck, and she gets what's coming to her in the end.

But... but... I wonder if she gets a bit of a bum rap.  Mozart put in some pretty stark symbolism about the dark night of pre-rational superstition being beaten by the rising sun of Enlightenment-era wisdom.  Okay, yes, the Enlightenment was largely a good thing.  But the day needs the night.  Dreams may be pre-rational and chaotic, but without them (some neuroscientists claim) our mental performance would decline quite rapidly.

And then there are the others with similar names.  You might know that the Virgin Mary is sometimes given the title of Queen of Heaven, but did you know that one of the chief goddesses of Tolkien's Middle Earth was Varda, the Queen of the Stars?  I also must mention Nuit, the divine personification of Infinite Space in Aleister Crowley's modern religious tradition of Thelema. 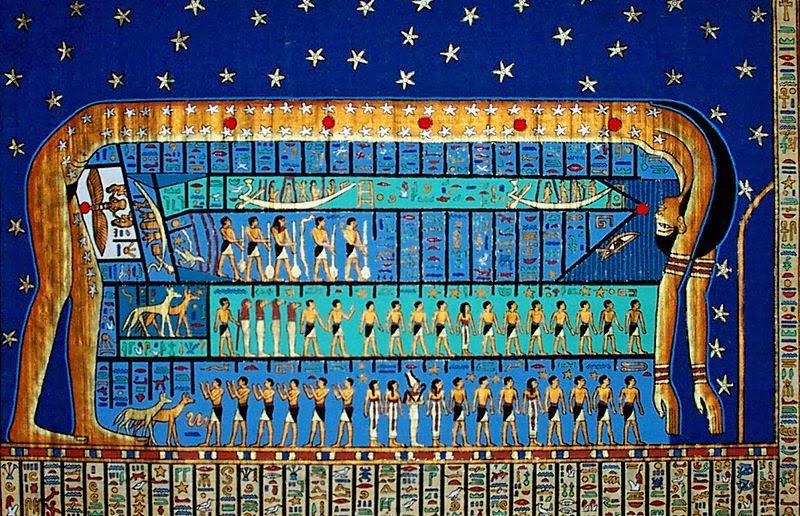 Links:  There's only one bead that connects to this one right now, and it's Beethoven's 9th Symphony in the central spot.  Aside of the fact that both of these refer to famous and masterful works of classical music, there are also resonances in Schiller's famous poem.  Even though it often name-checks the Christian God, one can't deny that it also comes close to deifying "Joy" as a goddess-like Daughter of Elysium.  She entrances us with her magic, she causes the flowers to bud, she hurls stars around the sky... sound familiar?

("Joy, joy drives the wheels
In the great clock of worlds.
She lures flowers from the buds,
Suns out of the firmament,
She rolls spheres in the spaces
That the seer's telescope does not know.")