I didn't want to bury the answer to the last post's quiz question in comments, so here's a quick post for closure.

Although the symbols I showed do look very astrological or alchemical, I'm pretty sure they're supposed to be American cowboy "brands" for cattle and horses.  They were displayed on the walls of the fictional Mel's Diner on the 1970s TV show Alice.  I don't think the characters ever actually talked about these decorations, but they were an omnipresent mini-mystery to me as a viewer. 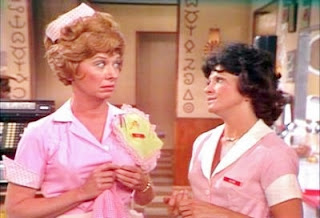 Meaningless?  Maybe... maybe not.  I've always meant to learn more about the elaborate symbol system of cattle brands, and their ancillary use as the names of ranches and estates.  Most of the ones I've found online seem to be letters of the alphabet that have been morphed or transformed in some way.  That makes the ones from the TV show kind of odd.  The Wikipedia article on the show says the diner was decorated in an "Aztec and cowboy motif," but these symbols don't really look Meso-American, either.  I guess Occam's Razor points to some anonymous Hollywood set-painter who just had a vague idea of what diner decorations in Phoenix, Arizona might look like!  :-)

Anyway, that's all for now.  I've been plugging away at the sooper-secret project hinted at in the last post, but things aren't quite ready to be revealed.  Soon!

First, Cygnus has got something kind of big up his sleeve.  A new project will be revealed very soon.  (Well, maybe in a week or two; we'll see.)  I'm not quite ready to spill the beans about it, but let me give you all one hint:


Second, I'm curious if any of your memories might be jogged by a little trivia obscura. Long-time readers will know that I'm obsessed with signs, symbols, and alphabets of all kinds.  There is one set of symbols that I've had in the back of my mind for almost 40 years now.  They made their first appearance in popular culture in the 1970s.  Thanks to the internet, I've finally been able to reconstruct the full set accurately:

Your mission, should you choose to accept it, is to tell me where these symbols come from.  (I won't ask you what they mean, because I'm not quite sure about that, myself!)