Here's a roundup of random items that have been gathering at the back of my brain...

You've all heard about the upcoming resignation of Pope Benedict XVI, but how many of you knew about the centuries-old Prophecy of St. Malachy, which has been claimed to predict salient features of each new pope since its publication in the 16th century?  Back in the 1950s, an American cardinal even hired a boat, loaded a couple of sheep on board, and sailed up and down the Tiber River to advertise his readiness to be the predicted "Shepherd and Sailor."  (They didn't pick him.)

Eerily, the pope about to be chosen is the final one in the list: "In extreme persecution, the seat of the Holy Roman Church will be occupied by Peter the Roman, who will feed the sheep through many tribulations, at the term of which the city of seven hills will be destroyed, and the Formidable Judge will judge his people. Finis."

So then, it's definitely time for Pope Sarducci...

When I first happened upon this web page full of links to Unusual, Neglected, and/or Lost Literature, I didn't poke my head up for hours.  What wonders are contained therein!  And how, please tell me, have I lived fortysomething years with nobody managing to tell me about Richard Burton's glistening Kasidah of Haji Abdu El-Yezdi?

Along with many D&D fans, I've recently taken the chance to read for the first time the fabled B/X rule books from 1981 by Moldvay and Cook.  I was a Holmes '77 man myself, so those red and blue boxes never held any appeal back in the day.  But seeing them now, I'm definitely impressed with everything they accomplish in their brevity and simplicity.  I also appreciated the chance to get to know Sister Rebecca a little better.  Still, if you want novelty, gonzo creativity, and the epitome of the Old School adventuring aesthetic, I'd have to say that Gary's 1st edition AD&D -- the three original books -- blows them all out of the water.

I'm probably the only one who's always assumed this song was written and sung by Carole King.  If you click on that link and see what song I'm talking about, you'll roll your eyes at my silliness.  In my defense, I can only exhort you to close your eyes and give it another listen with Ms. Tapestry in mind.  The other day, I looked down at my satellite radio thingy and I saw a name of the opposite gender.  I'm so sorry, Mr. Rundgren!  Yes, I know what happens when you assume.

Stuff you don't know about Cygnus, Part XIV:  I once won a T-shirt at a bar for knowing that the three actresses who played Catwoman were Julie Newmar, Eartha Kitt, and Lee Meriweather.  (Yes, that was all of them up to that point. Anne Hathaway was 7 at the time.)
Posted by Cygnus at 7:58 PM 15 comments:

We're back with more literary false starts, this time on le day le amour.  Please visit the others to maximize the love!  I've promised to break open my cursed necronomicon of verses.  Let the snickers commence. 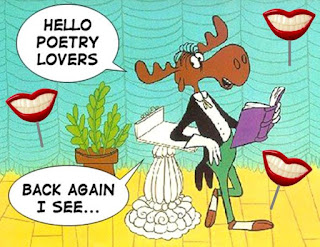 In the earliest ones, from roughly 1985 to 1987, I stuck with common meter (fun fact: you can sing any Emily Dickinson poem to the tune of the Yellow Rose of Texas).  Topics ranged from the D&D-ish...


The magic that has gone away
Persuades us all to yearn
For that fine ecstatic day
The dragons will return.


Just leave me with my books and friends
And happy I will be.
For why live life as someone else,
When I can just be me?

The romantic stuff?  Gotta wait for it.  You first have to suffer through my discovery of T. S. Eliot and the modernists, when I started to incorporate automatic writing and hypnagogic words.  Here's "Sothis" in its entirety from 1991...


Fine fires of the nightly brigade,
Your eternal afterness rhythm circuits the sky.
Envision an ancient fear, human nation;
The rupture of seasonal scales, a ruddy
morning opal.
Drench to the western; rage to the decans!
Our guest, oblivionbound, evaporates
the hollow hypothesis.
Free as heartburn under an aesthetic sun.

What, you can't tell it's about a big controversy in the field of archaeo-astronomy?  :-)

My "masterpiece" from that time was a seven-part epic called Grand Unification.  It followed the form of the 7 chakras and tried to be an emanationist creation myth.  It was also quite terrible.

No, really.  Cringe-inducingly bad.  Trust me.  I don't think my problem was a lack of good ideas, but more an invincible unwillingness to edit my first drafts.  Once it was down on paper, it was sacred.  Add to that a surplus of name-drops from every bit of literature and mythology I had ever soaked up, and you get a very hot mess.  In looking it over again after many years, I see that, for some reason, the cringes come least when I'm asking questions... from this paean to a vacant creator god...

Our ignorance still plays on open ground
When we gaze into your infinitude.
Were you a nothingness bereft of soul?
Or was there magic in your solitude?

to this bit of musing on the third eye and exile...


Who fights for the night in spite of first light?
And blinded by brightness sets out to unite?

Who fashions with passion and full of grim ration
The thirtytwo musical names of compassion?

Who looks out on a cosmos distressed to destroy?
Driven mad by diversity only sees joy?

Who prays to a misanthrope harlequin ghost
In twilight agape before all nature's host?

Certainly not as terrible as the other parts -- at least here weren't any ham-fisted allusions to James Joyce, Joseph Campbell, and Conan the Barbarian -- but still in need of a lot of work if I were to ever want to do anything with it.

Thereabouts 1990 or so came the Serious Relationship that launched a thousand doggerel-filled ships.  It took me a while to figure out which piece of lovey dovey-ness to post.  I boiled it down to a choice between two extremes: one optimistic (all beginnings and rainbows) and one pessimistic (all moody and obsessive).  The choice fell on the fact that all of my forays into sunshine and lollipops were just plain trite and BAD. Oh, the darker one is also bad, too, but maybe the depth of genuine, albeit raw, feeling pulls it through.

Don't worry, though.  There is happiness at the end of this post.

Let me also preface it by making it clear that names have been changed to protect the not so innocent.  Okay, now I'll give you what you came here for.  This is "Liebestod."

I still don't sleep Justine.
I thought it was over Justine.
But in a dream Justine.
Your face was before me Justine.

I walk through the crowds Justine.
I listen to the people who know the answers Justine.
I drink and I joke Justine.
I read my books Justine.
And your face is before me Justine.

I want to remember Justine.
I want to forget Justine.

And all that I am Justine,
Although I know better Justine,
Still needs you
Justine.

Yee-ikes.  In a recent TV show, the characters were musing about obsession in love, and how there's just a thin, thin line between a "Dobler" and a "Dahmer."  I think that just writing the above was enough to get the obsession out of my system... And also, just a month or two after all that unpleasantness, I met the woman to whom I've now been happily married for 21 years.  There's been lots of poetry there, too, but I'm not posting that.  :-)

A Blendsday at the Races

It's been a while since I've done one of these...

You know what can turn a good day crappy for me?  I hear "We will Rock You" on the radio, and they DON'T play "We Are The Champions" immediately afterwards, like God and Freddie intended.  What's the world coming to?
Posted by Cygnus at 8:03 PM 10 comments: