Why do I do the things I do?

You won't find the answer to that question here, just one of the things.  :-)

Last week, I was sad to hear of the passing of Gene Cernan, the last astronaut to set foot on the Moon.  That got me thinking that I've always wanted to have the names of the Apollo astronauts memorized.  Growing up, they were always quite important to me, but I think I could have only rattled off the crews of Apollo 1 (whose fatal fire just had its 50th anniversary yesterday), 11 (duh), 13 (because of the movie), and then just Cernan from 17 (for his special final status).

Again, I don't know why I would want to memorize them all, but I've done similar things in the past.  I once could recite the names of the first two centuries worth of Roman emperors in order, and also the names of the 20 divisions of the Mayan tzolkin calendar.  Maybe a few other lists that I've, um, now forgotten about, too.  :-)  It's not like I ever made a public show of that knowledge... it's just that I liked knowing it.

Anyway, I still don't know if I'll try to cram these astronaut names into my memory, but I did have fun creating a one-page "cheat sheet."  If I go ahead and try to memorize, I'll stick this in my pocket and refer to it as I study.  I looked around for something similar, but all the other infographics were either too busy (i.e., wouldn't look nice printed on paper) or didn't contain what I wanted.  I jazzed it up a bit with the mission patches and the informal call-signs for the ships, and I thought I'd share it here: 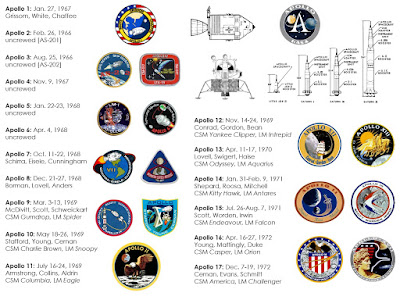 Clicking on the above gives you a medium-resolution JPG image.  I've also put a nicer PDF version at this Google Drive link.

Hey, if I can't use this blog to share the fruits of my weirdness, what good is it?