The Songs of Autumn?

A few months ago, some of us hosted a blog-hop called The Songs of Summer, in which we waxed nostalgic about a handful of favorite hot-weather songs.  I originally thought of this as a way to share virtual "mix-tapes," but we ended up not using that particular phrase because it may have excluded bloggers too young to know about that particular piece of DIY-cassette history.

But, last weekend, as we've been starting to pack up our belongings for a big cross-country move, lookie what I found... 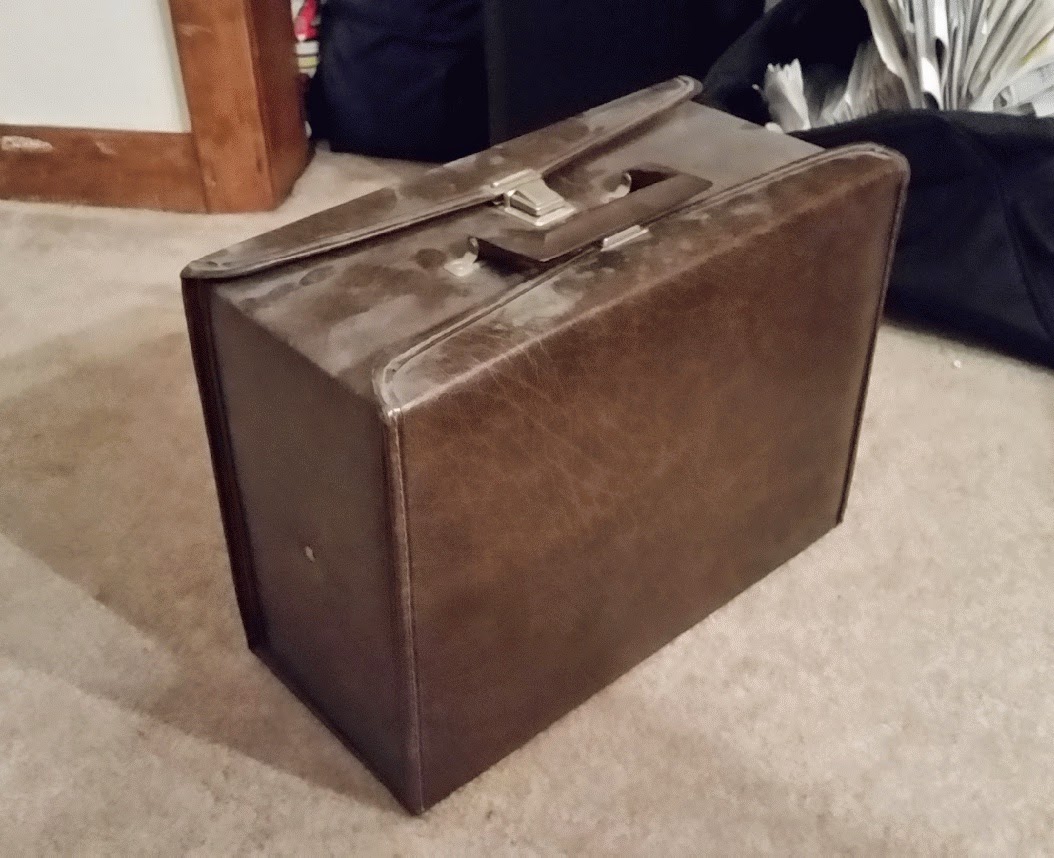 What could be in that dusty feaux-leather case?  What do you know... a combination of store-bought cassettes and mixy mixes.  (You can spot those from their dot-matrix-printed labels.)

I hope my phone did a decent enough job in rendering these crackled gems.  The above was side one of the case; here's side two: 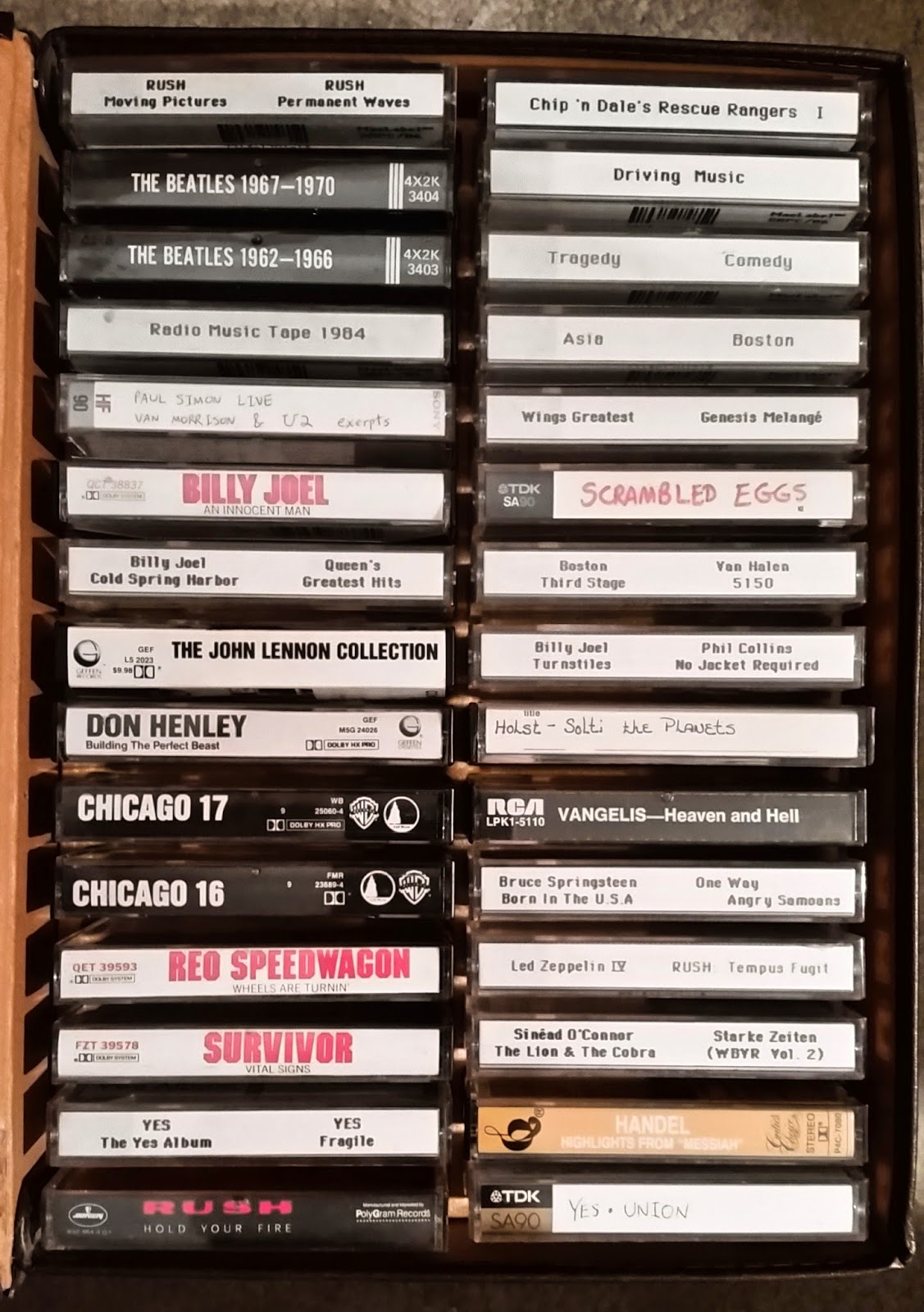 Too many memories to list them all here.  When I was first getting into Canadian prog-gods Rush, I made the era-spanning tape called "Tempus Fugit," but later it got mothballed as I eventually bought every one of their albums (on CD... but that's a later geologic era).

There are a few that I'm a little afraid to listen to.  The hand-scrawled tape titled "Scrambled Eggs" contains an impromptu collection of sound effects, clips, and recordings of myself & friends doing strange things in a college dorm room.  Were we actually funny?  Like I said, afraid to know for sure.  There's also a mix-tape of love songs from an ex ("A Shade of Music"), but don't flip it over to hear what I assembled after the breakup ("Heart of Darkness").  :-)

I tried to give my artistic side some room to play in making the tape covers.  It's amazing the things you can do with Steve Jobs' original 128K brick... 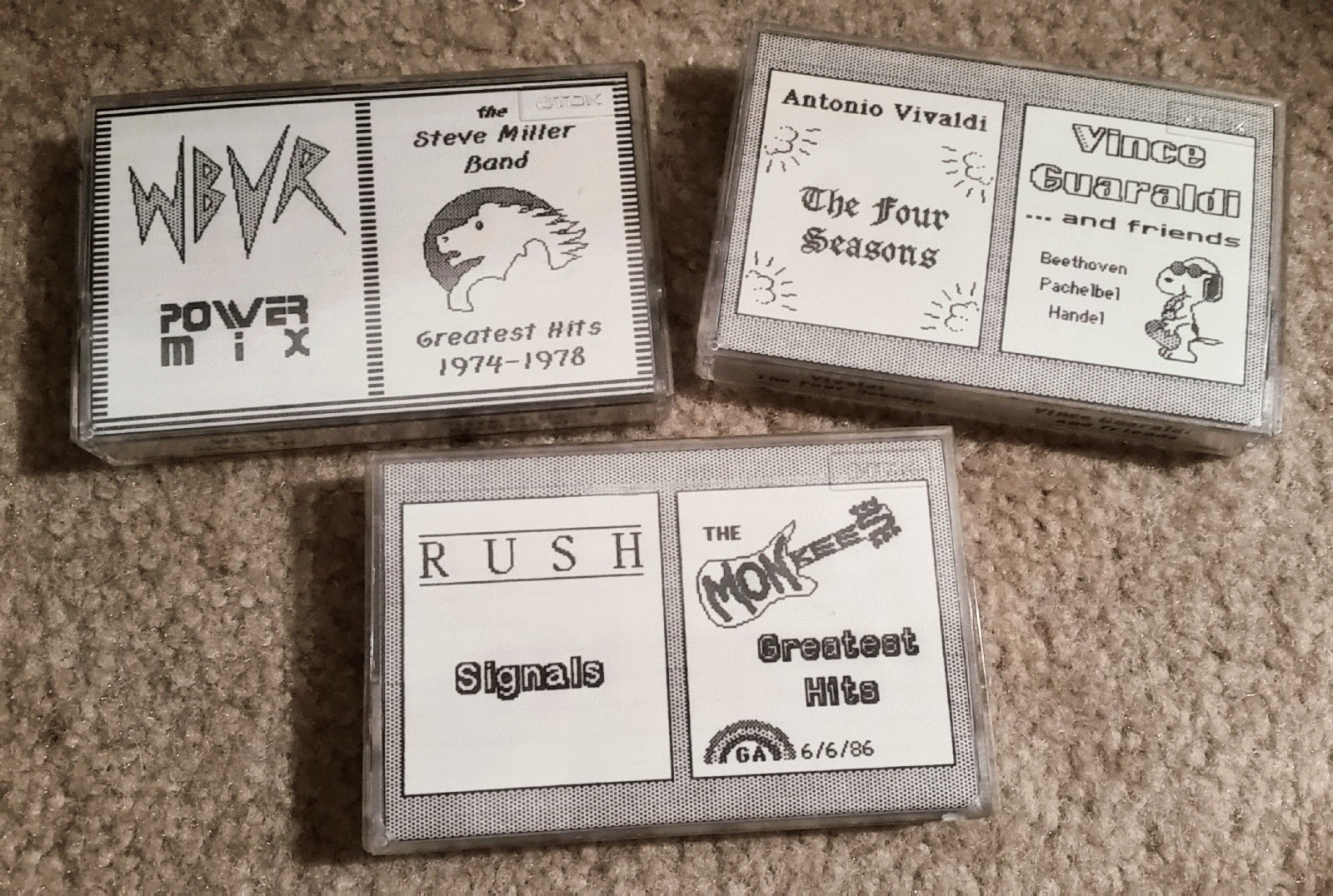 WBVR was the unofficial name of the collection of music and stereo equipment of a set of 4 engineering & physics students (well, I was the only physicist).  The name comes from the Beave, whom I've mentioned before.  His 45's were the core of the collection.

If you look closely at the Monkees' Greatest Hits (cobbled together from whatever we had... no relation to an actual greatest hits album), you'll see the rainbow logo of Six Flags Great Adventure, which the four of us visited on the emblazoned date to see the Monkees play, along with Herman's Hermits, the Grass Roots, and some other 60s wonders.

I thought I'd give you a look at one song list, this from the tape labeled "Carpe Diem."  (Gosh, I wonder what movie we'd just seen when I came up with that name?)  I always popped this one into the walkman when I needed a bit of an optimistic lift... 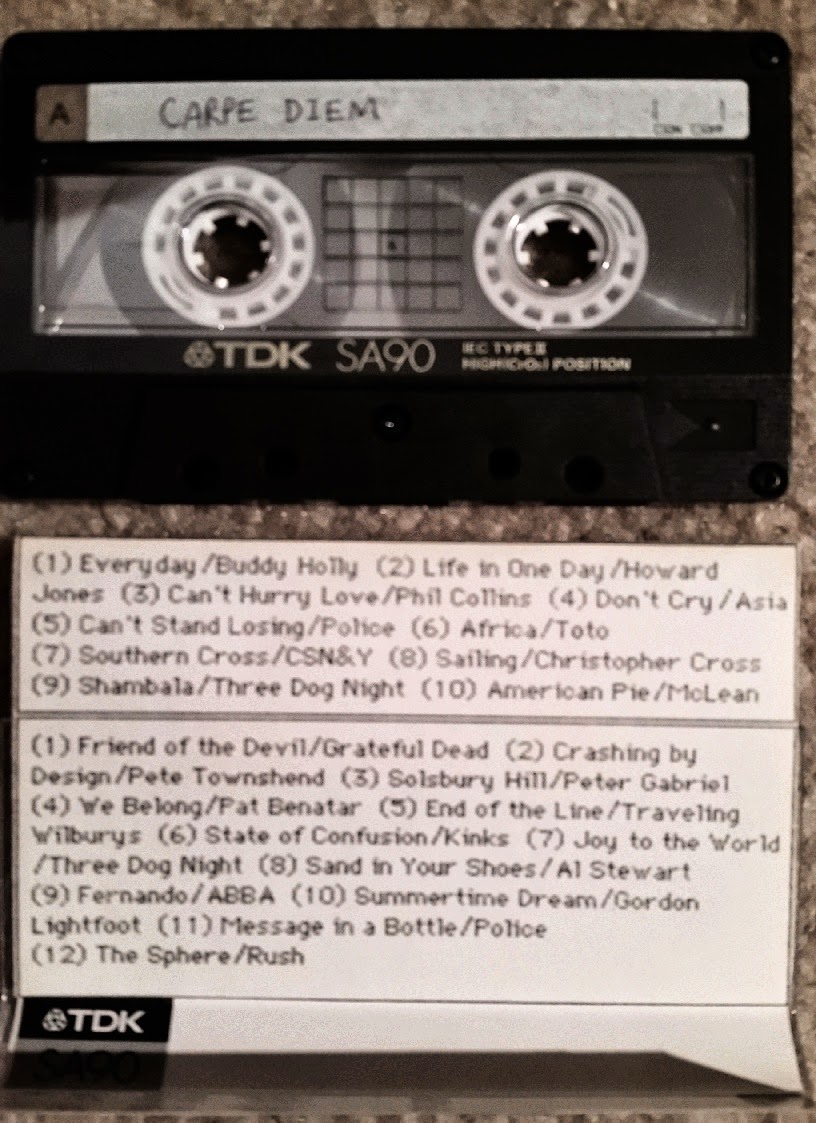 ...though I can't for the life of me remember why I thought of "American Pie" as an appropriate inclusion for an optimistic, seize-the-day-ish mix tape.  :-)

A few months ago, the indomitable Suze posted a review of a well-enjoyed movie about which the critics were less than glowing.  It spurred in my mind the idea to take this on as a theme.  Naturally, there have been plenty of times when the erudite balcony-sitters have been out of step with popular opinion, but what happens when both the critics and the public are arm-in-arm in agreement against an army of one:  me?!

(I also admit to almost forgetting about this idea until the site io9.com posted something similar a week or so ago... a virtual confessional for admitting unpopular geek likes & dislikes.  So, thanks io9!)

I've got a set of micro-reviews of 6 films that hold a special place for me, but maybe not for many others:  3 movies that everyone seems to love to hate... 1 television mini-series that's thought to be a crap sandwich compared to the novel that inspired it... and 2 well-regarded movies that are often lost in the shadows of even more popular & acclaimed "siblings." 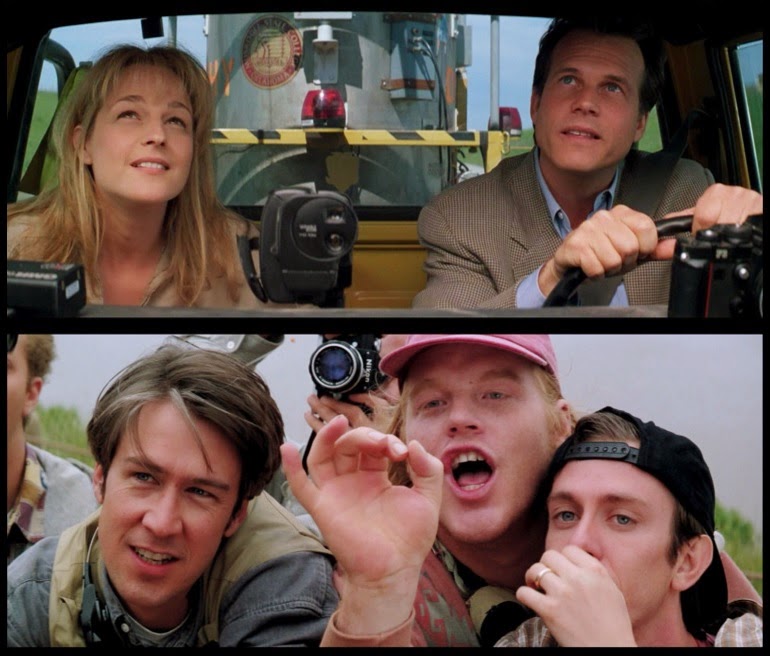 First, there's the 1996 blockbuster Twister.  Yes, it's a cliche-filled summer action movie... but it also features the red-blooded pursuit of scientific data.  Having been released the year I defended my PhD, it definitely holds a special place in my heart.  The film made lots of money during its release, but its embrace of crazy spectacle often leads people nowadays to treat it like a bit of a punching bag.  That's too bad, I say.  The lead actors (Carol the Waitress and Private Hudson) did an okay job, but the real soul of the movie was the motley crew of sidekick researchers, including Cameron from Ferris Bueller and the late Philip Seymour Hoffman.  I'll make a detour for Aunt Meg's steak and eggs any day.

Hawk the Slayer was a low-budget fantasy movie from 1980 that capitalized on the rise in popularity of Dungeons & Dragons.  Most peoples' memories of the film tend to focus on either Jack Palance's egregious scene chewing, or on the Tolkien-esque adventuring party: a Spock-like elf, a wise-cracking dwarf, a bald giant (well, "slightly taller than average dude")... i.e., pretty much the randomly rolled PCs one would get from 3d6 in order.  I haven't seen this movie in probably 20 years, but I can't imagine that re-watching would change my nostalgic "so bad it's good" opinion.  Lots of others just delete the "it's good" part.  :-) 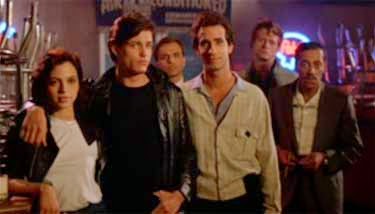 Eddie and the Cruisers (1983) seemed to want to be a bunch of things at once.  Is it a decade-spanning murder mystery?  A tragic story of regret and lost love? A meditation on how intense creativity (replete with shout-outs to Rimbaud) is corrupted by success?  Or was it just a vehicle for an up-and-coming band who got to do an entire soundtrack?  The critics seemed to think "none of the above," but this one always pulls me into its gravitational pull when I come across it. 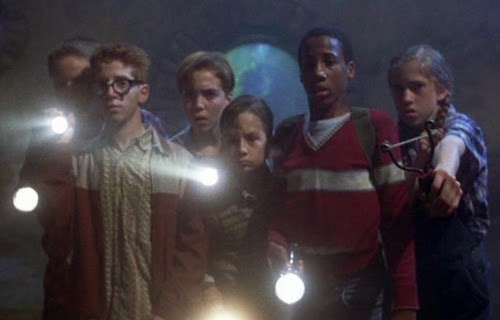 I first encountered Stephen King's "It" when its miniseries version aired in 1990.  I went on to read the 1000+ page novel it was based on, and was kind of put off by the latter.  The author is a master, of course, but I actually liked how many plot elements were streamlined to make a workable film.  (The less said about the book's "ritual of Chud" the better.)  I also really liked many of the performances... especially John Ritter and Annette O'Toole as Ben and Beverly, and of course Tim Curry in a career-cementing role as Pennywise.  But despite the all-star cast, I have a feeling the critics and King fans overwhelmingly prefer the book.

Hmm, I notice that one common element in all four above movies is that the protagonists are all parts of a diverse and fun-loving "rag-tag team."  Maybe all of them -- not just Hawk the Slayer -- would make for good tabletop RPG adventures!

Next, the two well-regarded movies that I'm in the minority for thinking that they outshine the other more famous output of their cinematic auteurs... 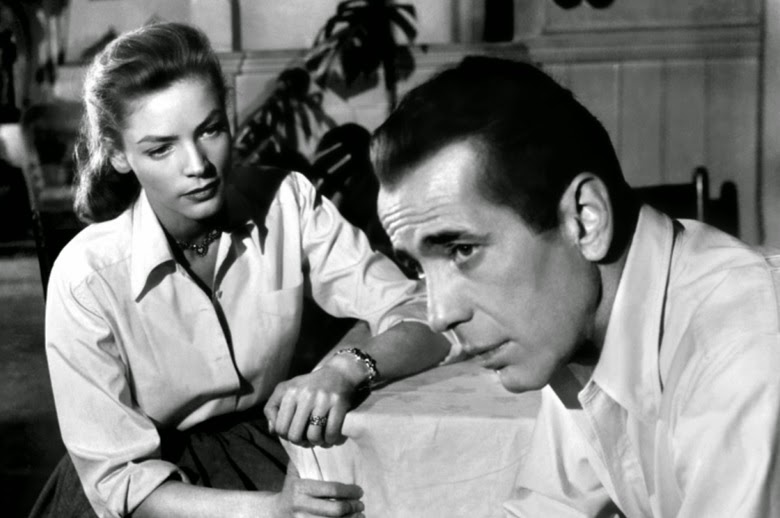 Bogey and Bacall were legendary (as were Bogey and Bergman).  But you can keep your Casablancas, your Big Sleeps and Have Nots.  I've seen them all, but I've got to maintain that the real gem is 1948's Key Largo.  It's just so much psychologically deeper and more interesting than those others.  Maybe it's that this one had an engaging bad guy (Edward G. Robinson's infinitely quotable Johnny Rocco) that was a worthy opponent to Bogart's stoic war vet Frank McCloud.  The romance angle with Lauren Bacall was a bit secondary to the plot, but it was still quite sweet. 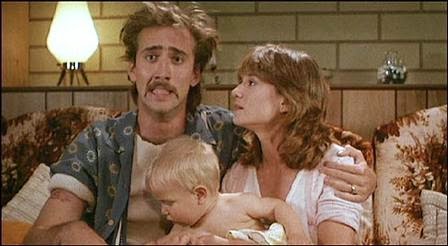 The Coen brothers are known best these days for a series of Oscar-nominated classics.  Everyone loves Fargo, The Big Lebowski, O Brother Where Art Thou, No Country for Old Men, and so on.  But pride of place, to me, goes to 1987's Raising Arizona.  It soars, this movie; it soars.  It's got tons of clever lines, twisted humor even in the set design and lighting, and Nicolas Cage's most out of control hair.  It's also got acres of heart, combined with a slightly ambiguous ending that calls back to the Molly Bloom soliloquy at the end of Joyce's Ulysses.  Okay, then.

FYI, I originally wrote a bit more to list a few opposite cases to the above: movies around which everyone seems to link arms and sing Kumbaya, but I can't stand.  But I deleted that noise... the world doesn't need more negativity.  Just go treat yourself to one of the 6 imperfectly perfect gems listed up above, and I'll be happy.
Posted by Cygnus at 8:04 PM 7 comments:

Email ThisBlogThis!Share to TwitterShare to FacebookShare to Pinterest
Labels: review

Holy crap, has it been more than a month since my last post?  If I searched, I could probably find myself saying "life has been crazy" about a dozen times over the life of this blog... but this hiatus has been living proof.

Hmm, where to pick up the golden thread?  In the last post, I teased about something Star Trek themed that I found at a New Jersey flea market.  They were 'zines! 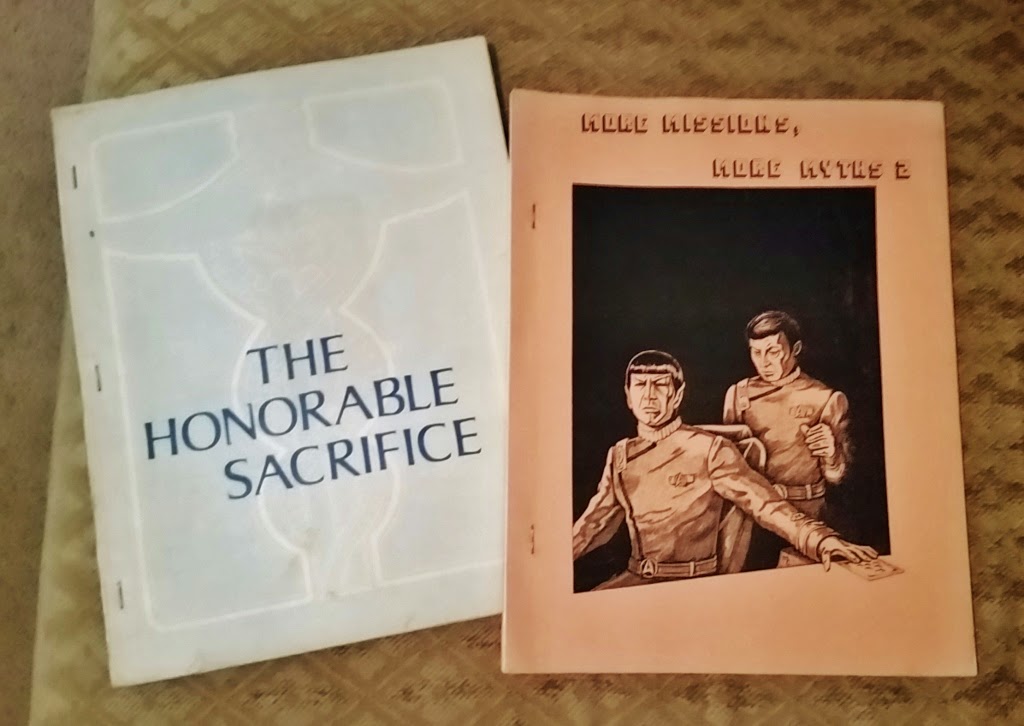 I have a soft spot for these typewritten, photostatted, fan-produced gems. They were the forerunner to today's fan fiction forums, and they highlighted the true love that fans can muster for their favorite imagined worlds.  The two zines that I found were from the "movie era" -- specifically, the 2nd issue of More Missions, More Myths (1985) and the stand-alone story The Honorable Sacrifice (1981).  They're probably not in any way valuable or collectible... but this was the first time I've seen any Star Trek fanzine "out in the wild."  For $2.50 a pop, how could I go wrong?  :-)

I regret to say that I still haven't been able to start reading these stories, but I'll post if I have insights.  On first glance, I wasn't surprised to see Spock as the primary focus of most stories, but McCoy was much more a major player, throughout, than I thought he'd be.

Just about any "other news" I can think of to report seems to revolve around the Doctor... 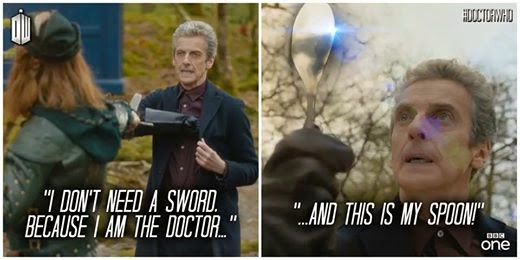 Anyway, I hope to be able to post a bit more frequently as the fall goes on.  Allons-y!