If I ever get back into running a tabletop RPG, it would probably be my own evolving Homebrew '82 system, with players most probably being friends and colleagues who haven't played D&D or any other RPG at all. Thus, I'm aiming for my Homebrew '82 Player's Guide to contain enough introductory material for total newbies to get comfortable with it all.

Thus, here's a draft of a visual flowchart for the typical progression of combat...
Of course it will be backed up by several pages of text, but it may be useful to have this sitting out on the table. It's pretty basic stuff for most readers, probably, but hopefully useful for people just starting out.

FYI, out of curiosity, I googled the phrase "combat flowchart" and found a strange hodge-podge of quasi-similar things, but not much that fits into the old-school D&D-ish box that I'm comfortable with. Probably because combat is pretty simple in these systems (at least compared to the 3rd and 4th editions of ye olde game) and doesn't really call out for something like this. But still... newbies...  :-)

I should mention that I'm not intending to have a formalized "declare actions" phase in each round. I get the nuances of strategy that this can offer, but I generally agree with Cyclopeatron that it simplifies and speeds things up to drop this step, and also that the side that loses initiative already has enough to deal with (you know, like maybe dying before getting a chance to strike back?)

Also, I'm dumping lots of things into the "Take 1 melee action" phase. Attacks, parries/blocks, spell-casting (which is instantaneous), missile firing, sneaky maneuvers, or an extra burst of movement -- they're all possible actions, and they're all done in this step. This idea may be blasphemous to many readers used to spells and missiles going off first, but it's a reflection for how D&D always seemed to go for us back in the day... even when we started with the best intentions of following all of the rules to the letter.  :-)
Posted by Cygnus at 8:30 PM No comments:

On the Care and Feeding of Exemplars

I've got a loose amalgam of ideas floating around in my head, and I'm hoping that writing a blog post will help them congeal...

I began the day thinking about three close colleagues of mine who were at the White House today, receiving awards and shaking hands with President Obama. Of the three, one of them is something of a sleazeball, one of them is an overall decent person, and one of them is someone that I really look up to.  (Which is a hard thing for me to say, being the self-centered egotistical type... i.e., a blogger!)  Colleague #3 is what I think of when I hear the word gentleman. Someone that, after talking to him, despite the fact that he's probably 7 or 8 years younger than me, I tend to think "Gee, I'd like to be like him when I grow up..."

Why bring up these guys? This whole thing of admiring other people has so many strange cultural facets. It seems like the pendulum is always swinging between the extremes. Some rugged individualists tell you that to look up to someone else is a sign of weakness... other people sometimes seem far too eager to lose themselves in hero worship. Then there's the issue of admiring a person as a whole, versus focusing on a single admirable quality (especially if they're deficient in other areas). Believe it or not, I think Homer Simpson found the golden mean when he wanted to be an inventor like Thomas Edison: 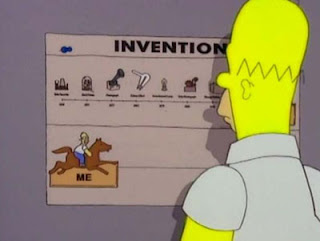 At best, "exemplars" help us to reach new heights... and to keep our egos in check when we think we're the best thing since sliced bread. Sure, obsessing about them isn't good, but neither is pretending they're not out there.

I think this does have something to do with games. I'm really glad that the world contains someone like Alexis Smolensk, who strives for excellence in D&D and doesn't settle for mediocrity. Also, these games let us play in arenas of human endeavor where there are quantified, hard-and-fast definitions of who is "better" than whom (in certain ways). That's far from politically correct these days. Seeing someone's skills and achievements in an RPG isn't a reason to feel bad about ourselves... we're inspired to match those achievements with our own noble deeds (or devious chicanery!). Does this -- gasp -- even make us better people?

Yes, yes, this comes dangerously close to the laughable comment made in that old X-Files episode: "Well, hey, I didn't spend all those years playing Dungeons and Dragons and not learn a little something about courage."  Still, there's a grain of truth in it, too.

Anyway, I'm not sure if this all has a point or not. Maybe the general idea of "not settling for mediocrity" is what we should strive for... and the exemplars just help remind us that it's possible to stick to those guns!
Posted by Cygnus at 8:45 PM No comments: 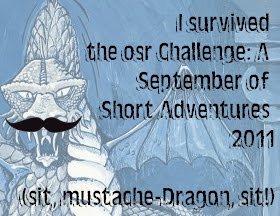 It was loads of fun! Thanks to /Matt for the idea of this challenge, and thanks also for assembling links to everyone's SoSA posts in one handy place! This will certainly help me catch up on lots that I missed.

I've now got to get back to finishing up the Player's Guide for Homebrew '82 ... and also finally finish cutting out the laminated cards for my DIY Dungeon board game.