I got the Middle Pillar of the Etz Chayim, rockin' me!
And nicotine, with a double dose of caffeine...

I'm a trifecta of creative fluids and movement
I got the bruises to prove it.
I'm a movement without a unity.

Voices speakin' to me - Through boards ouiji -
Divine tongues-hung, while the pendulum swung...
Spun oracles...

Spirit pulse!
Comin' from the Tablet of Union.
Angelic rhetoric... Sends sentiments -
Like the pleas pleading from penitents...

Know the pentagram - Of which you're in need and proceed -
To draw the lines even and so clean... I mean...
Your foundation is changin'
Whether you're ready to face it.
Cold and moist. Dry and hot.
Water and fire is not.
The only elements you've got:
Cold and dry earth... Dry and moist bursts of air...
Can fill the thirst first.

Spirit active or passive... the elements are massive...
When out of control -
The forces can roll or bowl over you.

We can be the people who people can see their dreams through.
And we can command, under will, these elements chill.

I try to fight, but these elements bite back!
It's like I'm fighting a non-visible miserable villain
that's hidden and vigilant.
Cold hearted, dirty and diligent...

With a militant vein, I try to rein my brain in -
Overwhelmed and consumed, I dig deep and think we can -
Defeat this big demon...
Even in defence. I'm relieved - And think we can
Overcome all obstacles...
Melt them like popsicles...
This is the gos-e-pel.
Saint SCHOLAR like Solomon... Callin' men and all women!

This is the beginin' the brimmin' of certain imminence...
This is the revision arisen with all magnificence...
Grab your wand in hand and command with me the elements!

"Scholar" is probably the only rapper/occultist/Cirque-de-Soleil-clown in existence.  You can find this song on his myspace page (there's some pulldown menu thing with a bunch of his other songs too).  He's also got a lot of stuff on youtube, but not this song.

Wow! Porky, over at Porky's Expanse, has passed the baton to my humble blog (and 14 cool others) for the Stylish Blogger Award.  I appreciate his effort to help out those of us who are just starting in this great blogging adventure. I wish I could link back to where this award started, but the chain of blogs just keeps going and going....  It's amazing how much awesome content there is out there. 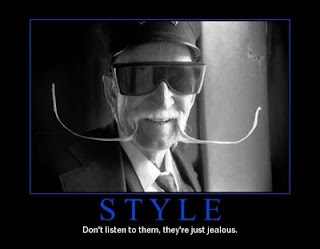 There are 4 rules, but I'm breaking house-ruling them...

1. Thank and link back to the person giving you the award.  That's an easy one! 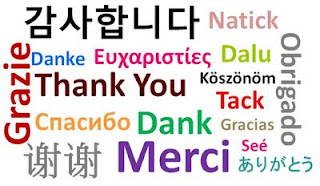 Well, let me think on that a bit.  It sounds a little Facebook/LiveJournal meme-ish.... How about for now if I just let you all know that 7 is the total number of offspring, wives, and cats that I cohabitate with?  :-)

I'll agree with Mike Monaco here that 10-15 makes this thing ripe for exponential Ponzification. But I do like the idea of letting the community know about cool blogs. Since much of my recent posting has been about RPGs, let me shine some light on some non-RPG blogs:
Okay, five is good.  :-)

There have been a lot of cool ideas bubbling up from the blogosphere lately about making the thief's role of picking locks and disarming traps into a more interesting challenge for players. Alongside this discussion has been a bit of meta-commentary on how much is too much in this regard, too.  In many cases, both GMs and players may really just want a simple, one-roll, resolution system.

For Homebrew '82, I've decided to unify many non-combat (and non-magic) resolutions with the so-called ESDVAN system (see post on using ability scores), where one tries to roll under one's ability score on a number of d6 -- the number of which increases with the difficulty of the task.  For thieves/rogues trying to do those nasty things that untrained rubes are likely to fail at, they replace their DEX with a specialist ability score (SAS) that depends somewhat on DEX, but also goes up with increasing experience. For example, a rogue with DEX of 15 has a SAS of (16+L),
where L is his or her experience level.  Even an initially clumsy rogue with DEX of 8 or less has a SAS of (13+L), since training can do a lot to overcome biology!  (In many flavors of D&D, a thief's chances at success don't depend on DEX at all!) The chances of success for a Very Difficult (5d6) or Arduous (6d6) task have a similar level progression as do many thief skills in, say, 1st edition AD&D.

But what about all the recent raking, bumping, and probing?  Are there ways to take a one-roll system like this and flavor it up a bit without too much extra complication?  I think so. If the resolution roll is a success, then all is hunky dory.  But if it's a failure, then that's where the fun begins. In Homebrew '82, a rogue must first tell the GM how much time and/or care is being expended with any given attempt.  A 20-minute patient bit of tinkering will likely have a different failure-outcome than a reckless, 10-second try!  So, if the attempt fails, roll 1d6 on the FF table (Finessing a Failure? Forestalling a Fiasco? Fineousing a Fingers?) and use the relevant row:

What the symbols mean depends on the task at hand:

For disarming a trap, + means a brief moment of worry where the trap looks like it's about to spring, but it jams and everyone is safe. 0 means the trap is sprung slowly, with lots of creaking or other advance warning noises, and it generally does half damage to anyone in its range. X means it springs, and full damage is done.

Of course, if the players have knowledge of this table, then it's the GM's duty to still mix things up a bit with some evocative, tension-filled descriptions and occasional outcomes that are outside the strict bounds of the above interpretations. Maybe a lock-picker gets a few hit points of damage on an X.  Maybe that  poison gas trap still spews out a little something even on a result of +.

I'm also wondering if this can be used with other non-mechanical skills.  Two others that may be relevant are: putting on a disguise, and preparing a dose of poison (i.e., they benefit from more prep-time and finesse).

The CE3K board makes no sense

Okay, so loooong before I became fascinated with the Glass Bead Game, and its goal of a symbolic language that unifies art, music, mathematics, and science, there was this: 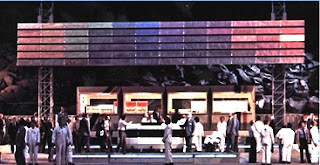 This is the big color/light/musical-tone board from the end of Close Encounters of the Third Kind that was used to facilitate communication with the aliens. Throughout that movie, the scientists were struggling to understand how the aliens were communicating using musical notes. They also used some real-life hand signals for the notes, but what everyone remembers is that five-tone sequence that got played hundreds of times in the movie...

So yes, it was my unbridled geekdom at the age of 10 or whatever to be fascinated by the implied correspondences between the colors and rectangles on that grid and the musical notes. For example, what was the system used to position the notes on the board and to determine what color went with what note?

Homebrew '82: Training for next level

I hope to get back to making more posts outlining my evolving retro-game, Homebrew '82. As I may have said before, it's not intended to pave any new roads into uncharted, gonzo territory, just to serve as a "re-starting point" for a game that I'd feel comfortable running. If I do ever decide to start DMing again, it would most likely be with friends who've never played, or maybe just tried it in the 1980s, so system won't likely be their big concern.

Anyway, I'm having fun with thinking about what happens when PCs need to train for their next experience level.  This can be an interesting "mini-game" (sort of like character generation) in itself. So instead of just rolling for new hit points and making some changes to the character sheet, what should happen?  Well... 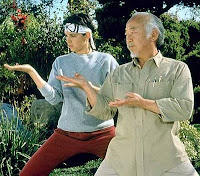 This doesn't look like it would take much time for each character that's gaining a new level, and it adds some good role-playing flavor to the process.

I love this time of year.  We still have a tiny bit of snow left on the ground, but spring is springing.  It's super-cliched to talk about spring as a time of endless possibilities opening up -- and many years can go by without feeling that feeling -- but this year it hit home.  I just went out for my first outdoor exercise walk since last fall, and it felt great. The song "Mission" by Rush came up on the random shuffle, appropriately inspirational...


Hold your fire -
Keep it burning bright
Hold the flame 'til the dream ignites -
A spirit with a vision is a dream with a mission....

During that song, I brushed against something on the keys I was holding in one hand. It was a small piece of useless metal that has been hooked onto my key chain for several decades.  How appropriate... I added that thing to my key chain in 1989, back when I was still playing D&D on weekends. It was given to me by this guy, 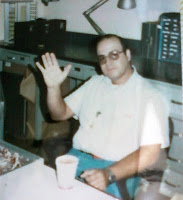 Larry, after I had known him for three years prior.  Three years that I was working for the research group from hell, the group with the super-rigid hierarchy, and me always at the bottom. He felt my pain and heard my griping. But 1989 was when I finally broke away, into a group that actually gave me real stuff to do, valued my input, didn't chain me to a Bridgeport milling machine for 8 hours at a stretch.  :-)

In a techy-looking control room down the hall from the machine shop pictured above, I was monitoring some readouts on something or other, and Larry was there in case anything important broke down.  In the down-time, he was playing with some small bits of stainless steel wire with a needle-nose pliers.  I was glad we got a chance to reconnect, and I told him about how this new group was everything the old one was not.  When he got up to eventually go, he tossed me this small figure-8 piece of steel.  I decided to see it as not vertically as an 8, but horizontally as an infinity sign... and a sign of the limitless future ahead.  It's still on my key chain 22 years later, 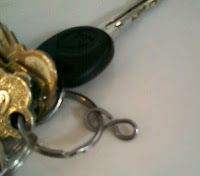 a reminder to never settle for crap and always push those limits.
Posted by Cygnus at 1:40 PM 2 comments: