It's been a busy spring, but I want to be sure to post to the blog when there's something I'm excited about.  Given that this something has to do with games, spirituality, and math... I think it counts.

When I was 12 or 13 years old, I became obsessed with a little book in my school's library.  Rebirth: The Tibetan Game of Liberation described a strange cousin of "Chutes and Ladders."  Seemingly originating in the 13th century, this was a game of 104 squares that essentially led you from hell (at low numbers) to heaven (at the top).  You started out near the middle, at square #24, and you rolled dice to determine where you go next.  You can go up or down, of course.  Each square has its own unique set of rules for where the dice take you next.  You can get stuck in some squares for a long time.  The closer you get to Nirvana at the top, the less of a chance you have for going back through the nasty stuff at the bottom... 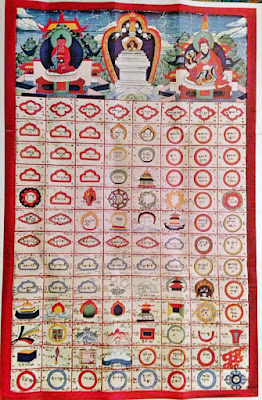 I've never been a Buddhist, but I was obsessed with this thing as a kid.  Along with D&D's systematized lists of gods and outer planes, I suppose I was eager to find some mathematical rigor in the often woo-woo world of spirituality.  I copied out the board onto a large piece of cardboard.  I still have it, 40 years later.  Here's a piece... 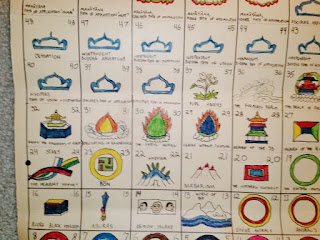 A few days ago I got to thinking about this game again, and I looked up some details online.  For the fun of it (shut up), I wrote a computer program to simulate the square-by-square rules and was thus able to run thousands of random games.  It was cool to learn that the most probable number of "turns" was about 93.  The shortest possible game I think runs about 18 turns, and the longest ones that my computer churned through were about 430 turns in duration.  Oh, the wheel of karma can sometimes be cruel.

I was also curious about how the game tended to progress from the lower to the higher levels, so I made a graph of 200 random games, with time normalized such that the longer and shorter games all are squeezed into the same start-to-finish range: 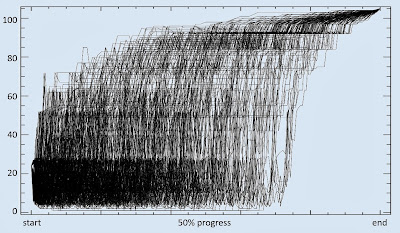 I find it interesting that there's such a tight cluster of activity in the lower realms (below about square #26) in the first third of the game, then the probabilities spread out to nearly everywhere.  Once you're about two thirds of the way done, though, you rapidly converge on the higher nirvanas and make increasingly steady progress to full enlightenment.

I also found an article by someone named Jonathan Doner, which proposed that the overall concept of this game could be "reskinned" straightforwardly to other spiritual traditions.  (I'm so doing that.)  The article goes on to talk about how playing the game could be a useful means of general education for an enlightened citizenry -- a possible path to the ancient Greek concept of paideia, perhaps.  For sure, it reminds me of the lofty sacramental goals of my own little slice of nirvana: the Glass Bead Game.  We'll see where this leads....