Wind's in the East

A few days ago I finally saw Saving Mr. Banks, a recent quasi-historical look into the meeting between Walt Disney and P. L. Travers, the author of Mary Poppins. 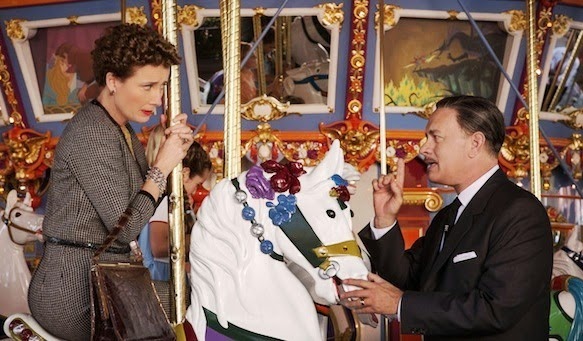 Forewarned: This post really isn't a review of the movie; more so a smattering of my impressions, and some hints about other things it spurred me to think about.

I've got Suze to thank for putting this on my radar.  For a good stretch of time in my single-digit years, Mary Poppins was my favorite movie.  In those pre-VHS days, I was lucky that the Disney classics were on a near constant rotation in the 99-cent matinee theaters, so I saw it many times.  At age 6, of course I identified with the Banks children, and I had a magical nanny figure in my own life, too.  It probably wasn't until I saw the movie again in my early 20s that I realized that Mary Poppins had another reason for blowing in with the east wind: the redemption of the father.  I don't think it's exaggerating to say that this realization held lessons for me that I continue to draw from, especially now as a father myself.

If all Saving Mr. Banks does is to convey a bit of that to its audience -- and to highlight the wonderful (and absolutely unabashedly unsubtle) ways that the music of the Sherman brothers accomplished it back in 1964 -- it deserves as much praise as I can give.  But I think it does a bit more, too.

It's cliched to talk about how our lives are enriched by stories.  This movie, I think, pierces to the heart of this cliche and shows how it works, and why it matters.  Telling stories remakes the world.

There are two senses that the above is true:  In a literal way, when people hear stories that uplift them, they can be inspired go out into the world and do things they might not have done before.  Even apocalyptic dystopias can cause people to work hard to make sure the bad stuff doesn't happen.

The second way is more subtle.  Stories shape our surreality, and literally change how we think.  Last year I began reading Douglas Hofstadter's newest book that suggests the making and manipulating of analogies is the core activity of the human mind.  He starts with the simple ones, involving single concepts and phrases, and then goes on to say that fictions and narratives are just extended versions of the same thing.  I suppose this is also related to the "scripts" of Transactional Analysis, which I mentioned in my last post.  (Many others have realized this, too; see hints of it in the "Darmok" episode of Star Trek: The Next Generation, and in J. R. R. Tolkien's classic essay "On Fairy Stories.")  I'm convinced that any Glass Bead Game worthy of the name is going to have these ideas at its core.

Back to Saving Mr. Banks, there's also another level of "remaking the world with stories" here, in that the actual, real-world interaction between Walt Disney and P. L. Travers didn't quite go the way it did in the movie.  Much like Travers may have used Mary Poppins to remake her troubled childhood, screenwriters Kelly Marcel and Sue Smith did some remaking of their own.  But to valuable effect, I say.

(And, much like another recent controversial bit of historical storytelling -- the tale of Giordano Bruno in the new Cosmos TV series -- I'm less upset about the inaccuracies than I am that some of the most "prickly" and avant garde aspects of their lives weren't highlighted.  Travers, like Bruno, was far weirder and cooler than her depiction made it seem!)

It's time again for a not-so-random collection of pictures.  I'm not sure why I'm enjoying these kinds of posts so much, these days.  Don't worry, though; the final two moves of the Ode to Joy Game are coming soon.

Today I've found some interesting diagrams that involve stories and narratives.  I make no secret of the fact that I'm on a lifelong search for the meanings and formulas behind stories (see here and here, for example).  I've gotten lost for hours in the land of TV Tropes, too.  :-)

Before getting into the temporal flow (cause and effect, tension and release) in stories, how about just themes?

This Venn diagram of themes that appear in Shakespeare's plays comes from someone named Straight Edge who's got some other interesting thoughts about the Bard (and games, and Star Trek).  It's interesting how the Scottish Play winds up at the center, inside all four categories.  I also wonder if there's something insightful in knowing that there are no plays with the supernatural that don't also involve some romance or war.

But okay, we can put aside ol' Willie S. for a while.  I know where the narrative center of the universe really is... 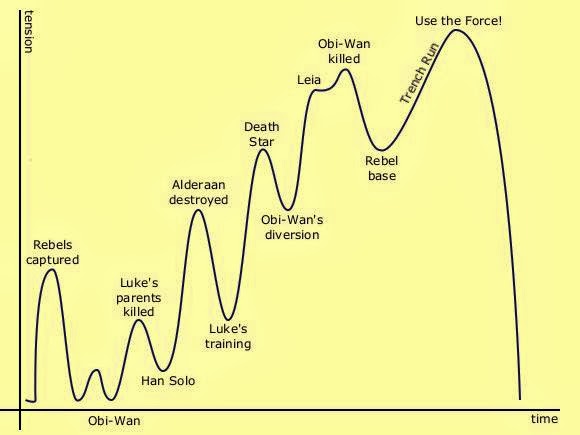 This is a (subjective!) view of the "tension level" experienced throughout a viewing of Star Wars, that I found here.  I've talked before about how the rising and falling of tension may be a central component of "grammar" in a universal common language that ties together disparate ideas into Glass Bead Games of the future.  Seeing examples plotted out like this is very helpful for starting to flesh out that grammar.

Next up is the visual grammar of comic books.  Author Scott McCloud has done a lot in recent years to highlight that the combination of words and pictures in the comic medium can give rise to totally new artistic possibilities that don't exist when one uses either one or the other.  The following is from his 1993 book Understanding Comics: 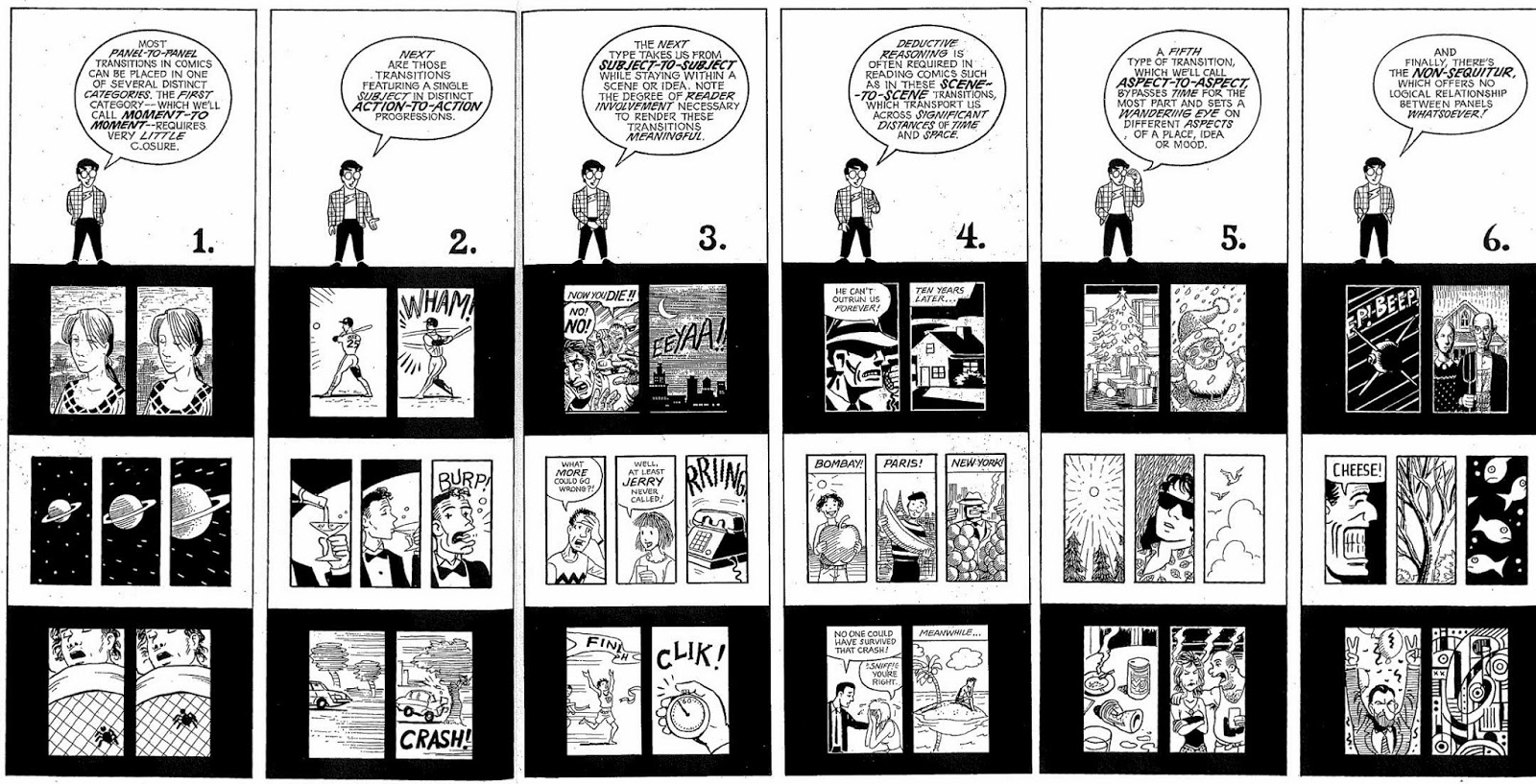 The human brain is pretty awesome for being able to build a coherent story out of a succession of images that uses all of these different transition types... and not even realize it's doing it.

And now for something completely different.  :-)

When I was 10 or 11, I was given a book on a new-fangled psychological theory called Transactional Analysis.  This theory has been notable for creating some pop-culture phrases ("I'm OK, you're OK," "warm fuzzies," "strokes") and helping people to understand the "games" and "scripts" that can sometimes be played out without us really knowing it.  Although I haven't thought about this theory much over the decades, whenever I read over its basic ideas, I think that many of them settled quietly into my brain.

A key concept in TA's conception of the personality is the existence of three quasi-separate modes of behavior.  Sort of Jungian archetypes, I suppose: the Parent, Adult, and Child: 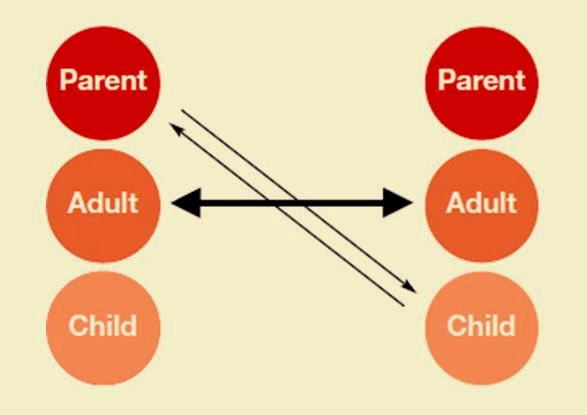 Generally, the Parent and Child roles are created from one's early experience, and "Adult" is a more neutral and rational role that is primarily characterized by the absence of the Parent/Child dynamic.  The connection to plots and narratives comes into play because an interaction between people can play out very differently depending on the roles they are adopting.  The image above is a dysfunctional "crossed" dynamic where one person is relating in an Adult-to-Adult way, but the other is responding in a Parent-to-Child way.

Putting aside the actual insights of this theory, though, I also think I gravitated toward this because of my love of the symbols and colorful graphics.  :-)
Posted by Cygnus at 8:19 AM 6 comments:

We're getting closer to filling up the board now!  (Scroll down the past few weeks of posts if you don't know what this is all about...)  Today I'm placing Glass Bead number 8 out of 10, and it's in the lower-left spot.  See that stylized lower-case "n" with a German umlaut over it down there? 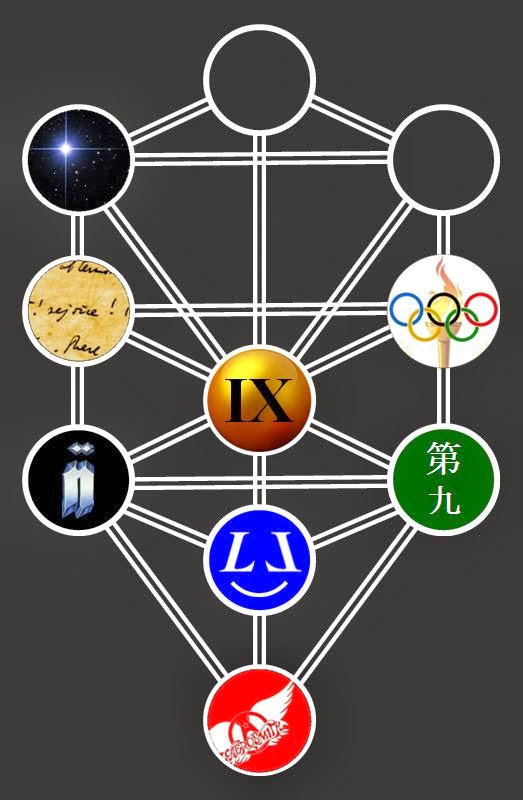 That's right, it's Spinal Tap!  The classic mocku-rocku-documentary film from 1984, written and directed by Meathead himself.  My symbolic image above points out their subtle joke of the "heavy metal umlaut" being added willy-nilly to letters where it doesn't belong (see, e.g., Mötley Crüe, Blue Öyster Cult, and so on).  They of course "turned it up to 11" by applying it to a consonant.

I guess there's not much that can be said about this movie that hasn't already been said.  It continues to make me laugh whenever I see it, and I'm always discovering new little jokes here and there.  This, I think, provides justification for a link to my blue-in-the-face "laugh lines" bead to its lower-right.  The link to Aerosmith's "Dream On" at the bottom is also pretty clear... David, Nigel, and Derek were no strangers to the over-earnest (maybe a tad over-wrought?) lyrics and guitar licks on display from Steven, Joe, and friends.

The link to Aleister Crowley's central word "rejoice!" from his occult masterpiece is less of a slam dunk, but Spinal Tap did enjoy exploring the mystical side of British history...

Not too far in theme from some of Crowley's poetic excesses, I think:


Thrill with lissome lust of the light,
O man! My man!
Come careering out of the night
Of Pan! Io Pan!
Io Pan! Io Pan! Come over the sea
From Sicily and from Arcady!

The final link is with Beethoven's Ode to Joy in the central spot.  I don't think Beethoven himself was name-checked in the movie, but Nigel Tufnel was once seen composing a classically inspired piano piece, inspired by "Mach" (mash-up of Mozart and Bach?).  Of course, he then let on that the title of his composition was "Lick My Love Pump," so the correspondence may not be all that perfect.  :-) 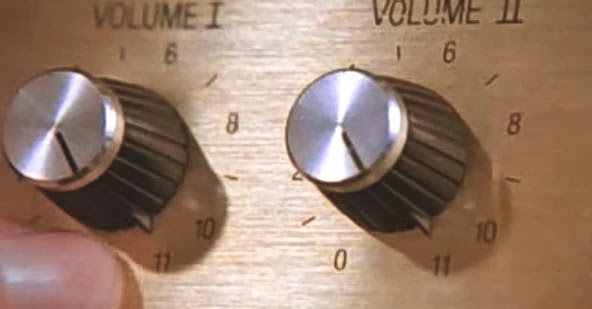