Move 2 in the New Game

Here we are, on the last day of 2021.  I'd like to play the next move in the Hipbone-style GBG that I started in the previous post.  Since I'm using these games to explore the bounds of what makes sense (and what doesn't), I'll make a weird choice and put down an idea in a spot that's not connected at all to the first idea.  We'll fill in many links, I promise.

Thus, in the fourth spot down from the top (if you follow one tradition's "lightning flash" zigzag path), I place Rory Williams, the Last Centurion. 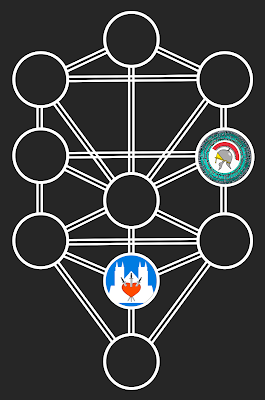 For readers who don't watch Doctor Who, Rory was one of the best characters from the 2010-2012 Matt Smith (11th Doctor) era.  I've waxed on about this Doctor, but not much about his human companions.  Rory started out as someone who got left behind, when his fiancee Amy Pond began traveling with the Doctor.  Then he turned into a bit of a joke about dying (and being brought back) multiple times.  But his shining moment was in the Season 5 episodes "The Pandorica Opens" and "The Big Bang," when he came back as an immortal (?) plastic (??) Roman centurion (?!?!) in the year 102 AD.  When Amy got trapped inside an impregnable cube called the Pandorica, which wouldn't open again until the year 2010, Rory realized that the only way to protect his one true love was to stand guard, and not waver, for the next two millennia.

The Doctor: Two thousand years, Rory. You won’t even sleep. You’ll be conscious every second. It would drive you mad.
Rory: Will she be safer if I stay? Look me in the eye and tell me she wouldn’t be safer.
The Doctor: Rory, you...
Rory: Answer me!
The Doctor: Yes. Obviously.
Rory: Then how could I leave her?
The Doctor: Why do you have to be so... human?
Rory: Because right now I’m not.

So, he waited.  And waited.  And became so much of a legend that museums had exhibits devoted to him.  I'll add another quote from one of those exhibits:

According to legend, wherever the Pandorica was taken, throughout its long history, the Centurion would be there guarding it. He appears as an iconic image in the artwork of many cultures. And there are several documented accounts of his appearances. And his warnings to the many who attempted to open the box before its time. His last recorded appearance was during the London Blitz in 1941. The warehouse where the Pandorica was stored was destroyed by incendiary bombs. But the box itself was found the next morning a safe distance from the blaze. There are eyewitness accounts from the night of the fire of a figure in Roman dress carrying the box from the flames. 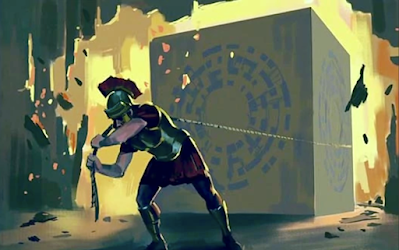 My icon on the game board combines Rory's centurion helmet with the whirly circly pattern from the face of the giant cubical Pandorica.

I've always loved the trope of taking the goofiest of goofball characters and having them be the ones who choose to do the noblest, the most honorable, and the most difficult things for the sake of love.  Maybe we'll see more of this as the game progresses.  :-)

It may no longer be the heyday of the blogosphere, but I still enjoy coming here, jumping into the river of ideas that's been flowing since 2011, and being Cygnus again for a little while.

Thus, despite having no idea who even reads this blog any more, I'm going to start a new project to exercise my Glass Bead Gaming muscles.  Back in 2014, I decided to take a break from the top-down design process and just play one of the existing game variants.  The result was the "Ode to Joy" game that started here, ended here, and has its intermediate moves listed here.  Let's try that again.

For those who haven't seen it before, I'll paraphrase some of the explanations from the beginning of that game here.  The idea, when playing by the late great Charles Cameron's Hipbone rules, is to lay down a pattern of interconnected cells, like this... 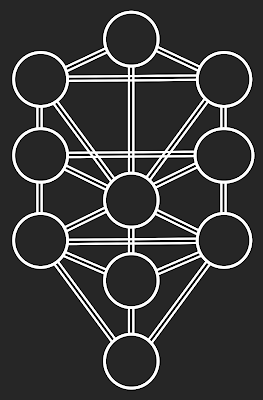 ...then start "composing" a game by positioning specific ideas in each cell.  The challenge is to always ensure that neighboring cells (connected by lines) correspond to ideas that are interconnected in some way, too.  The ideas can be text, images, pieces of music, logical arguments, or references to other works of art or science.  The connections between the ideas can be whatever one wants them to be.

There can be competitive or collaborative games, where multiple people take turns claiming cells one by one.  In this way, they can challenge one another to find connections between wildly disparate or disjointed ideas.  My Ode to Joy game in 2014 had a bit of successful crowdsourcing for new ideas, but there's value in the solitaire exercise, too.

Okay.  The seeds of this game were planted last week, when I heard the song discussed below on the radio, and I started thinking about its other implications.  As of right now, I have tentative ideas for 8 out of 10 cells on the board, but that may evolve.  I'll try to post new moves about once a week, but we'll see what life has in store.

My first move is to place Hozier's 2013 song Take Me to Church in the second cell up from the bottom. 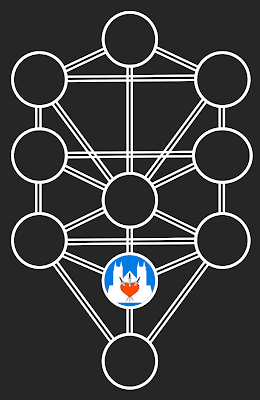 Those who recognize the board from Kabbalah may know this cell as the dreamy, emotional realm of Yesod, but that's not too important here.  My silly icon above is just a juxtaposition of a cathedral with the memorable central image of the Tarot's Three of Swords card, whose triply pierced heart indicates, well, the sweet heartache that Hozier hints at in the chorus...

I'll worship like a dog at the shrine of your lies
I'll tell you my sins so you can sharpen your knife
Offer me my deathless death
Good God, let me give you my life

If you've heard the song, you know the verses go even further, essentially equating the singer's beloved with the only deity worthy of worship.  I've been there, dear readers, I've been there.  The good Irish songwriter, Andrew John Hozier-Byrne, also tossed in some barbs at his own native Catholicism -- specifically the doctrine of Original Sin -- for good measure.  Suffice to say that worship-leaders appropriating this song for Sunday services may not be reading the lyrics closely enough.  This possibility of misinterpretation reminds me of when Billy Joel joked about "elevator-muzak" versions of his (minor-key) song Pressure that were transposed into a peppy major key.

Hozier's Take Me to Church, by the way, is in the key of E minor, which a 17th century music textbook called "amorous and plaintive."  Maybe that's true for my entire planned game.  We'll see.

Posted by Cygnus at 9:14 AM No comments: