Church of the Big Gamble

Apologies for not a lot going on here lately.  I'll know the new direction I'm looking for when I see it.  :-)

The other day I came across a really thought-provoking blog post by Joey Vigour in defense of randomness in games.  It helped to explain some of my own (unformed) thoughts and predilections. 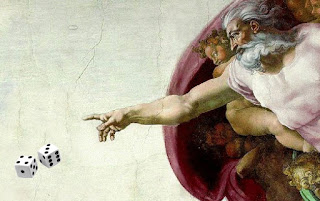 The basic idea is that there's a sweet spot between the two extremes of order and chaos.  Staying balanced on that knife-edge is difficult, but well worth it.  The more I thought about it, the more I'm sure this general idea applies to lots of things.  Let me just list a few of them...

Games:  Joey Vigour explained that including the "dark forces" of randomness (dice, cards, etc) in a game gives us a glimpse of the craziness of life.  I'll just let him tell you:


"So why do most game designers introduce an element of randomness to their games? I would argue that dark mystical (or at least unknown) forces are a game designer's ally because the introduction of chaos to a game causes our subconscious to be reminded of real life. Games are a simulacrum of life, but all the beautiful photo-realistic art and all the flavor text is still just fluff on top of the Spark that moves us emotionally. Understanding the Spark is the struggle of all artists: to know that there is unknowable, and to grasp at it in a comprehensive presentation."

Vigour also considers human strategizing as being in the same category with the dark forces of randomness -- after all, other people can sometimes be as inscrutable and hard to predict as a roll of the dice! -- so games like Chess can also invoke these feelings.  Still, too much of the human/random element in a game can be pointless and dreary (like never-ending games of Chutes and Ladders).  Too little of it gives you something easily solved, like Tic-Tac-Toe.

Stories:  The knife-edge between order and chaos is apparent in narratives, too.  Too much order gives us the logical tying and untying of plot-driven "knots."  I'm thinking of the inevitability of events in things like Greek and Shakespearean tragedies.  Fatalism can sometimes be interesting, but not in isolation.  Too much chaos is just surrealistic dada.  :-)

Life:  Too much order leads you right into a rut.  (Think of Mr. Incredible stuffed into his tiny car on a traffic-filled freeway... that had to be inspired by this song.)  Too much chaos means adrenalin and stress all the time, which is just plain not good for you, whether you're a superhero or not.

Music:  Goes without saying, I think.  Our ears and brains have evolved to respect the knife-edge between monotonous order and dissonant chaos.

There are probably so many other examples... enough to build a Glass Bead Game worthy of the ages, I'm sure.  By the way, the title of this post comes from old-school D&D; see here for more about my own history with it.


"So let’s embrace dice rolling, deck shuffling, hidden information, and mystery in games. It’s what our subconscious relates to anyway. It’s how we lose our forgetfulness and reconnect with hidden truths. It’s how we find ourselves. Anything less than that is just Tic-Tac-Toe."