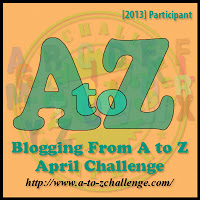 April is almost here!  On Monday I begin spamming posting once per day, except Sundays, on my theme of "An A to Z of Masters of the Imagination that You Oughtta Know About."  Each day will see a brief profile of a super-creative artist, author, magician, or whatever, along with some choice quotes or snippets that show you why I'm so enamored of their output.

A couple of warnings...  First, I hope not to disappoint my RPG-playing readers by posting a lot of stuff that may not be quickly adaptable to the game table.  I'm taking the long view, I guess, that good inspiration from these creative weirdos can be the seed of a lot of quality gaming down the road, even if the ideas may need time to stew.

Second, I'm not sure how well I'll be following the detailed advice of the good folks at the A-Z Challenge.  I will do a post on each letter on its proper day, but beyond that, everyone has different ideas about what makes for good blog posts -- and good bloggers!  Caveat emptor.  :-)

Lastly, I wanted to put up some kind of teaser for whom I'll be posting about, without actually giving away the names.  I realized that 26 entries is just about right for the number of songs on a classic double album.  Thus, to give you a taste, here's the track list for that album, with song titles crafted from little bits and pieces of each days' post (or just random factoids about the person being profiled).  Feel free to speculate about the identities of my weirdos in the comments, but I won't confirm or deny until the time is right...

The third and final Tiny Harmony of March is here...  I've got only one haiku, but I tried to draw inspiration from all three themes (quench, loam, and the real) and create an alchemical mixture... 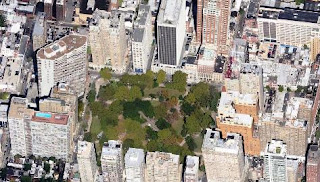 My little garden,
Hemmed in by towers of change.
I keep watering.

Yes, I know... I'll own being a crusty ol' curmudgeon about some things.  Note that I didn't say that I totally reject the changing world around me... that wouldn't be acknowledging the real, would it?  :-)

Apologies for not posting more... I've been racking up the posts for the April A-Z Challenge (see more about my theme here), so please stay tuned for the coming deluge in just over a week!
Posted by Cygnus at 6:37 AM 19 comments:

Okay, it's looking like I'm not the riddlesmith I thought I was.  My original idea was to put all the explanatory stuff below into the previous post, but then I tried to be too tricksy for my own good.  :-)

Answer time.  Who was my haiku describing?


left at the crossroads
by science, she takes a right
and calls herself art

She is magic.  And she seems to be in real need of some adaptability... 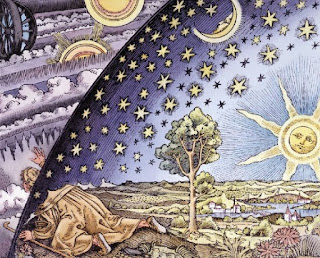 When I was traveling last week, I finally settled down to read an 11,000 word essay that has been circulating on the interwebs for a few years.  In 2002, famed, crazy-bearded graphic novelist Alan Moore wrote Fossil Angels, a poetic, polyphonic polemic about many things, but mostly about how the modern "occult" community has made itself irrelevant by tying itself too tightly to nostalgia and empty ritualism.

Moore's suggestion?  A bit too gleefully, he suggests that "What this place could do with is a good insurance fire."  Let all that crusty magical tradition and OCD-ish superstition burn itself out, he says, so that the resulting black loam of raw ideas can recombine in a new kind of natural selection (super-natural selection?) to form something new and vibrant.


"Art’s only aim can be to lucidly express the human mind and heart and soul in all their countless variations, thus to further human culture’s artful understanding of the universe and of itself, its growth towards the light. Art’s method is whatever can be even distantly imagined. These parameters of purpose and procedure are sufficiently elastic, surely, to allow inclusion of magic’s most radical or most conservative agendas? Vital and progressive occultism, beautifully expressed, that has no obligation to explain or justify itself. Each thought, each line, each image made exquisite for no other purpose than that they be offerings worthy of the gods, of art, of magic itself."

It's ironic that modern-day magic (which is all about transformation and polymorphous change) has fallen behind in adapting to our current circumstances and knowledge.  Science and technology took over many roles that used to be filled by a more magical way of thinking, leaving it at the crossroads of irrelevancy.  Turning itself into art may be just the amrita it needs...

I'll give you two other quotes for flavor, but, if it's your Will, feel free to read the whole thing!  :-)


"If magic were regarded as an art it would have culturally valid access to the infrascape, the endless immaterial territories that are ignored by and invisible to Science, that are to scientific reason inaccessible, and thus comprise magic's most natural terrain. Turning its efforts to creative exploration of humanity's interior space might also be of massive human use, might possibly restore to magic all the relevance and purpose, the demonstrable utility that it has lacked so woefully, and for so long. Seen as an art, the field could still produce the reams of speculative theory that it is so fond of (after all, philosophy and rhetoric may be as easily considered arts as sciences), just so long as it were written beautifully or interestingly. While, for example, The Book of the Law may be debatable in value when considered purely as prophetic text describing actual occurrences or states of mind to come, it cannot be denied that it's a shit-hot piece of writing, which deserves to be revered as such."


"We could make this parched terrain a teeming paradise, a tropic where each thought might blossom into art. Under the altar lies the studio, the beach. We could insist upon it, were we truly what we say we are. We could achieve it not by scrawling sigils but by crafting stories, paintings, symphonies. We could allow our art to spread its holy psychedelic scarab wings across society once more, perhaps in doing so allow some light or grace to fall upon that pained, benighted organism. We could be made afresh in our fresh undergrowth, stand reinvented at a true dawn of our Craft within a morning world, our paint still wet, just-hatched and gummy-eyed in Eden. Newborn in Creation."

I can add nothing.

This week's tiny harmony is a haiku riddle:


left at the crossroads
by science, she takes a right
and calls herself art

Who is she?  Or, more accurately, who was she before she renamed herself?  And how does she relate to the theme of "adaptability?"  The only hint I'll give right now is to say that sometimes good fortune 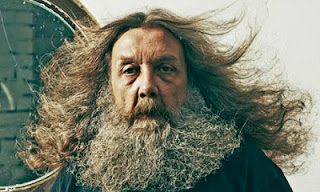 Apologies if I'm being overly obtuse.  In a day or two, I'll do a follow-up post with the answer and a mini-review of a very special piece of writing that inspired all this.  (If someone guesses correctly, I'll expedite the follow-up.)
Posted by Cygnus at 9:08 PM 17 comments:

Today marks the second time I've posted to the blog from an airport, twiddling my thumbs while a flight has been delayed... There's zen and poetry in that, I'm sure, but I'll stick to today's main topic:  A new blog challenge... Tiny Harmonies.  The task:  Respond to a given one-word theme with a 17-syllable haiku.  The theme for this week:  ORIGIN. 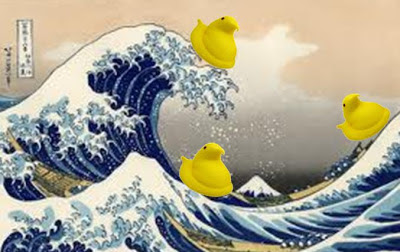 My response has to do with my own...

Not quite an iconic panel from comic-book history, but it's a start...  :-) 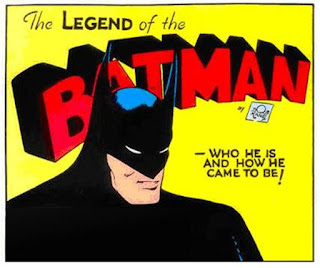 You know what they say about best laid plans.  In late January, I announced my intention to enter William Dowie's contest to craft an old-school role playing game adventure with an ancient Roman theme.  I got a cool idea, and began running with it, but the contest deadline (the Kalends of Febrvarius) was just too soon.  The contest finished up with my minim opus only about halfway done.  The winners of the contest were announced a few weeks ago, and I'm curious to see what they came up with.

However, never one to let good sense be my guide, I kept working on the darn thing, and finally finished it.  Thus, I give you XVI Troop, a free 16-page adventure setting guide for old-school D&D (or compatible rules).  I've uploaded the PDF file to Google Docs, or whatever they're calling it now, at this URL.  I've also modified the top bar of this blog to collect together all of the "Free RPG adventures" that I've produced and am distributing, well, for freeee.

Fans of a certain moldy old TV show will no doubt groan at my punnish title.  But the idea of an out-of-the-way army fort -- with lax military discipline and too much fraternization with the natives -- was too irresistible not to adapt to the wilds of northern Britain (just beneath Hadrian's Wall) circa 140 AD.  What I've put together has a bit of a mini-gazetteer for this fort and its environs, a bit of detail on how to adjust D&D character generation to give your fictional alter egos some ancient Roman flavor, and a bit of help for the Dungeon Master in coming up with interesting scenarios, events, and non-player characters.

As a teaser, here's a table of Roman character quirks that will surely get the "Life of Brian" jokes running fast and loose...

Back From the Future

I never officially signed up for the Back From the Future blog hop, but after seeing one entry today, an idea popped into my head.  But first, da rules:

You're up before dawn on a Saturday when the doorbell rings. You haven't brewed your coffee so you wonder if you imagined the sound. Plonking the half-filled carafe in the sink, you go to the front door and cautiously swing it open. No one there. As you cast your eyes to the ground, you see a parcel addressed to you ... from you.

You scoop it up and haul it inside, sensing something legitimate despite the extreme oddness of the situation. Carefully, you pry it open. Inside is a shoebox -- sent from ten years in the future -- and it's filled with items you have sent yourself.

Just a single piece of paper.  At the top is a short note signed by a symbol that makes me know with certainty who sent it.  It says:


"In a year or two, you'll have the ability to install a program on your computer that will alert you immediately (with as loud a sound as you desire) if and when you type a certain phrase.  Install it, and make it scream bloody murder if it detects the following keystrokes:

It doesn't matter what the asterisk wild-cards are.  Just freakin' do it."

Below that note is a scan of the abstract of a scientific paper that's dated from the early 2020s.  I read it once, then I read it again, then I hit my forehead with my hand.