Update on the Right Stuff RPG

Back in 2012, I mused for a few posts (here and here) about an idea for a new game that allows players to recreate the excitement of not only the 1960s space race, but also the way things "could have been" in the succeeding decades -- moon bases, orbiting agricultural colonies, terraforming Mars, and so on.

Anyway, I just learned about a fascinating new game, just published this year, that covers some of this territory.  I admit that my first thought was along the lines of "Oh no, have I been scooped?!"  However, reading its rules has been a huge help in figuring out what I want my game to be, and what I don't really want it to be. 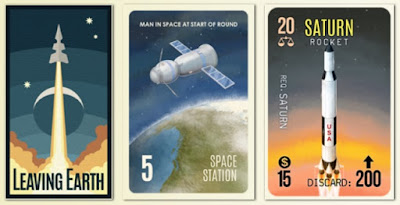 Leaving Earth is a tabletop board game written by Joseph Fatula and published by the Lumenaris Group.  Each player takes the role of a space agency, and the goal is to plan missions, build spacecraft, manage risk, and reach for the stars!  In itself, this isn't a new concept.  A year or so ago I also came across a much more detailed game/simulation on the same topic: Phil Eklund's High Frontier.  But Leaving Earth aims to shave off enough of the scientific and engineering crunchiness to make it a fun experience for players of all backgrounds.  It's essentially the same level of complexity that I'm looking to hit in my game.

Despite my love of all the techy goodness of space mission planning -- and I say that without an ounce of irony -- I think that my original "Right Stuff RPG" (name to be changed to avoid getting in trouble) wasn't really about that, um, stuff.  I was always thinking more about the personalities of the astronauts and the ways that they made larger-than-life history.  You can see even in my placeholder name that I consider it a Role Playing Game first and foremost.

I want each player to really get into their chosen astronaut characters, to care about them as people.  And, of course, to inject something of themselves into their characters, too.  Balancing the first (play acting) with the second (wish fulfillment?) is a juggling act that tabletop RPGs have been trying to perfect for more than 40 years now.  I'd love to prod players toward that goal, but traditional RPGs like D&D have an open-endedness of "plot" that requires a knowledgeable DM to manage it all.

Thus, the big question is:  How much of that experience can be programmed into a more casual kind of game?  I still have no answer to that, but I'm always open to inspiration...  :-)

Posted by Cygnus at 9:03 AM No comments:

As you may have guessed, I'm not going to let the lack of a new, over-arching theme for this blog stop me from posting about random stuff that I find interesting.  So, let me take this opportunity for a picture post in which I convince you that keyboards are cool. 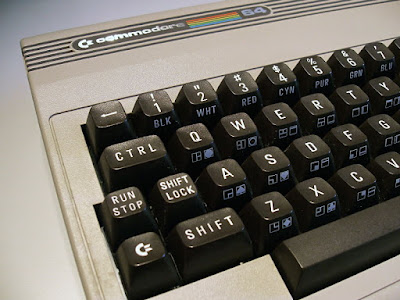 The above is a close-up of part of the Commodore 64 keyboard.  I spent much of the 1980s figuring out the innards of that beastie.  It served me well.  Note that even back then, there was a superfluous "operating system brand" key -- I remember the "Commodore key" giving access to the weird emoji-like symbols you can see printed on the fronts of the letter keys.  Each of those symbols also served as shorthand commands for various things.  I remember that printing the heart symbol was obligatory at the beginning of most programs, since it was equivalent to a "clear screen" command.

But if you want even more keys for symbols, non-standard shift-key sequences, and overall high weirdness, you can't go wrong with the Space Cadet Keyboard:


Roman numerals!  Thumbs-up and thumbs-down keys!  Hyper, Super, and Meta?!?  I especially like the keys for set theory, partial differentiation, and infinity.  Hat tip to the great Ron Hale-Evans for introducing me to this one.

However, if you're really into the state of the art, I suggest you find an Optimus Maximus... in which each key contains a fully programmable little screen that you can change to any image you want...

This one made me think of the esoteric, customized keyboard (with a similar tactile look to it) that someone spent a lot of time in crafting for just one brief scene in the 1979 sci-fi movie Alien:


Note all the quasi-Buddhist Theosophical terms... Aum, Padme, and Hum all make an appearance.  Also Lingha and Yoni... as well as "Agaric Fly" next to "Trip."  (If you don't know, I ain't sayin.)  But what exactly is a "Druze Pile," and how does one get rid of "Shakti Excess?"  These keys might come in handy if you encounter Ascended Master Koot Hoomi on the seventh etheric plane, but I'm not sure how they helped Ripley blast a xenomorph out of the airlock.  See here for some additional exegesis of the fonts, buttons, and keyboards from Alien.

But anyway, now that we're firmly transported into the future, I can't help but also remember some other buttons and keypads out of my nostalgic sci-fi dreams...


Putting aside the obvious question (i.e., how would anyone remember what each button does if they're not labeled?), let me just point you to an amazing web page that tracks down the origins of every gol-dang button on the bridge of the original starship Enterprise.  Some were repurposed from existing electronic equipment, and some were made from pouring colored resin into ice trays.  Don't believe me on the latter, do you?  See some recent fan attempts to make some!


Another sci-fi TV show with interesting background graphical elements was 1978's Battlestar Galactica.  I loved all the quasi-Egyptoid and pseudo-Mormon symbolism, but in a post about buttons and keyboards, the closest thing I can think of is the joystick of the Colonial Viper ship...

The image on the left is the one seen most often... "fire" and "turbo" are obvious, and "IM" (inverse maneuver) was only used once: a rapid stop and reverse.  The image on the right was shown rarely -- possibly accidentally -- since it was the unaltered version. This prop really came from the cockpit of a Vietnam-era surveillance plane; it must have controlled the remote cameras on the outside of the aircraft.

Anyway, that's all for now.  If you're hungry for more stuff like this, there's a lot out there for the astute searcher.  There's also a surprising amount of interest in deconstructing the methods and meanings of sci-fi TV and movie "interfaces," too.  The blog that explored the Alien buttons and fonts also delved deeply into Kubrick's 2001 and a few other movies.  This blog had fascinating multi-post musings about the interfaces of Logan's Run, The Fifth Element, and quite a few others.

Lastly, I thought I'd show you the most sophisticated keyboard of all.  For the budding pirates in the audience, I give you the Corsair! 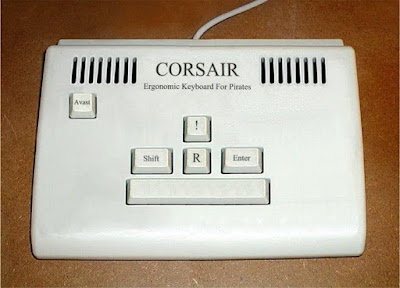