A September of Short Adventures: Intro 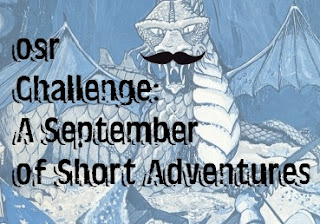 On Friday the September of Short Adventures (SoSA) will begin, and I (along with at least 13 awesome OSR bloggers) will be posting one "minimalist scenario" per day, except on Thursdays, that readers are free to use for any of their old-school tabletop role-playing needs. There are a few introductory and administrative things to say first...

This blog has been quiet lately because I've been preparing for the big fun of SoSA, but I wanted to not neglect the Glass Bead Game (GBG) side of things.

In January I posted about tension and release as a kind of "universal mechanic" for so many kinds of creative activities. If we ever do build a common symbolic language for a GBG, one could reasonably expect that tension and release would be somehow written into its DNA.

A few years ago, I began thinking about using the intervals of western tonal music as building blocks for a possible GBG language of tension and release. Over and over again, people describe the various intervals as having specific emotional connotations.  A perfect fifth is majestic, a minor third is sad, and so on. I was going to list some links, but there are just too many... just Google music, intervals, and emotions to see dozens. (German speakers, see also "Affektenlehre.")  The lists don't always match up exactly with one another, but they have many commonalities that I've encapsulated into the following table.

The emoticons were built up from the 4 categories listed by a music teacher named Dan Jones in an online PDF book: nice, nasty, neutral, and nostalgic. It's also interesting that Tufts University's Music Cognition Lab did a study where they found that people's speech patterns often used the intervals that correspond to specific emotions -- when speaking with those exact emotions. These associations may not be arbitrary conventions, but really worked into our own DNA!

For GBG design, the full set of 12 semitones may be too complicated to start with.  Most musicians pick a key in which to compose, where there are only 7 out of the 12 to play with. In rock and pop, sometimes the musicians just rely on "three chords (I, IV, V) and the truth!"  :-)

One thing I did was to take the 7 standard intervals of a key and try to create a list of generic "plot development" tropes, or generic narrative steps that occur in most stories. Here's what I came up with:

I.  EQUILIBRIUM:  Presentation of an equilibrium situation. At the beginning of a story, this equilibrium is likely "unstable," and at the end it may be "stable." Also, this chord can be used when new characters/themes enter or exit.

II.  AID:  Characters are helped, or are given information.  This aid propels characters closer to resolving tension.

III.  INTERLUDE:  A "non-functional" episode that neither increases nor decreases plot tension. Used for ambiance, comic relief, diversion. (Songs in musicals?  Asides to the audience?)

IV.  COMPLICATION:  Characters are hindered by something external, which raises tension.

VI.  EVALUATION:  Characters make a decision, formulate a desire or goal, or recognize the problem at hand.

VII.  EXPOSITION:  Revelation of information to the audience, via direct exposition, foreshadowing, flashback, tying up loose ends. Not explicitly functional from the characters' point of view, but needed for the audience to experience the story properly.

I didn't list the octave (VIII) since that's just a flavor of the tonic (I).  I used the emotional characters of musical cadences to help figure some of these out. For example...

V-I is an "authentic cadence" that corresponds to traditional ending of an action-driven story. The protagonist takes the final action, and wins!

II-V-I is a jazzy "turnaround cadence" that is a variant on the above. Han Solo flies in to help Luke survive the battle, and Luke then goes on to destroy the Death Star.

IV-I is a "plagal cadence" that is less satisfying than many others. In stories, it's probably the Deus ex Machina where everything is wrapped up with an unexpected bolt out of the blue.

V-VI is a "deceptive cadence" that really doesn't end the story. Scarlett O'Hara says "I'll never go hungry again!" and the music swells, but then there's a few more hours of movie left to watch!

What to do with these?  I certainly wasn't interested in plodding through dozens of stories and diagramming them.  (If anyone else is interested in doing the work, more power to ya!)  The big goal is to build new forms of art using these kinds of universal building blocks, but my stumbling block is always with the form that will take. Are we really talking about a completely new art form (which would require viewers/readers to be wholly re-trained in how they appreciate these things)? Or can we present these associations using standard media? I've already blathered about some of the tradeoffs one must think about, so I'll just stop here for now.
Posted by Cygnus at 8:00 PM 2 comments:

Sometimes a post does just what it says on the tin.... 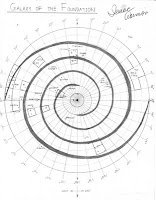 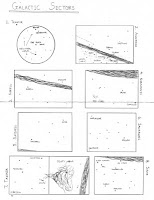 (Click on these for large 1 MB jpeg images)
I thought it might be fun to post them here, with a similar motivation as when I posted my Neverness FAQ; i.e., it might be helpful to someone as fodder to flesh out a sci-fi RPG campaign setting. When you've got the whole Milky Way Galaxy at your fingertips, the sky's the limit! :-)

I drew these maps in the early 1980s, and brought them with me to a local college at which Isaac Asimov was speaking and signing books. He happily signed my copy of Foundation's Edge, which was newly released, and I was elated that he signed this home-brewed map, too. For years I continued to think of these maps as the OFFICIAL maps of the Foundation trilogy's galaxy, because of the Good Doctor's signature on them. (Ha!)

I also got to ask him a question from the audience, but it was such a softball that I'm hesitant to tell the blogosphere what it was...

Okay, why not:  I asked him, out of all of his hundreds of novels, what his own favorite was. Hey, come on, I was like 13 or 14 and in awe of the dude.  His response was probably canned, but funny nonetheless: "My autobiography!"

Back to the present, I expected to find the Internet brimming with dozens of fan-made maps of the Foundation trilogy's Milky Way Galaxy.  But I only found one other, with captions in Thai script. (You'll have to scroll down a bit... the direct image link doesn't work.) There's also one that looks like a game board, but it wasn't meant as a literal map. Oh well... yet another instance in which I may just be the geekiest person in the room....
Posted by Cygnus at 8:35 AM 7 comments: 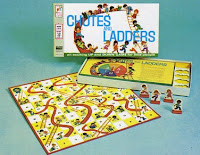 Okay, parents, you've all been there. Bedtime for the little one is 8:00, and at 7:50 comes "Just one more game!"  My son was really into Chutes and Ladders a few years ago, and for some reason this was the game of choice for sleep procrastination. But when the clock is ticking, the dice seem to conspire to make the game go on... and on... and on...

So, how many turns should one expect a game to last? Theoretically, this game could go on forever, but statistically one should expect a finite end nearly all of the time. Not surprisingly, people have thought about this problem... quite a bit in fact. (See also discussion of the mathematics of the game in the Wikipedia article linked above.)  My fellow geeks seem to agree with my own analysis that the mean number of turns that a player should expect is about 39.5, and the median is about 33.

But not so fast!  All of the calculations that I've seen assume (rightly) that a player of Chutes and Ladders doesn't affect the actions of the other players at all.  Thus, the computer programs and mathematical equations just tend to simulate a single player, from his or her start in space 1 to the end in space 100. But for two or more players, only ONE of them will follow this single-player simulation all the way to the bitter end.  The others will stop when the winning player wins, and this skews the distribution!  In other words, when you have more players, you have more chances of ending the game with a low number of turns!

So I fired up the old random number generators, and wrote some code in IDL to simulate a few hundred thousand games... Here are the histograms for different numbers of players: 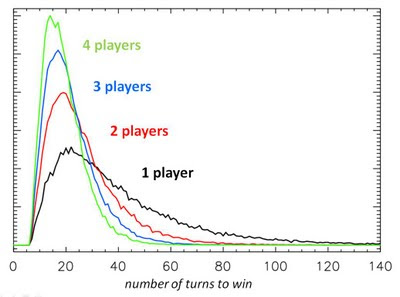 The y-axis shows the relative probability of winning the game in the number of turns shown on the x-axis. The mean number of turns for a 1 player game is 39.7, for 2 players it's 26.5, for 3 players it's 21.8, and for 4 players it's 19.3. Another interesting change is the eating away of the one-player "long tail" to give multiple players a much more compact distribution. I'm sure that one could have modeled these Poisson-like distributions without crunching through millions of simulated moves, but computers just make doing the latter so easy! :-)

I also played around with a common house rule that we implemented when our son was very young: once you get into the final row (spaces 91 to 100), you're home free and the chutes don't count. For the one-player game, using this rule reduces the mean number of turns from 39.7 to 31.6, but the median goes down only from 33 to 28.  Not a huge time-saver, I suppose, but it may reduce player crankiness!

(Of course, adding more players isn't necessarily all peaches and cream!  More players may also mean more arguments about who gets which counter, who spins the spinner properly, who goes next, etc... so caveat emptor!)

Wow... when I started thinking about doing a post on Chutes and Ladders, I was intending to talk mainly about its origins as an ancient Indian teaching tool for the concepts of karma and reincarnation, and maybe about Deepak Chopra's recent morphing of the idea into a weird video game. As a kid, I think I may have encountered its Tibetan variety even before I'd ever played the Hasbro version!  :-)
Posted by Cygnus at 6:43 AM No comments: