Finally... Here's the third part of my ongoing review of the 33 stories in Harlan Ellison's 1967 anthology Dangerous Visions.  In part 1, I reviewed the first eleven stories, and in part 2, the second eleven.  Some stats and summary at the bottom. 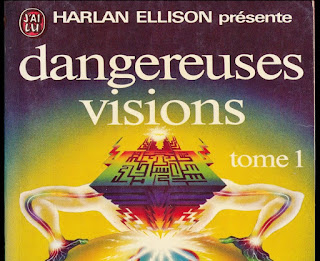 What do you get when you mix a depressing, dystopian future with a bright-eyed, well-drawn protagonist?  I'm not quite sure.  At just 6 pages, there was nowhere near enough time or space to really find out.  What this story did do was remind me that I truly ought to read Octavia Butler's Parable series.  I've been remiss.  This story, though?  SKIP.

Okay, this may be another cautionary ("if this goes on...") type of tale, similar to a few others in this collection, but it was really well done.  Seriously creepy vibe, conveyed simply and straightforwardly.  It makes you feel for the fate of the protagonists, and it stings.  Why?  In the 1960s, they were a bit vague about how "The Machine" could become so firmly ensconced in our lives.  Now, we have smartphones, the internet, streaming everything, and home devices that you converse with.  It's here.  (Also, I read this on a plane, where you definitely get the sense they're trying to lull the passengers into a similar zombie-like state as the "Musselmen" in this story.)  WOW.


25. "Encounter with a Hick" by Jonathan Brand

Let's joke about that big taboo called "religion," why don't we.  This ultra-short story has the similar genetics of mockery as the ones in this collection from Lester del Rey and Damon Knight (which I loathed), and in some ways, this one is just as shallow and silly.  I won't be pulling out comparisons to Voltaire or anything.  If this was published elsewhere, I'd guess it would've been in a like-minded venue of the time, say Playboy or National Lampoon.

The voice of the hippie-ish first-person narrator held my interest for the duration.  His patter (in the form of a transcribed legal deposition) was zippy and even a bit lyrical.  Still led to a stupid punch line, but OKAY.


26. "From the Government Printing Office" by Kris Neville

Despite the clever conceit -- a jaded grown-up voice narrating the thoughts of a toddler -- I can't find much to redeem this story.  It's another one that extrapolates a nasty, brutish future from one slightly whimsical and inconsequential concept.  Oooh... "Doctor Spock, but evil..."  SKIP.

Cute concept.  I'd never read Lafferty before, but the prose reminded me a bit of Harlan Ellison's (which is a decided compliment).  Just a bit politically incorrect by today's standards, but not a hugely "dangerous vision."  OKAY.

Very well written.  About as spooky and folksy as Leiber's "Gonna Roll the Bones" earlier in this collection, but in a very different setting (swap out America for England).  However, this story also suffers from that same bleak malady of British pessimism that suffuses Pink Floyd's Time, Rick Priestly's Warhammer, and the absurdist ending to Monty Python and the Holy Grail.  Not my thing at all, but still so nicely wrought, craft-wise.  OKAY.

Silly silly silly.  Semi-interesting, possibly, as an example of a 1950s aesthetic one could call "chromepunk" (youngsters of today: visualize the pre-bomb Fallout universe?).  But the story itself was just a thin veneer for more simplistic religion-bashing.  Zero nuance or subtlety.  SKIP.


30. "Test to Destruction" by Keith Laumer

Interesting combination of a hard-drivin' rock-em sock-em adventure with an old fable that tells us how absolute power corrupts absolutely.  With a dash of alien hive-mind telepathy, for flavor.  Not really very deep, but it holds the attention.  OKAY.

Entertaining O-Henry-ish tale of the "be careful what you wish for" variety.  Not very science fictional, but somewhat phantasmagorical and solidly a product of the sixties, man.  OKAY.

This one was masterfully written.  A bit silly in its own way, too.  The conceit is clear in the first couple of paragraphs.  I don't need to go into the details, but I will say that it forced me to think about those creepy online speculations about the pre-history of the universe occupied by Lightning McQueen and Tow Mater.

I was a bit surprised by how "straightly" Zelazny played it all.  He didn't feel the need to drive home any explicit Moral Of The Story™.  However, I couldn't really find much of an implicit meaning or message, either.  I'm not saying every story needs that, but in this particular case I think it was reduced in stature by lacking some deeper why of it all.  It's probably regarded as a sci-fi classic in some circles, but I can't see much beyond the tricksiness of it.  Ultimately, just OKAY.

All righty.  FINALLY, not since perhaps the fourth story in this collection, here is a story truly worthy of being in this anthology.  I'm actually not going to say anything about the story itself, except that it makes wild extrapolations about the weirdness of humanity that really aren't that wild or weird.  I've written some purple praise about Delany in the past, and even though since that time I've heard about some other opinions of his with which I vehemently disagree, I still think his writing is amazing.  WOW.

I didn't really expect to be so negative about the majority of the stories in this collection, and I searched for good things to say whenever I could.  It's probably just obvious that 53 years is a long time, and the norms and tastes swirling around the concept of a "dangerous vision" have shifted quite a bit.  I'm still very glad I did this, and there are a few authors that I'll be seeking out more from.

Then hopefully I'll be catching up on some other topics relevant to this blog, which hit an all-time low number of posts in 2019.  I hope to bounce back those numbers a bit, at least!  ;-)
Posted by Cygnus at 8:39 PM 4 comments: