Here's the sequel to the blockbuster prequel...  3 maps down, 3 to go.

In my 2013 April A-Z post on author Somtow Sucharitkul, I mentioned his alternate take on a Roman empire that conquered (or tried to conquer) the New World.  His original "Aquila" short stories were published in Asimov's Science Fiction Magazine in the 1980s, then later packaged into novels.  However, the novels didn't contain this gem of a map from the April 1982 issue of Asimov's!


I had to dig through a few boxes to find this one, but once I realized it wasn't online anywhere (at least anywhere easily searchable), I was determined to rescue and digitize it.  The map credit at lower left reads "J. R. Odbert."  I think most of the Latin puns are taken right out of Somtow's story, but I wouldn't put it past a crafty cartographer to insert more.  As I remember, a lot of the story takes place in and around the city of Caesarea, which I think is sitting where Omaha, Nebraska ought to be.  This is not your paterfamilias' Terra Nova!

Several times on this blog I've waxed on about my love of David Zindell's awesome first novel Neverness and its sequels.  I even wrote a fannish Travel Guide to his intricate and uplifting constructed universe -- which I heartily recommend to anyone about to read the books for the first time.  No spoilers in there!  Much of the action takes place on the largest island on a chilly planet named Icefall.  Zindell didn't include a map of the place, but I did my best to piece together something that could help readers navigate around...

I think my MS Office art skillz have matured a bit since first making this in 2011, but it does the job.  I do need to note that the TV show Family Matters didn't exist when Zindell came up with the name of that southern-most mountain, but I wonder if he found it a minor source of embarrassment when writing the sequels...

Okay (gulp), the final map today is something I drew back in the 1980s.  When my friends and I played D&D, we took turns running the game, and we each took control of a continent on a larger world.  We blithely ignored the realities of such a setup, and each new adventure usually started with something like "As you're disembarking from the ship from Brian's continent, you see...."

Anyway, here's mine.  I did my best to enhance the image, but the original is very lightly-drawn pencil on notebook paper... 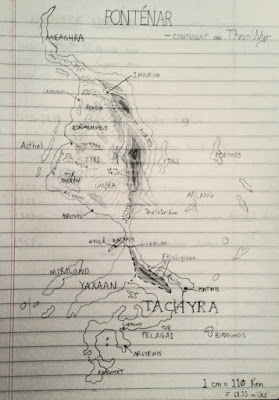 I suppose there's a symmetry between my "Ponténar" with the mythical "Poseidonis" that I talked about in the previous post.  I originally designed the coastlines by tracing over a map of the Mid-Atlantic Ridge, and imagined a whole Greek-themed Atlantis-ish empire in the southern part.  I eventually added some extra land up in the north, because my actual contour of the Mid-Atlantic Ridge just didn't have enough surface area for everything I wanted to squeeze in.

Unfortunately, I never got to tell the stories of many of the places on this map.  Invorum up north was a hidden stronghold of powerful wizards.  The unfortunate dwarfs of Felak-Gizan were enslaved by the Tachyran empire, and were soon going to get their revenge.  See that island in the bay between Tachyra and Yaxaan?  The volcano on that sucker was going to cause trouble for hundreds of miles around.

As I look at the place names in my map, I also see a litany of morphed names of people that meant a lot to me back then.  I'm not going to tell you who Meaghra, Rendin, Gyule, and Kalapis are named after, but each one gives me a lump in the throat.

Ah, well.  I think counter-factual maps like these are tempting vessels for us to pour in our weird, wild thoughts & dreams... and mix them up in ways that sometimes surprise even the mapmaker.

Psst... hey... want to see some weird maps?  I've done this once before, and now I've got six more to share... this time including a few of my own creations.  But I realize that my blog posts tend to be loooong... so I'll split it up.  Just three maps here, and three to come later.

Back in the summer, I posted about my childhood obsession with UFO pulp magazines of the 1970s.  "Weird, wild stuff," to paraphrase Johnny Carson.  Looking back through them, I did find one interesting alt-history-ish map of an antediluvian world that hosted the lost continent of Atlantis, as well as... the land of Oz...?


The article, from Ancient Astronauts Special (Summer 1978), was called "Atlantis Reawakened."  I can't quite find an author byline for the article, but the map contains an artist's signature on the lower left that I can't quite make out.  The story talked about Dogma, the doomed daughter of King Chronos of Poseidonis (also doomed).  Concerning the map itself, I'm a little scared to ask why northern Africa was called "Teutonia," but I'm fascinated by them placing the "Land of Canaan" up near Hudson Bay.  Still, calling Atlantis "Poseidonis" is quite poetic, don't you think?

An interesting bookend to the above is Jack Kirby's future world of Kamandi.  I didn't read those comics back in the 1970s... nor have I read them since... but they seem like a crazy ride:

On the heels of the success of the Planet of the Apes franchise, DC Comics was looking for a similar post-apocalyptic story with humans in the beleaguered minority.  But one simply doesn't give Jack Kirby the job of doing a knock-off story.  What he gave them was orders of magnitude weirder.  I wonder if this far-future world was an influence on the world of "Ooo" in Pendleton Ward's Adventure Time.

Speaking of DC comics, I clearly remember this map of Superman's home planet of Krypton from the comics of the Silver Age: 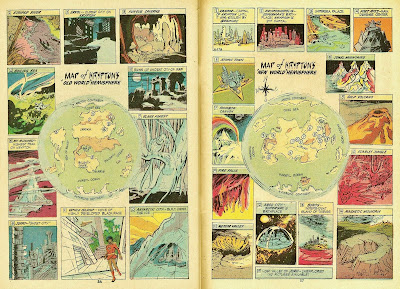 I simply do not accept any more recent revision of the planet Krypton that doesn't contain the Gold Volcano, the Jewel Mountains, or the Glass Forest.