The Great Big Glass Bead Game (GBGBG) plays on.  Please see the first two moves here and here, and apologies for being a bit tardy with my anticipated posting schedule of one move per week.  I also feel a tinge of regret for not starting this whole schmegegge a few weeks earlier, so I could've synchronized this move more closely with the Christmas season... 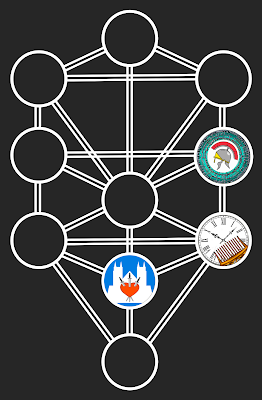 The new image, placed in the lower-right corner and connected to the previous two moves, represents the 1905 short story The Gift of the Magi, by O. Henry.  Even if you've never read it (which I hadn't before now), you've probably seen its core plot played out in other books, movies, or TV shows.  There's a poor couple who love each other more than anything.  The husband sells his gold pocketwatch to buy his wife some stylish hair combs.  The wife cuts her long hair and sells it to buy him a special chain for his watch.  Irony -- especially the kind that tiptoed over the tightrope between comedy and tragedy -- was what paid the bills for Ol' Henry.

I suppose I'd never really wondered why this story had this particular name, but in the final paragraph, it's made clear.  One can attribute the invention of the Christmas present to those three Wise Men of the East.  Henry layed it on a bit thick, but his last few sentences do deserve to be better known:

And here I have lamely related to you the uneventful chronicle of two foolish children in a flat who most unwisely sacrificed for each other the greatest treasures of their house. But in a last word to the wise of these days let it be said that of all who give gifts these two were the wisest. Of all who give and receive gifts, such as they are wisest. Everywhere they are wisest. They are the magi.

Okay, so how does this relate to the other ideas placed on the board earlier? Linking Henry to Hozier is pretty straightforward, I think... self-abnegation for the beloved is a clear and common thread.  Likewise Rory the Roman.  He sacrificed 2000 years for Amy, and it should be noted that she sacrificed a lot for him, too (see: The Girl Who Waited).

There's one other tenuous, but sparkly, link.  Those two millennia in which Rory waited took place in an alternate timeline.  One key difference with our own was that there were no stars in the night sky, because the universe was in kind of a slow-motion collapse.  But the collective unconscious of humanity held on to some shred of memory of the stars, since the existence of underground "Star Cults" was mentioned briefly in hushed tones.  I can't help but think of the Magi's

which symbolized so much about this underground cult that started growing, right around the time Rory began standing guard.