Holy frijoles, I can't believe it's been a month to the day since I last posted.  Getting our house packed up for our upcoming move has taken up nearly all of my free time... and we still don't know precisely where we'll be hanging out the "Cygnus Family" shingle come January.

I got the urge to post because, wouldn't'cha know it, fate picks now for the following.  No more than 36 hours ago, I got the first glimmer of an idea to write a story -- part sci-fi, part sci-fact, part semi-autobio.  I've done short form fiction on the blog before (urp), but with emphasis on the short.  This thing is likely to end up being longer than a typical blog post; it may also blow past the canonical 7,500 word boundary between "short story" and "novelette."

I've already amassed something like 2,000 words on the outline alone.  It won't let me alone.

Ah, we'll see if this momentum continues.  But now, to commemorate the impending night of the rending of the veil between worlds, let me just point you to another story, this one completely wordless, that I think captures the heart of the All Hallows season nicely.  With cute kitties!  :-) 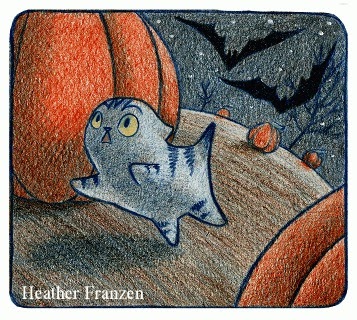