Lord Chronos is cruel, it's true. I've been spending pretty much all of my free time (non work, non home maintenance, non child care, ...) on my Neverness FAQ and on the DIY Dungeon project, so no posts in over a week... :-(

In consolation, please view some Gallifrey-approved time wasters, including...

A version of eHarmony for superheroes

What Leonard Nimoy does on his day off

Some surprisingly insightful thoughts about why Batman doesn't kill

About a jillion fascinating blog articles about IT startup companies

And of course, a list of 50 other online time wasters!
Posted by Cygnus at 11:16 AM No comments:

The ONLY way that I can get through watching Episode III is to remember this quote from Harry Knowles:


Obi Wan never takes Anakin out for drinks and just levels with him.  Sits him down and explains fascist totalitarianism.  He doesn't explain why sacrificing the most marginal freedoms to create a false sense of security enables those taking on those additional powers to create a greater evil than that which they fear.  Hell, nobody really explains to Anakin why Democracy is better than Absolute Rule.  Instead it is all this, "Search your feelings" bullshit.  Turn to your ancient religion.  This is why ultimately Luke Skywalker kicks ass.  Because he doesn't have all this dogmatic bullshit.  Because he's got a buddy like Han Solo that'd be willing to bust ass across the galaxy to save his ass.  Somebody that has his back.  FRIENDS!  Because when the Sith hits the fan, it's the love of your friends that'll help you push through and kick ass.  Because Luke believes in twin sunsets, the good guys and saving his dad. 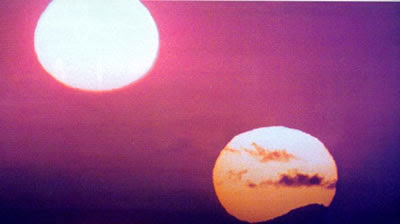 Posted by Cygnus at 2:14 PM No comments:

This isn't quite a full-on review of David Zindell's 1988 novel Neverness. It's just a brief love-haiku for this geeky wonder of a book.  Think of it as one part Greg Egan's transhumanism, mixed with one part Olaf Stapledon's aeon-spanning cosmic vision, blended with a soupçon of a school-days coming-of-age tale with burgeoning superpowers (dare I say J. K. Rowling?). Add to that a glimmer of Gene Wolfe's sense of wordplay -- but I haven't yet read Wolfe; I yoinked that last one from the longer review quoted below.

I became enchanted with this story, and Zindell's imagined future universe, when I encountered this book in the late 1990s. I found it via a review by Orson Scott Card in F&SF, where he raved about it and said:

How could I NOT seek it out after that kind of praise? Although it gets a little rambly in places, I do think it lives up to the praise.  (The sequels... maybe not so much, but that's a story for another day...)  One of the reasons I'm highlighting it on this gaming-type blog is that Zindell structures much of the story around the "Order of Mystic Mathematicians and Other Seekers of the Ineffable Flame," a learned school/society that is clearly modelled after Hermann Hesse's Castalia from The Glass Bead Game. One has to get to the second book in the series (The Broken God) to see the full parallels drawn between Hesse's GBG players and Zindell's holists and notationists, but the vibe is there in the first book.

Unfortunately, Neverness didn't take off into the stratosphere of speculative fiction like some thought it would, and there's precious little ancillary geekdom about it on the web. Not for long! I'm planning for my second PDF project to be a kind of Neverness FAQ, a spoiler-free "travel guide" to some of the things that populate Zindell's universe. I've got a draft from several years ago that outlines some aspects of geography, the calendar, and the professions of the Order. It's just something that I really enjoyed putting together, and it will be nice to see it finished.  Fingers crossed!  :-)
Posted by Cygnus at 8:08 PM 3 comments:

One-page PDF for Contests of Skill

I've begun to experiment with using Google Docs to host PDF files. I've created a one-page PDF version of the Contests of Skill mini-game that I posted about here.  This thing seemed particularly well-suited for a more graphical display than a blog post will allow, so I had some fun with the formatting... 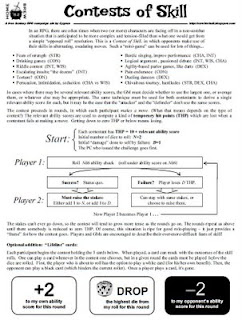 The link to the Google Docs page for this file (from which you can browse or download it), is HERE.

Posted by Cygnus at 9:08 AM No comments:

Al over at Beyond the Black Gate has a fun post about Thor's hammer Mjolnir and the powers that accrued to it over years of Marvel comics stories.  For me, it's funny that the movie Thor is coming out this year, when my son is 9.  When I was that same age, in 1976, I had a serious jones for Norse mythology -- both the "real" kind and the Lee/Kirby variety -- and I staged a play in my 4th grade classroom based on the death of Balder. For that play, my Dad made me my own wooden Mjolnir... 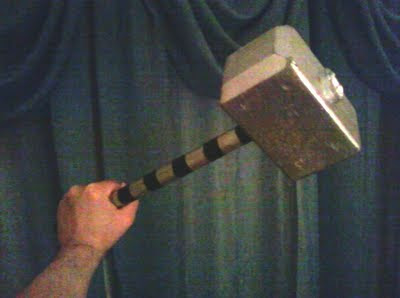 Needless to say my geekfest of a play didn't go over that well, but the hammer was a definite hit! I was pleased to find this uru talisman the last time we visited my parents, and I'm still grateful to my Dad after all these years for giving me something to swing in the back yard while yelling "For Odin! For Asgaaaard!"
Posted by Cygnus at 8:35 PM 2 comments:

My Homebrew '82 RPG will make some use of ability score checks (i.e., skill rolls) to figure out if a character can do something or not. This is usually for things that would be difficult to role-play at the table, and which have definitive succeed-or-fail outcomes. Many other RPGs also use "opposed rolls," in which two characters use their skills directly against one another. I'm not a huge fan of opposed rolls -- mainly because I've never seen a situation for which they seem like a good fit. (Aside of combat of course -- that's a horse of a different color!)

However, there are some times when two or more characters are facing off in a non-combat situation that's a little more involved and tension-filled than a single opposed roll would allow. You know the classic examples...
What we're talking about are Contests of Skill, in which the opponents make use of their skills in alternating, escalating moves.  The very definition of a "mini-game," perhaps...
Here's how it works.

Avoiding the Vale of Weirdness

In the process of preparing a post about an idea for old-school "contests of skill" in Homebrew '82, I found something quite fascinating.  But not in a good way, I'm sorry to say! :-)

I learned a bit more about "skill challenges" in the 3rd and 4th editions of D&D. I guess it wasn't surprising that these appear to be as rigidly programmed as the overall adventures themselves seem to be. But what shocked me was that even the knowledge held by the player characters can also be similarly programmed! How else can one explain the strange ways that PCs minds are altered by the outcomes of the skill challenges?  Let me paraphrase a few example outcomes from a chart on a 4e forum thread, in which a PC is rolling dice to see how well he or she haggles with a merchant:
Am I misunderstanding what is going on in these charts? The most straightforward explanation can only be that PCs in "new school" RPGs tend never to build up a rich history of experience in their campaign setting, so these new pieces of information just have to be occasionally "downloaded" into their heads by the DM.

Again, I ask: Really?  Greg implied that there was additional context in that podcast that explained that the speaker wasn't truly advocating "railroading" the players, but I haven't listened to the thing. I just have to say this feels just as wrong to me as suddenly telling a player that the character now knows a key fact that didn't exist a second ago. Having the GM micro-manage reality to his degree can ruin the player's sense of cause and effect -- i.e., it can easily lead to an "Alice in Wonderland" effect where all knowledge is up for grabs and nothing really matters. It also can ruin the sense of earned accomplishment that players feel after struggling to get to know their world. Yeah, I'm with Alexis on this one:


"The DM and his or her world must not act as a impositional dictator over the player's actions.  The world must be a learning annex, allowing for player improvement and development.  The player must know why things are happening.  The player must be able to apply his or her experience of the real world, and get results back from the fantasy world that make sense.  One can only go so far into the Vale of Weirdness."