The blog's been a bit quiet lately... not so much because of lack of things to say, but mostly just work & life doing their thing.  I am mulling over long-term plans for the 2018 April A-Z Challenge.  If it happens, some fraction of it will be a serialization of the story that I started writing about 3 years ago and haven't talked about much since.

Focusing on the here and now, I've also (impulsively) decided to give tumblr a try.  "Another blog?" you may say, "You can't even keep up with one, dude!"  Well, the tumblr format is a little more "micro" than what I'm used to around here.  For some reason, I associate this blog with archiving my long-form deep thoughts.  Many ideas come and go because they can't be expanded into something that I think is servitorludi-worthy.  Tumblr is also more about quick reblogs and memes.  Those can still be deep and impactful, but there's less of a mental cover-charge (at least for me).  Thus, let me introduce My Own Weird Way... 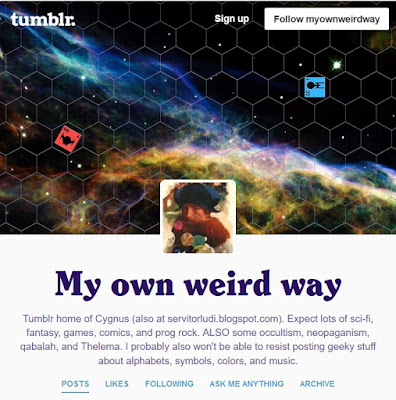 Before anybody asks...
So although I may occasionally do tumblr things about the main topics of this blog (Glass Bead Games & Role Playing Games), I'm planning on being much more free-range with my fannish & esoteric interests.

In other words, I have no idea what will show up there, but it's going to be fun & interesting!
Posted by Cygnus at 9:41 AM 5 comments: