Well now, it's been a freaky end to a freaky year.  Today was the day the movers delivered (most) of our stuff to our new place in the Rockies.  The word "most" in the last sentence was the source of some of the freakiness, but all is well.

I'm reminded of the Rankin-Bass TV special Rudolph's Shiny New Year.  In that story, once a year ends, its elderly embodiment (who starts out as a Baby New Year) goes into retirement on his or her own private island.  I'm not sure I'd want an everlasting island to commemorate all the drama and stress of my own 2014, but it seems to be leading to somewhere good for my family and me.  So maybe it ought to be cherished, sleepless nights and all. 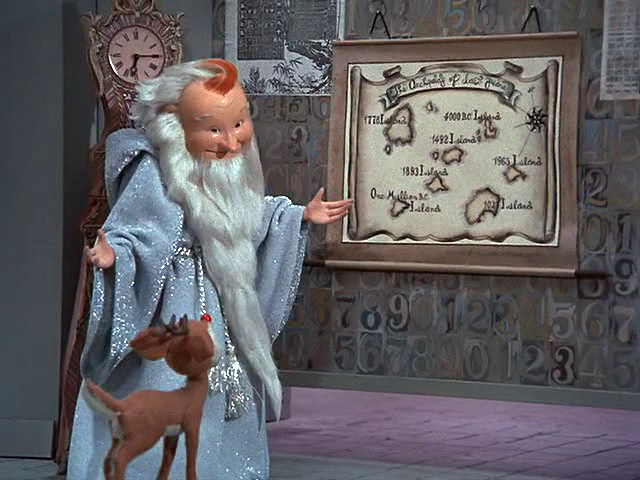 For this blog, 2014 saw a bit of a slow-down.  There were only 35-ish posts, which is a bit less than half my average of about 80 for each of the previous three years.  Still, I was able to participate in some extremely fun blog-hops, including Squid's Cephalopod Coffeehouse, the nostalgia-filled Then and Now (in which we revisited old faves to see how they held up), and our own Songs of Summer.

I finally managed to work up a full play-by-play example of a "Glass Bead Game."  It was based loosely around Beethoven's 9th symphony, and it used Charles Cameron's fantastically easy-to-grok "Hipbone" format.  Here's a run-down of the 10 moves in that game:
On the fantasy role-playing game front, I didn't get to work much on Homebrew '82, my own fantasy of what this kind of game should be like.  However, I did make some progress in figuring out how I'd run such a game... the making of detailed maps turned out to be not too terrible a task... and I realized that much of the day-to-day world management expected of a Dungeon Master should be outsourced to some very personalized software.

For 2015, the big decision I have in front of me is whether or not to forge ahead with the infamous April A-Z Challenge.  In the previous post, I mused about some ideas for it that came shooting into my brain unbidden last month.  I'll probably wait a bit, to see how drained I get by the first few weeks and months of my new job.  :-)  There's also that fiction piece that's been beckoning to me since Halloween.  Whatever happens, I think it's going to be an exciting 12 months!

Have a Hap-Hap-Happy New Year, everyone!
Posted by Cygnus at 8:31 PM 5 comments: