[This is the 11th of my April A-Z Challenge series of posts on Symbols, Glyphs, and Sigils. Each day I'll try to include some material that old-school role-playing gamers will find useful, but I can't guarantee that there won't also just be a few posts filled with weirdness for the sake of weirdness....]

Have I talked much about the Hermetic Order of the Golden Dawn on this blog before?  I've probably mentioned it, but I'm sure I haven't successfully conveyed its sheer awesomeness. It was a real-life British occult society that trained some major cultural figures of the early 20th century, and inspired many modern day artists and magi (like Alan Moore) with its tradition of magic and eclecticism.  It also produced some pretty psychedelic imagery, such as this shot of a modern reconstruction of its sooper-secret Inner Order Vault of the Adepti: 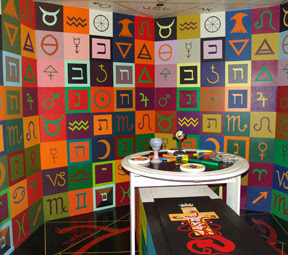 For today's symbol, there are literally hundreds to choose from, just in the above image alone!  But instead I'd like to talk about a coded set of passwords from the GD's very first initiation ritual.  A new candidate who wants to become a GD Neophyte is put through an elaborate ritual that symbolically shows how the Order will take them from Darkness to Light.  The initiate wears a "hoodwink" over his or her head through most of the ritual, but at its climax the hoodwink is removed and the initiate sees the Egyptian-themed temple for the first time, and sees the garishly robed three main officers in a triangle surrounding him or her.  At that key moment, they say "We receive thee into the Order of the Golden Dawn," and they take turns intoning mystic words:

The Hegemon says: LIGHT
The Hierophant says: IN

The Egyptian phrase "Khabs Am Pekht" is said to mean the same thing as the Greek phrase "Konx om Pax," and they're both supposed to mean "Light in Extension."  (The Greek phrase is from the Eleusinian Mysteries, and I don't think the historians have yet figured out what it really means...)

"Where are the symbols?" you may ask.  Well, later, when the initiate advances a few more grades, he or she is given documents that explain the esoteric significance of the Neophyte admission formula, and that document gives the Egyptian hieroglyphs and Coptic transliteration of the "Khabs Am Pekht" part:

(I'm actually not 100% sure that I'm allowed to present the scan of these hieroglyphs above.  For some reason, all published versions of this document don't show it.  The above comes from a scan of a hand-copied version from the 1890s that was sent to me by a private Golden Dawn scholar.  Hopefully showing just a tiny snippet of that scan isn't verboten...)

To me, what's most interesting about it is that it's just... not... quite... right.  Many of the correspondences between Egyptian and Coptic are straight outta Champollion, but others, like the star and cross for "a" and that recumbent dude at the end, just don't mean what they think they mean.  We're left wondering what kind of convoluted game of "Telephone" this drawing went through to get to where it is...

In fact, the belief that "Khabs" meant some kind of bright, shining light eventually led Aleister Crowley to make the word a key concept in his religion of Thelema.  Some argue that this distortion of ancient Egyptian concepts somehow invalidates the modern-day usefulness of Thelema as a philosophy or world-view, but I think that it's hardly any different from the millennia of borrowing and syncretism that preceded it in every other religion...

Anyway, there are many possible ways to relate the above whirlwind of ideas to role-playing games.  Back in the 1990s, there was a pretty cool Call of Cthulhu Supplement about the Golden Dawn that gives 1890s-era CoC Investigators whole new worlds of occult creepiness to explore.  Even without that, GMs could make use of the infamous ciphers that were used to encode the first version of the GD's ceremonies.  From some of the images shown in the above cipher link, I think Trithemius would have loved the AD&D Combat Computer!
Posted by Cygnus at 9:59 AM