H is for the Helm of Awe

[This is the 8th of my April A-Z Challenge series of posts on Symbols, Glyphs, and Sigils. Each day I'll try to include some material that old-school role-playing gamers will find useful, but I can't guarantee that there won't also just be a few posts filled with weirdness for the sake of weirdness....] 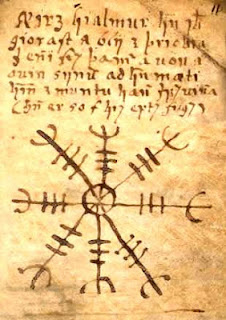 The Helm of Awe, or Ægishjálmr, was a magical symbol worn by Norse and Icelandic warriors for protection in battle and to invoke fear in one's enemies. How precisely it was to be "worn" varies a bit with time and place -- sometimes it's drawn on the forehead, sometimes tattooed on the body, and sometimes it's meant to represent an actual helmet (as in Wagner's Tarnhelm). The web is full of modern-day drawings and tattoos, but I wanted to show (at right) a scan of a page from an actual Icelandic grimoire that highlights the original symbol.

There are a lot of interesting things about Icelandic symbol magic that I could talk about, but you can get a feel for a lot of it from the above links.  One thing that particularly jumped off the screen at me, when I first saw the Helm of Awe, is its eerie similarity to magical symbols drawn centuries later, half a world away... Have a look at a Haitian Voudon symbol (Veve) for the imposing Baron Samedi: 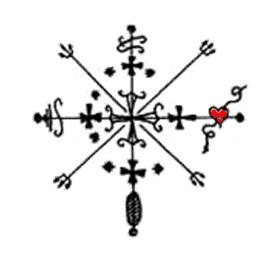 Like medieval European magic circles (and Tibetan sand mandalas?), these symbols are created by ritually strewing various powders on the ground in the appropriate patterns.  However, Baron Samedi's sphere of influence is kind of the flip side of what one would want from the Helm of Awe.  One invokes survival with the Helm... but the Baron is the one who accepts people into the realm of the dead.  Well, maybe this is just the mirror image of the same idea.  Soldiers going into battle often must meditate on the idea that "this may be a good day to die."

In RPGs, there have been some products that describe a kind of "Tattoo Magic."  See a Pathfinder source book, as well as a page of Rolemaster house rules.  Borderline creepy that they are, they still don't seem to approach the religious aspect of both the Helm and the Veve.  Perhaps it's the CLERICS that should get these kinds of powers when they choose to mark themselves with the symbols of their gods.  Of course, if it's just drawn on (and not permanently tattooed) then it wouldn't impart as strong a bonus.  And woe to the cleric for whom the drawn-on symbol accidentally rubs off!
Posted by Cygnus at 7:42 AM