H is for Hacktivism

Over the last few decades, computers have changed the world.  Later in this challenge I'll have at least one more post about how they might continue to change our lives in the fuuuuuture, but for now I'd just like to look back.

The highly individualistic "hacker ethic" is something that's attracted manifesto writers since the early 1980s.  Combine a love of sharing and openness with pie-in-the-sky dreams about changing the world, and you've got a perfect storm of virtual optimism.  Back in 2013, I discovered some early manifestos that took the form of magazine ads.  Another early codification of this ethic was set down in writing in Steven Levy's 1984 book Hackers: Heroes of the Computer Revolution:
Right about the same time, Richard Stallman (sometimes called the last of the old-school hackers) began the GNU project... 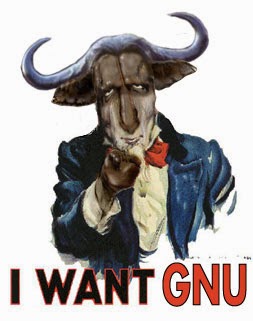 ...which of course came along with its own honest to goodness manifesto.  Stallman's purpose was to use grass-roots collaboration to create quality free software that wasn't beholden to corporate interests:


I consider that the Golden Rule requires that if I like a program I must share it with other people who like it. Software sellers want to divide the users and conquer them, making each user agree not to share with others. I refuse to break solidarity with other users in this way. I cannot in good conscience sign a nondisclosure agreement or a software license agreement.


In the long run, making programs free is a step toward the postscarcity world, where nobody will have to work very hard just to make a living. People will be free to devote themselves to activities that are fun, such as programming, after spending the necessary ten hours a week on required tasks such as legislation, family counseling, robot repair and asteroid prospecting. [...] We have already greatly reduced the amount of work that the whole society must do for its actual productivity, but only a little of this has translated itself into leisure for workers because much nonproductive activity is required to accompany productive activity. The main causes of this are bureaucracy and isometric struggles against competition. Free software will greatly reduce these drains in the area of software production. We must do this, in order for technical gains in productivity to translate into less work for us.

In subsequent years, Stallman came to realize that people came to have different expectations of the word "free," so some clarifications had to be made to the manifesto.


When we call software “free,” we mean that it respects the users' essential freedoms: the freedom to run it, to study and change it, and to redistribute copies with or without changes. This is a matter of freedom, not price, so think of “free speech,” not “free beer.”

See more details here.  I'm not sure I understand all the nuances.

Of course, a wild west mentality can produce black-hatted villains alongside the white-hatted heroes.  We're all familiar with the bad stuff that can be done with computers.  However, dipping our toes back in the original wellsprings of idealism can remind us why the wildness was (hopefully!) worth it.