In looking through the last few topics on the D&D 30-day challenge, I find myself either shrugging my shoulders at things that don't apply to the version I grew up with, or scratching my head wondering how my answers would differ from what I already said in some of the earlier questions.  Thus, I've made the executive decision to declare the challenge over and done with, and replace it with something that I always found much more inspiring for my RPG adventures...

I suppose one can't get around the need to start with Tolkien.  A lot of people talk about how he supposedly wrote The Lord of the Rings in order to weave a story around the fictional languages that he spent decades crafting.  But he also created a visual world, filled with forbidding mountains, murky forests, and eerie swamps.  He also envisioned how that world changed -- sometimes violently -- over thousands of years.

The map above (found on a forum thread) shows a spooky before-and-after overlay of what happened to the elven lands of Beleriand when it became collateral damage in an epic war between good and evil spirits.  Still, who knows what the future will hold?  The elf queen Galadriel once talked about what may happen when "...the lands that lie under the wave are lifted up again."

Closer to the modern age -- but still existing sideways in the land of imagination -- are the fictional cities of DC comics... 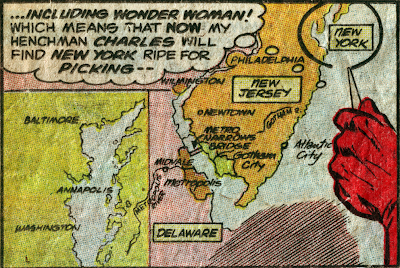 Don't worry about the thought balloon above; just have a squint at the details on that map.  Unlike the heroes of Marvel Comics, who tended to hang out in New York City -- where the writers lived -- the DC heroes often inhabited fictional cities of their own.  Everyone knows that Superman lives in Metropolis and Batman lives in Gotham City.  There were dozens of others, too.  To their credit, DC has artfully maintained the fiction that these places are not just silly pseudonyms for the Big Apple for many decades.

(Some writers took inspiration from other places... Superman's creators Siegel and Shuster modeled the Daily Planet building after a real newspaper tower in their home city of Toronto.)

The map above, from a 1978 newspaper strip, shows that shiny Metropolis is "really" just east of Dover, Delaware, and grim Gotham is just across the river near Fairfield Township, New Jersey.  Who knew?  :-)

Maybe we should move closer to "reality?" 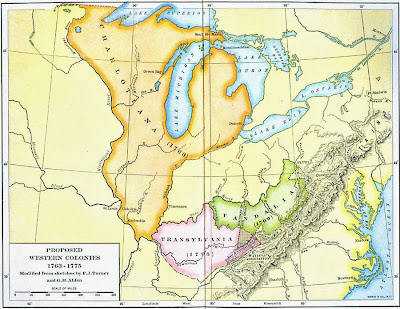 Check out those purple and green regions.  I remember first seeing the above map in a historical atlas in my elementary school's library.  The idea that there once was a proposal to craft mid-western states called "Transylvania" and "Vandalia" blew my little mind.  Can you imagine TFC (Transylvanian Fried Chicken)?

Hmm, maybe that's all a bit too close to reality for fantastical role-playing.  How about if we zoom out by a few dozen orders of magnitude... 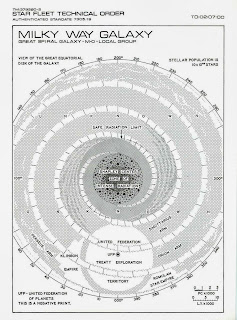 Cue the Alexander Courage theme song!  Above is a page from Franz Joseph's 1975 Star Fleet Technical Manual, which because of some strange licensing agreements didn't appear able to directly reference names like "Kirk" or "Spock" -- though "Enterprise" was snuck in there.  Subsequent generations of fandom and TV shows may have changed the details, but the above is how I always think about that universe.  That page also introduced me to some real history, too!  :-)

Another way to be blinded by science (fiction) is to sit too close to the Sun... 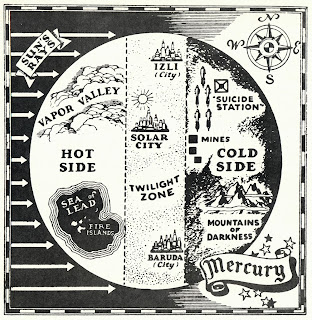 For a long time, astronomers believed Mercury was "tidally locked" like the Moon is in its orbit around the Earth.  They thought that there was a molten side that always faced the Sun, and a side that sat in eternal night.  In between the two was a region that you can see gave Rod Serling some great inspiration.  The above image is from the 1940s pulp adventures of Captain Future... I first saw it in an awesome book from the 1970s called An Atlas of Fantasy.

(FYI, Mercury isn't really tidally locked, but there are hundreds of planets around other stars that are!)

Lastly is probably one of the very first fantasy worlds I experienced through the magic of television...

I couldn't find an actual map of the Neighborhood of Make Believe, so I had to make do with this wide-angle photo of the original set.  You may not know a lot of things as a toddler growing up in the early 70s, but you know that the castle is on the left, the tree housing the owl and cat is in the middle, and the clock without hands is on the right.  Oh, and you also know that any museum that isn't also a giant merry-go-round is totally lame!  :-)
Posted by Cygnus at 7:05 PM