Adventuring with the D&D 30 Day Challenge

I'm going to continue bundling my answers to the ongoing September RPG house party.  The full list of questions is here, and below is this week's crop of answers...

1st edition AD&D.  I liked the Holmes basic box, but never looked back after getting those three original hardcovers.

I'm sure someone else has made the following analogy between the timing of D&D editions...
...and the timing of something else:
The analogy isn't perfect, of course.  (I'm not going to look for parallels between 1974's OD&D and American Graffiti!)  Looking forward, I suppose one can add to both lists:
I'm interested in seeing what both of those are all about, but I'm not holding my breath.  :-)

(8) Favorite Character You Have Played

There were two:  a human fighter named Arwold Archmalios, and a human cleric named Ingomer Lakhshmin.  The hodge-podge of names from different cultural backgrounds made (somewhat) more sense in the context of the Atlantis-like continent of their birth.

Arwold didn't have too many distinguishing personality traits, and was probably more a throwback to the featureless player stand-in PCs of late 70s OD&D.  He did carry around a sawed-off bardiche (which was usually a long pole topped by a curvy metal axe) that I managed to convince everyone did just as much damage as a full bardiche but could be wielded as easily as a sword.  My mental image of red-bearded Arwold was staring back at me from my AD&D Dungeon Master's Screen... 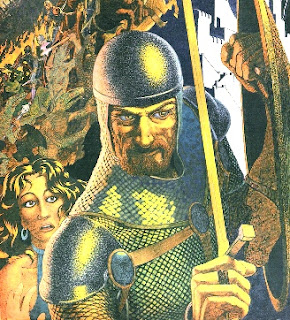 Ingomer's first adventure was L1: The Secret of Bone Hill, which contained the "Church of the Big Gamble."  The priests there were into randomness and worshiping the gods of chance and fortune.  I got the idea that Ingomer would be enthralled by this concept, and I searched through the Deities & Demigods book until I found Xochipilli, the Aztec god of gambling and chance, to be his patron deity.  That also was a decent fit for my crazy Atlantis-like continent!  :-)

They both made it up to something around 15th level before retiring and passing on the baton to the next generation.

Ummm... not sure I understand this one.  Unless the questioner is talking about licensed properties (like playing Harry Potter or Gandalf), the characters don't exist until you create them.  Even at that point, they're just a few numbers on a page.  You've got to run them around for a while, and let them grow into themselves.

Now, as a DM, I might look forward to "playing" the roles of a few unused NPCs that I've come up with over the years.  Gotta have good villains!  I've got a great voice picked out for Manannan of Montfort, for example.

(10) Craziest Thing That Happened [in an RPG adventure]

The square brackets above clarify my interpretation of this question.  I might get people in trouble if I were to answer that more broadly!

Thing is, this all was 30 years ago.  I remember some crazy-fun D&D sessions.  There was a time when some really innovative thinking and teamwork got the party across a deadly chasm.  The success bred a kind of natural high that lasted for a couple of days (in real time, not game time!) afterward.  But I couldn't even begin to remember enough detail to bring that to life again.  :-(

At the time, the favorite adventure that I created from scratch was a high-level extra-planar extravaganza, capped by a confrontation with Orcus.  I called it "War in Heaven," and might have even had The Battle of Evermore playing in the background or something.  Too bad it was a massive railroad from start to finish.

My friends and I started out with many a bog-standard "dungeon crawl," so when I got into DMing, I always tried to stretch beyond that.  The few times I started new first-level groups from scratch, I led off with B3: Palace of the Silver Princess.  I suppose it's an above-ground dungeon crawl, but there's less of a problem in trying to justify the existence of a large semi-abandoned mansion than there is explaining why there's a multi-level underground ecosystem filled with monsters and treasure.  :-)

Thinking back, I guess I did tend to prefer adventures with some component set in houses or castles.  That part felt like an open-ended game of Clue!  The Clockwork Mage was kind of like that, too.

I don't think I excelled at crafting these kind of mind-frack exercises.  I do remember once inflicting this quite sadistic, but ultimately harmless "trap" (from Dragon magazine #35) on my friends: