H is for Harlan

First name basis, definitely.  I've never met Harlan Ellison -- famed author of speculative fiction, Hollywood screenwriter, master of agit-prop for writer's rights, and all-around cultural gadfly -- but I have such an abiding love of his words (and an envy that I could live a life as energized as his) that I feel incredibly close to the dude.

They say that "A man with no enemies is a man with no character," and, boy, does that apply to Harlan.  The sheer hate that he's generated in (some) others could power a small city.  Maybe the raw, wild power of his creativity couldn't be confined only to the page, and had to blurst out into his interpersonal relationships.

Who knows... who cares.  It's his work I celebrate today.  I think he's the closest thing that we've got, as Americans, to someone like Jorge Luis Borges.  His approach to science fiction is at once super-intelligent (you'll never see him using tired tropes or talking down to readers) and uniquely phantasmagorical.  He may be famous for writing the episode of original Star Trek that tops most fans' list of favorite episodes, but his first draft (before others put their grubby hands on it) was even weirder and better. 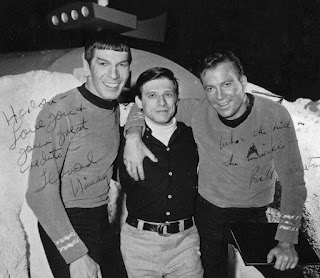 Like Borges, Ellison found that the short story was the perfect length for his mind to work its wonder.  Sometimes an even shorter format worked best for him.  My all-time favorite piece of his is "Eidolons," from 1986's collection Angry Candy.  Eidolons is a collection of short, 1-2 paragraph prose poems, wrapped together by a mind-itching frame story.  The original bits were composed to be spoken out loud, and were presented, I think, when he was guest hosting a sci-fi radio show.  Here's an example of just one of them, which conveys the intimate connections that words can foster...


"This is an emergency bulletin. We've made a few necessary alterations in the status quo. For the next few weeks there will be no madness; no imbecile beliefs; no paralogical, prelogical or paleological thinking. No random cruelty. For the next few weeks all the impaired mentalities will be frozen in stasis. No attempts to get you to believe that vast and cool intelligences come from space regularly in circular vehicles. No runaway tales of yetis, sasquatches, hairy shamblers of a lost species. No warnings that the cards, the stones, the running water or the stars are against your best efforts. This is the time known in Indonesia as djam karet -- the hour that stretches. For the next few weeks you can breathe freely and operate off these words by one who learned too late, by one who has gone away, who was called Camus: 'It is not man who must be protected, but the possibilities within him.' You have a few weeks without hindrance. Move quickly."

I should be giving you another quote from some other work, some other decade, but I can't help it.  One more from Eidolons:


"You woke in the night, last night, and the fiery, bony hand was inscribing mystic passes in the darkness of your bedroom. It carved out words in the air, flaming words, messages that required answers. One picture is worth a thousand words, the hand wrote. ‘Not in this life,’ you said to the dark and the fire. ‘Give me one picture that shows how I felt when they gassed my dog. I'll take less than a thousand words and make you weep for the last Neanderthal crouched at the cliff's edge at the moment he realized his kind were gone . . . show me your one picture. Commend to me the one picture that captures what it was like for me in the moment she said it was all over between us. Not in this life, Bonehand.’ So here we are, once again in the dark, with nothing between us in this hour that stretches but the words. Sweet words and harsh words and words that tumble over themselves to get born. We leave the pictures for the canvas of your mind. Seems only fair."

I hope these snippets are enough to give you a flavor for his writing.  (And, by the way, those 1000 words about how he felt when they gassed his dog? He wrote them, a decade earlier, and they make me cry every time I read them.  Google "Ahbhu" if you dare.)

Yes, Ellison can inspire, but he's also darned funny!  Some of his short stories are nothing more than a long, slow-burn build-up to a punch line -- and more often than not, it's well worth the wait.  He also wrote hundreds of TV and movie reviews, and whether they were praises or takedowns (usually the latter), his passion and humor burned through the pages.

Harlan Ellison will turn 79 this year.  I hope he's with us for a long time to come.
Posted by Cygnus at 8:15 AM