C is for Charles Cameron 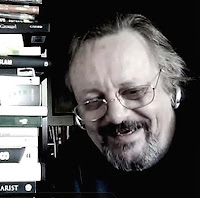 Hey... it's someone I actually have met!  Charles Cameron doesn't have a Wikipedia page, but he does have a 2002-era home page, a wordpress blog last updated in 2009, and a more recent association with a cool-looking creative project called Sembl.  He describes himself as a writer, poet, teacher, and game designer.  The guy has led quite an interesting life -- I'm not sure if I should list the famous personages from the worlds of art and religion that he's crossed paths with over the years.

I've mentioned Charles on this blog a few times already, and I've referred to him as my own mentor in a quest to bring Hermann Hesse's "Glass Bead Game" (GBG) into the real world.  One of my first posts to this blog was a summary of his own playable GBG variant Hipbone, and I've played around here and here with his idea that the basic "building blocks" of the GBG are "pairings" of two ideas that contain a chiaroscuro of similarities and differences.

He has been a vibrant proponent for a broad-based multimedia approach to Hesse's GBG as a game designer's holy grail, saying that


"...the ideas with which the Glass Bead Game is played may not only be drawn from any discipline, art or science -- they can also be expressed in musical, mathematical, textual, visual or choreographic form. The Game is not a Game of words only, but of ideas of all sorts, musical, verbal, numerical, visual, kinaesthetic... And this breadth of ideation, this willingness to include pictorial, sculptural, architectural and even choreographic ideas within the scope of the game is important, in my view, because it returns the Game itself to the body -- or, better, perhaps, heals the Cartesian split between body and mind and returns us to an earlier unity."

There is a transcendent aspect of the GBG implied by his final statement... that returning to an earlier unity ties in with Hesse's idea that playing the Great Game can be considered a kind of sacramental activity.  Charles also once wrote:


"The final issue that I think is important has to do with the meditative aspect of Hesse's Game. I find that when two 'items' from different branches of knowledge have a strong structural resemblance, that contemplating them together can lead to a kind of stereo effect, analogous to stereoscopic vision and stereophonic sound -- which I term stereophany with an 'a', by analogy with such terms as 'epiphany' and 'theophany', both of which refer to the 'shining forth' of some kind of divine essence."

I met Charles in person just once, at a conference in (I think) 1999.  My life has been made all the richer for my virtual interactions with him.  I hope he wouldn't mind if I quote a small bit of an autobiographical piece that he posted to a semi-private GBG mailing list more than a decade ago.  It's just a beautiful summary of "living the Glass Bead life..."


"I think that knowledge sticks to us -- all of us -- like burrs when we take a walk in the country.  My knowledge has the advantage that I've been footloose and fancy free, and gone where my interests took me -- and that all my life, I've been interested in strange rather than 'normal' things (meaning, not those things which obviously lead to social acceptance such as baseball stats, or to money such as the futures market or advertising and sales techniques or programming in C++, or indeed to academic advancement such as genuine in depth knowledge of a particular specialist field).  I've been interested, it seems to me, in glass bead game moves.  All my life.  With a passion.  And pretty much nothing else."