Why are we here, part deux

Earlier I splurged out some thoughts on some possible ways the Sun and Moon may have teamed up to help get life started in the tidal pools of young Earth.  But that's a separate issue from why WE are here -- we humans, who come pre-packaged (these days) with all this culture stuff piled up around us.

And we can also wonder "why now?"  There have been true homo sapiens walking around for something like 250,000 years, pretty much identical to us in terms of anatomy and brain size.  The Neolithic revolution could have happened at any time, but it waited until about 10,000-12,000 years ago. Agriculture, animal domestication, and the development of towns and cities took off like a rocket.  Other things like writing and commerce came not too long after.

It's probable that the end of the last ice age had something to do with it.  With more opportunities for movement and resettlement, formerly isolated peoples may have found new ways to interact with one another and share their cultural developments at a faster pace.

Or maybe the aliens came down to teach us?

No, I'm not really going there.  But I do want to bring up a kinda-sorta related idea proposed in the 1970s by archaeologist George Michanowsky.  He made note of the fact that there was a very bright supernova that exploded in the southern sky approximately 11,000 years ago.  It would have been much brighter than the planet Venus -- maybe almost as bright as the Moon -- and it would have shone for several weeks before fading.  There's no doubt that it would have been a shocker to ancient peoples.  Michanowsky wrote a book that described various ancient inscriptions that may be dim memories of people observing this event.

Michanowsky was also a bit of a mythmaker...


"The psychological and possibly environmental impact of the Vela starburst triggered a development in their culture that, in a short time span, made them something entirely different from what they had been before. For better or worse, humanity had thus quite suddenly bitten into the fruit from the Tree of Knowledge."

"My research indicates that this heavenly event became the source of the creation myths, the cosmological concepts, and the cultural traditions of much of our civilization."

Too far?  Maybe.  But it's still fun to think about, and a nice reminder that we're not isolated from what goes on out there in this huge, awe-some (literally!) universe. 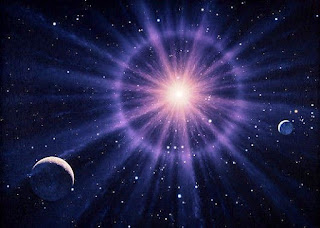