(Insert standard blogger apology for not posting more frequently... my teaching this semester is rewarding, but it's taking up a huge chunk of time.)

In the last post I began outlining a new game concept where players take on the roles of 1960s astronauts.  We follow both the missions and the personal lives of our intrepid sky pilots, and each success helps them "improve" in various ways.  They can spend their down time honing their technical skills, or they can choose to do things that may benefit them in other ways (who wants to go on Johnny Carson?).

But if one turn is one year, then players would reach the end of the Apollo period pretty quickly. We all know that things slowed down a bit after 1972.

What if they didn't?

In the comments on the last post, Porky predicted that this game could shift into alternate futures quite easily.  Back in the late 1970s and early 1980s, I was entranced by the grand goals of the L5 Society... 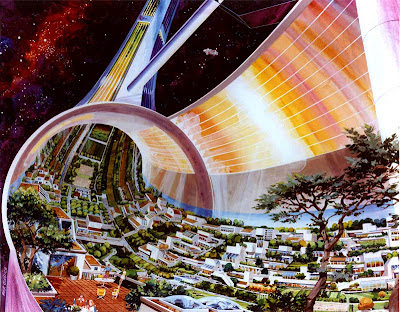 In the last post I threw out the phrase "engineering positivism" about the gung-ho early NASA period. That was nothing in comparison to the L5 peoples' attitude!  They were planning for the evolution of humanity into a fully spacefaring, space-living race.  I'm overjoyed that their full collection of L5 News PDF files is online... I'm going to read a bunch of them as inspiration for where I'd like to go with the game.

(There's a lot one could say about the sense of disappointment felt by many that these imagined futures didn't come to pass.  That's a whole 'nother post in itself.  I feel it to some degree myself, but I also cringe when I hear people say, even in jest, things like "I was promised a flying car! Where's my flying car?"  Come on... does this really look like a societal contract to anyone?)  :-)

For the game, I'm leaning in the direction of having the players choose from a set of several possible "Event packages."  (I could call them "decks" if I was settled on the use of cards, or "tables" if I was sure the players would all be familiar with D&D-style lookup charts... we'll see!)  These events will contain the possible space missions -- and their progressions and prerequisites -- as well as the "worldly" events that may occur randomly.  I'd also like to include guidelines for players to make up their own packages.  I'm hoping these will get rid of the need for a human "Game Master" (GM) and allow everyone at the table to actually play a character.

Some sets of events will be more "out there" than others.  As I work on these packages, I'll certainly start by emulating history and tracking some of the "retro-future" paths not taken.  But there's nothing stopping the game from containing increasingly sci-fi-ish elements such as alien first contact, self-aware AIs, terraforming Mars, and having to save the Earth from being hit by an asteroid.  It's a cliche, but the sky is the limit!