My new year's resolution for 2021 is to stay adamantly positive about the world.  In that vein, I'd like to recommend a few fictional universes for you all to get lost in.  If escapism makes you feel guilty, don't worry -- that's not all this is about.  Let's call it 25% getaway, 75% inspiration for the now.  Refueling rest stops for the soul.

I've got two primary recommendations -- for which the "delivery modes" may be as unconventional as the content -- and two secondary ones, which many of you probably already know about.

First, I'd like to tell you about a science-fiction podcast called The Strange Case of Starship Iris.  Created by Jessica Best, the first season was released between 2017 and 2019, and the second season just started earlier this week. 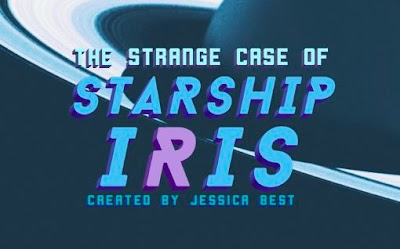 Okay, it's the year 2191, and humanity has spread to the stars.  A few years prior to the events of the show, there was a war with an enigmatic race of purple aliens known as Dwarnians.  During the war, there was a military coup that saw the human worlds taken over by a kind, benevolent Intergalactic Republic.  (Shh... they're listening.)  In the first episode, we check in on an IGR research ship exploring Planet 5925, and we begin to meet our characters.
The above summary doesn't do it much justice, because it's really about those characters.  The official podcast description says "It's a story of outer space, survival, espionage, resistance, identity, friendship, found family, romance, and secrets. (Also there's jokes.)"
To that I'll add: ramen noodles, linguistics, awkward crushes, and songs!  Also, the Dwarnians may be on their way to a place in my heart -- alongside the Bajorans, Minbari, and Time Lords -- as one of the few alien cultures in which I'd truly like to immerse myself.
The characters live in my heart, too.  I hope you get to know them.

Second, I'd like to recommend the world of Whisperwind, which is delivered in the form of ASMR videos on Youtube.  Yes, these kinds of videos are often the subject of giggles and disdain, but there are gems.  There are pearls.  Sometimes the talents of the artist are just perfectly matched with the medium, and the Story (capitalization intended) just breathes through the screen.

It's kind of a D&D world, with a mix of humans, elves, gnomes, goblins, werewolves, vampires, and such.  But there's amazing depth... multiple fleshed-out towns and cities, quite a few parallel plot lines, and occasional flashbacks to an adventuring party from hundreds of years ago whose actions continue to have an effect on the present.  Amazingly, it's also all told in the second person.  You are a character in this story, and over time we come to learn just as much about your backstory, motivations, and secrets, as we do about the other characters (nearly all of whom are played by Sage, the creator of this story).

Lastly, my other two recommendations.  I'll be quick: