A few weeks ago I saw an interesting Venn diagram posted on Twitter by someone named Christine Liu: 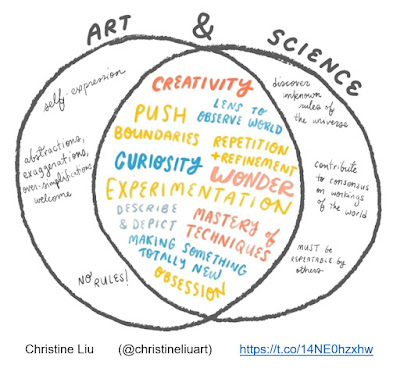 In hindsight, I guess it's not surprising to see so much overlap between science and art... after all, the education acronym STEAM (science, technology, engineering, art, and math) includes them all.  I just enjoy seeing these intersections, and I guess I've tried to make the central region of this diagram a focal point of this blog, too.

(Sometime, ask me about a talk I heard at a conference a while ago about how astronomer Johannes Kepler got the idea for one of his eponymous "laws" of planetary motion.  The answer, I say in Buzzfeed listicle mode, will surprise you!)

Today, though, my thoughts about this STEAMy synergy turn to the world of dice.  If you're coming here from the RPG world, you know all about them.  You may know that a two-handed sword does 3d6 damage against large opponents, and no speed factors will tell you otherwise.  You may have been inducted into the illustrious Order of the d30.  You may have scratched your head about the fairness of some very non-Platonic Zocchi dice.

But did you know about how Vulcans use them?

Almost 30 years ago, Star Trek: The Next Generation brought back Leonard Nimoy as Spock.  That episode may have been a bit underwhelming in some ways, but it showed some interesting aspects of alien cultures that fans had been hungering to see for years (well... this fan, anyway, he said pointing two thumbs inward).

In the episode, a Romulan kid shows Spock a set of little dice-like blocks that supposedly convey "the syllabic nucleus of the Vulcan language."  In an episode of Star Trek: Picard from just a few weeks ago, those dice showed up on the desk of a Vulcan admiral.  Since we never got a good look at them, I always just assumed they were either cubes or four-sided dreidels (since Nimoy had a history of using elements of his Orthodox Jewish heritage in creating bits of Vulcan culture).

But no!  An enterprising (heh? heh?) fan found pictures of the actual props from 1991 and posted some detailed shots...

There are some shapes here that RPG veterans have probably not seen:
However, if you were around during the ancient Han dynasty, you may remember either the 14-sided one or the 26-sided one (with 8 of its corners minimized to give it 18 rounder sides) as dice for the Chinese board game Liubo.  Some random examples from Google image search... 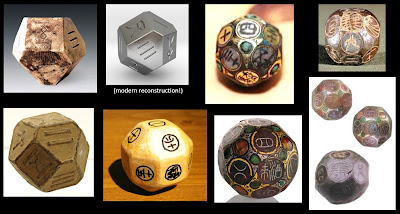 Where was I going with this?  Oh, the ART of it all.  It's kind of amazing how these uniquely deterministic 3D geometries can be used (hacked?!) to give our brains randomized input that assists in our creative endeavors, be they games or divination or actual art pieces.  They all have the capacity to instill wonder, push boundaries, and do the other stuff in the middle of that STEAM diagram at the top of this post.  Occasionally one also finds designers of Glass Bead Games employing randomness as a spur to creativity, too!  I keep ruminating on becoming one of those designers someday, so these posts are a set of running notes that may someday be assembled into something bigger....