As player characters explore their imagined worlds, they get better at the skills they've chosen to specialize in: fighting, casting spells, sneaking around, etc.  In classic D&D, the number of Experience Points (XP) awarded at the end of an adventure depends on two main things: foes defeated and treasure gained. Sometimes there could be special awards for evocative role-playing or the completion of specific "in-story" objectives.

As a DM in the 1980s, I dutifully tallied up the XP values of monsters killed and gold pieces gathered, and occasionally tossed in another few hundred XP for other things, but it never seemed quite right. I now see that many other gamers went in the completely opposite direction: just awarding a fixed amount of XP per session, or per adventure (however that was defined), and usually also dividing up the XP evenly between all player characters.

For Homebrew '82, I think a happy medium between those two extremes is needed. I've decided to take a plunge and forgo the detailed XP for monsters and treasure, but still aim for a "crunchy" system that reflects how well each player played, and/or how well each character exercised his or her skills.  So here's Cygnus' attempt at a meritocracy-based XP system, sans monster/treasure tallying:

XP is earned for each hour of play, in real-life player time. The number of XP depends on how much the PC participates in activities relevant to their class, and on how difficult are the challenges faced by the PC. For each hour, the number of XP earned is determined by the GM finding the proper number in the following chart and multiplying it by the square root of the PC's current level (which I hope will make more sense below). A GM can average together an entire session's play, or keep track of what goes on hour by hour.

I'll just give short definitions of the "grades" for participation and difficulty.


(A) legendary deeds were done, (B) out in front of the pack, (C) engaged with events, but usually "in the middle of the fray," (D) on the fringe, vicarious participator, (F) passive and relatively uninterested.

For the participation grades, it's class-specific activities that should count.  A magic-user who just fights with his or her dagger (and does nothing magic related) should get a D or F even if lots of creativity was shown. Note that the player's extrovertedness (or acting skills) aren't being judged here, nor is whether the challenges were won or lost -- just that they were faced!

I should note that this system is definitely more subjective than the usual way of summing up XP. It means judging quality, not measuring quantity. Thus, I think it works best when the players don't know how this particular sausage is made!

Okay, so why multiply by the square root of the PC's current level? Well, there are a few things to play with, here. I want this system to accomplish two things (which the monster and treasure XP tallies seem to accomplish automatically):

First, I think that players should receive larger XP awards as they ascend in experience level. There's something fun about seeing those awards go up, and something potentially dreary about having one's 10th level ubermensch get only the same kind of double-digit XP numbers that one got when just starting out.

Second, I wanted to keep the XP progression tables relatively simple and straightforward.  Here's the vanilla progression chart, which is customized for each class by multiplying each number in the chart by a class-specific number: 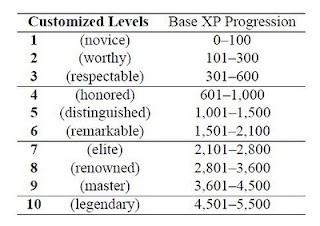 I was inspired by the customized classes that were devised by the late Paul Crabaugh and published in 1986 in Dragon magazine 109. (Jeff Rients blogged about it, but I don't know if I've ever seen Crabaugh's charts online...) For the standard 4 classes, multiply the above XP numbers by: 7 for fighters, 8 for magic-users, 6.7 for clerics, and 5.6 for thieves/rogues. I'll give a few other examples as well as the "construction rules" for classes in the Homebrew '82 players book.

But notice that the XP in this chart increases linearly with level - i.e., it takes you 7 times as much XP to get through 7th level than it takes to get through 1st level. If the XP awards per session increased linearly, too, it would take the same amount of time (roughly) to go up each level. I didn't want such "easy" progression (this not being 4e after all!), but I also didn't want the time to stretch out to impossibly long slogs at the higher levels.  Thus, the square root, which increases more slowly than linearly, but it still increases.
Posted by Cygnus at 8:04 PM