My previous Glass Bead Game related post left some frayed loose ends in my brain, so... anal-retentive chef that I am, I've got to tie them up...  :-) 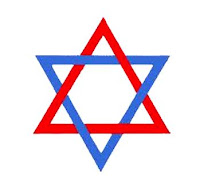 In Renaissance magic and occultism, the potent Star of David hexagram symbol was believed to be made up of two specific kinds of triangle:  the upward pointed red triangle of FIRE, and the downward pointed blue triangle of WATER.  The individual triangles are the standard alchemical symbols for these elements, and they make a lot of sense: flames are ever arching upward, and water is always on a downward trajectory, seeking its lowest level.  The combined hexagram is thus a symbol of balance and stability.

Fast forward to 1912. Leave it to Aleister Crowley, the Howard Stern of his day, to throw a monkey wrench into that nice state of repose.  In his Book of Lies (Falsely So Called), he suggested a switch of roles between the two triangles:

Aha, now the down-pointing fire triangle alludes to the descending flames of Pentecost. (Remember T. S. Eliot's dove descending?)  The other triangle now points our gaze, along with our prayers, toward the blue heavens above (in which one find the lark ascending!).  Rather than just sitting there in boring, static harmony, the two triangles are now reaching... arching... but never... quite... getting there.  Is this a dynamic equilibrium, or is it inherently unstable?  :-)

Crowley also hid some suggestive double entendre in the rest of that passage (it was in Chapter 69... nuff said), but where this set of ideas took me was back to music.  See, there's a matched set of red and blue (coupled with some, um, thunderous emotion) here, too... 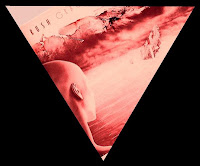 I've written a lot about prog-rock gods Rush.  Their 1984 album Grace Under Pressure wasn't quite a full-on symphonic theme album like some of their earlier ones, but it did have an interesting thread running through it:  Each song mentions the color RED at least once.  Despite the cold, icy sound to the music, the lyrics to all of the songs are certainly red-hot with a range of feelings.  Anger, grief, and fear are all represented, along with exuberance and joy. 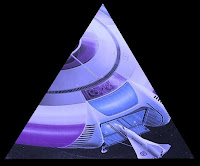 Flashing back to 1977, there's also Electric Light Orchestra's double album Out of the Blue.  Can you guess what color is mentioned in every song?  I'm not enough of an ELO fan to be familiar with even the majority of the songs on this album, but I've always loved Jeff Lynne's frequent use of the contrast between the blue sky of day and the black sky of night.  "Mr. Blue Sky" on this album invokes it, as does "Telephone Line" from the previous album.  They're both upward pointing, prayer-like entreaties, in a way.

Where else can we go with this?  The day/night contrast could be brought back to Crowley, who symbolized a state of quiet, star-lit spiritual evolution called NOX that is supposed to go far beyond the gaudy, bedazzled enlightenment of LVX.  Or you could take a left turn back to Canada and listen to Neil Young's haunting "Out of the Blue / Into the Black."  The fun of the Glass Bead Game is that the ideas and associations never end...
Posted by Cygnus at 8:38 PM