The 4th Regeneration of Christmas

The Fourth Doctor was played by the fantabulous Tom Baker from 1974 to 1981.  This is the Doctor that most Americans my age remember from PBS reruns back in the day, with the long multi-colored scarf, frenzied hair, and robot dog.  He was certainly my introduction to the franchise, and the one that I had the toughest time putting aside when the idea of other Doctors was introduced to me later on. 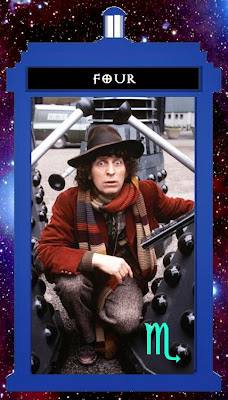 The Fourth Doctor was distinctly younger than any of his prior incarnations, and he had a frenetic, eccentric energy that seemed to light up any room he was in.  His collaborations with Earth-based U.N.I.T. tailed off, and he again took to the stars with his companions.  I remember prim Sarah Jane and wild, technology-phobic Leela, but he also traveled with a younger Time Lord (Time Lady?) named Romanadvoratrelundar (Romana for short).

"There's no point being grown-up if you can't be childish sometimes."

"Homo sapiens. What an inventive, invincible species. It's only a few million years since they crawled up out of the mud and learned to walk. Puny, defenceless bipeds. They've survived flood, famine and plague. They've survived cosmic wars and holocausts. And now, here they are, out among the stars, waiting to begin a new life. Ready to outsit eternity. They're indomitable. Indomitable."

The Fourth Doctor is a SCORPIO.  Again, I'm surprised at the way this Zodiacal progression continues to fit with each incarnation in turn.  (In case you haven't realized, we're just going sign by sign with the Sun through the year, not skipping around.)  Characteristics of this sign include "emotional, forceful, passionate, magnetic, and obstinate."  That's the Fourth Doctor to a tee.  Dawn Ellis described Tom Baker as "...a complete Scorpio in the best sense of the word -- intense and curious and crazy-passionate when faced with amazing mysteries."

Is it any surprise, then, that the New Year's Resolution for a Scorpio is to sit still once in a while?  :-)  Tumult and passion may be fun for you, but it's also important to stick with something long enough to really internalize all aspects of it, and to bring it to completion.  I'm not a Scorpio, but this is definitely a lesson I could learn better.

[See the introduction for more about sources and motivations for this series of posts.]
Posted by Cygnus at 8:05 AM